At that time
on my pillow
under roots of mugwort,
then too may these insects
cheer me with friendly notes.

Saigyo (translated by Burton Watson), in Burton Watson, Saigyo: Poems of a Mountain Home (Columbia University Press 1991).  The poem is a waka: five lines, with a syllable count of 5-7-5-7-7 in the original Japanese.

The poem is preceded by an introductory note:  "Written when he was feeling very downcast and discouraged and heard a cricket singing close to his pillow."  (Translated by Burton Watson.)  Watson provides an explanatory gloss to the poem :  "Saigyo is imagining the time when he will be in his grave."  Ibid, page 129.

The poem brings to mind Thomas Hardy's many poems about our life underground after death:  the conversations that are for ever taking place down there among the denizens, most of whom seem quite content. Transformed (to use a typical Hardy word), yes, but still active and voluble. It is pleasant to think that, as we lie amidst the mugwort roots, we may hear the sound of singing crickets. 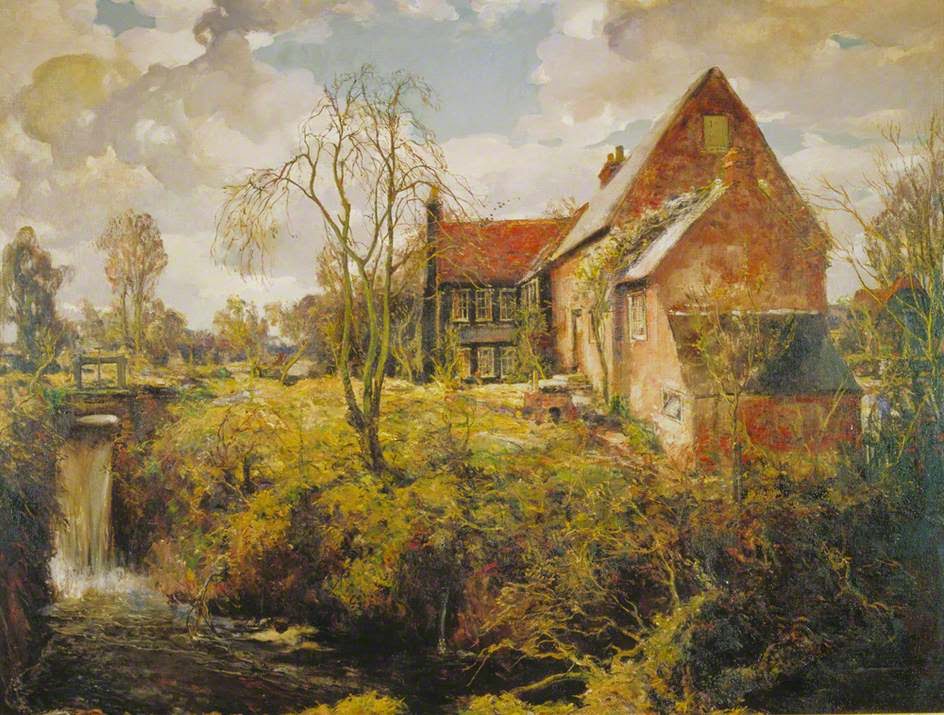 Grasshopper!
Be the keeper of the grave-yard
When I die.

Another pleasant thought, in my opinion.  It is not yet their season, but the sound of grasshoppers and crickets in the tall grasses is an essential part of much of the year, particularly the long afternoons and evenings of summer. To use Saigyo's characterization, they provide friendly company (am I falling prey to the Pathetic Fallacy?), signaling their presence from somewhere off in the fields. 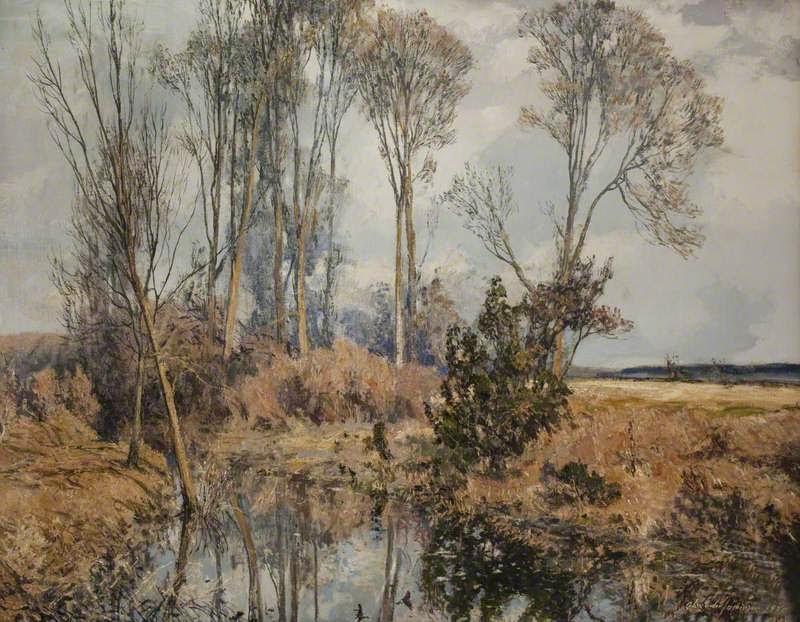 This may perhaps be the most famous cricket poem in Japanese literature:

How piteous!
Beneath the helmet
Chirps a cricket.

How piteous!
Under the helmet
a cricket.

The writing of the haiku was prompted by Basho's visit to Tada Shrine in Komatsu (a city in west-central Honshu, on the Sea of Japan) in September of 1689.  Basho "saw the helmet of Saito Sanemori, an aged warrior killed in a battle fought at nearby Shinohara.  Lest his enemies would know he was an old man, Sanemori had gone to war with his hair dyed.  After the battle, his severed head was examined by an enemy general named Higuchi Jiro, who cried out, 'How piteous!'"  Ibid, page 265.  The helmet may still be viewed at the shrine.

The last line of the haiku is a single word: kirigirisu (cricket).  Hence, Ueda's translation is literally correct, and "chirps" is an interpolation by Blyth.  However, given the nature of the Japanese language, Blyth's interpolation is not without authority.  A scholar of Basho writes:

I'm not sure that this degree of explication is necessary (or helpful).  I like the thought of a lone cricket chirping beneath the helmet on one of those hot, humid September days in Japan, as Basho looked on. 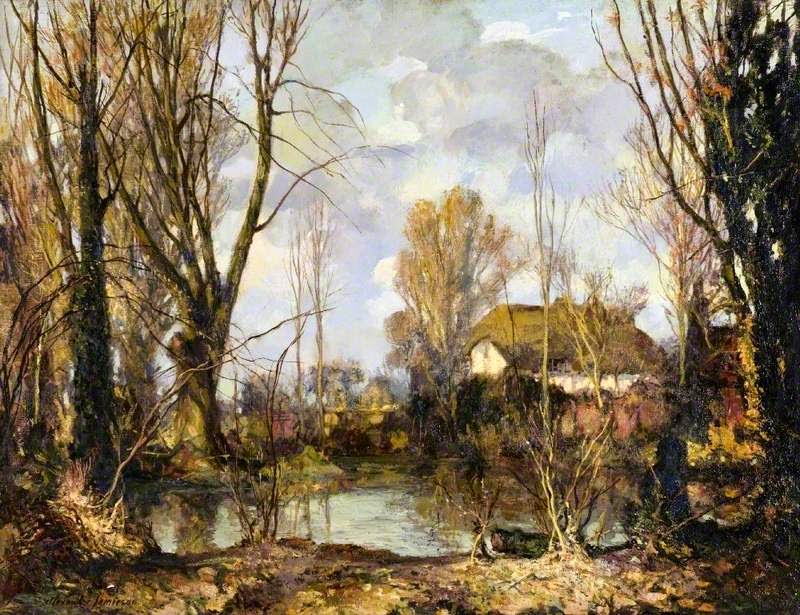 And how can we visit the subject of crickets and grasshoppers without bringing in Keats?

On the Grasshopper and Cricket

The poetry of earth is never dead.
When all the birds are faint with the hot sun
And hide in cooling trees, a voice will run
From hedge to hedge about the new-mown mead --
That is the grasshopper's.  He takes the lead
In summer luxury; he has never done
With his delights, for when tired out with fun
He rests at ease beneath some pleasant weed.
The poetry of earth is ceasing never.
On a lone winter evening, when the frost
Has wrought a silence, from the stove there shrills
The cricket's song, in warmth increasing ever,
And seems to one in drowsiness half lost,
The grasshopper's among some grassy hills.

Do I have the capacity to weave a web that encompasses Saigyo, Issa, Basho, and Keats, and that ties them all together across the centuries? Alas, no.  But here's a preliminary thought:  "The poetry of earth is never dead. . . . The poetry of earth is ceasing never."  Yes.  Whether we are above ground or below, the crickets and the grasshoppers will never still their song. 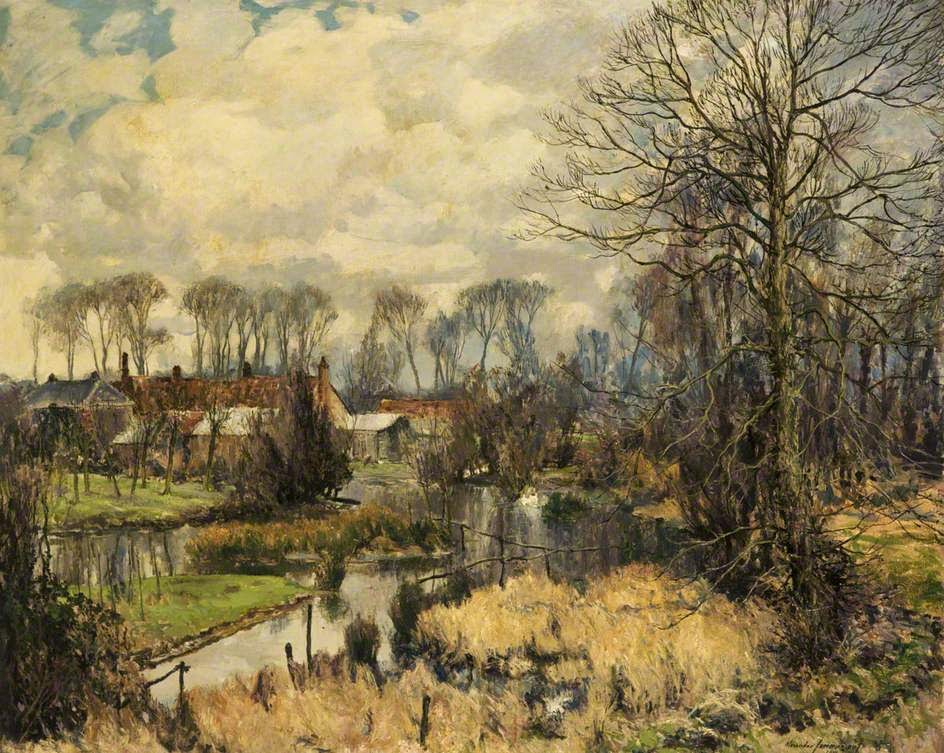 Keats did not say he would hear crickets from his grave, but in a remarkable feat of synesthesia, he says that he could hear the flowers which would grow on his grave.

"Shortly before his death, Keats asked Severn to go to see this cemetery because he wished to have a description of it. And so his friend Severn went there and after Keats's death he wrote: 'He expressed pleasure at my description... about the grass and the many flowers, particularly the innumerable violets... Violets were his favourite flowers, and he joyed to hear how they overspread the graves. He assured me that he already seemed to feel the flowers growing on him.'"

The story behind Basho's haiku reminded me somehow of the following poem by George Peele.

His helmet now shall make a hive for bees,
And lover's sonnets turn to holy psalms.
A man-at-arms must now serve on his knees,
And feed on prayers which are Age's alms.
But though from Court to cottage he depart,
His Saint is sure of his unspotted heart.

And when he saddest sits in homely cell,
He'll teach his swains this carol for a song:
Blest be the hearts that wish my Sovereign well.
Curst be the soul that think her any wrong.
Goddess, allow this aged man his right
To be your bedesman now that was your knight.


Why? I admit, this has nothing to do with crickets. But where Saito Sanemori decided to fight despite his age, the subject of Peele's poem accepts age and resigns. With Basho it was the cricket, here the bees take over the helmet, sign of human ambition and restlessness.

The poem has been set (slightly modified) by the young Gerald Finzi, coupled with another one by Ralph Knevet and called "Farewell to Arms". Later Richard Rodney Bennett set the same two poems under the same title for choir and cello.

This is my first comment this year. I am a bit late but I wish you all the best for 2015!

Mr Floyd: Wonderful! This is new to me, and I greatly appreciate your sharing it. "He already seemed to feel the flowers growing on him" is beautiful.

Mr Richter: It's very nice to hear from you again. Happy New Year to you as well!

Thank you very much for sharing Peele's poem, which is lovely. It provides a fine complement to Basho's haiku -- both in a general sense, and, of course, with respect to the contrasting images of the helmets of the elderly warriors. "His helmet now shall make a hive for bees" is amazing. I won't forget it.

And thank you for once more sharing your knowledge of song settings of poems. I have since found performances of both the Finzi and Bennett pieces on the Internet. Bennett is new to me, and his piece is beautiful. I found a performance by the Cambridge Singers, from an album titled "Sea Change: The Choral Music of Richard Rodney Bennett." I intend to explore his work further.

As always, thank you very much for visiting, and for your thoughts. I look forward to hearing from you in the coming year.

Lovely to read "The Grasshopper and the Cricket" last evening when the snow was falling fast, oh fast here.
To me the epitome of summer is in the lines: " ...when tired out with fun, He rests at ease beneath some pleasant weed".
Susan

Susan: It's good to hear from you again. I hope you have weathered the blizzard well. But there is nothing better than to sit beside the window and watch the snow fall while reading poetry, is there?

Your echo of "Snow falling and night falling fast, oh, fast" is perfect. Frost is always appropriate in a blizzard. But Keats's poem is a good companion at such a time as well, isn't it? And I agree with you that it has a wonderful summer feeling as well.

As always, thank you very much for sharing your thoughts.