I am always skeptical of people who display a high degree of certainty about how the World works.  Such certainty is often grounded in politics, science, or theology.  Or narcissism.  Or madness.

How can they be so certain?  Part of me (a very small part) on occasion envies them:  such certainty makes things seem simpler.  It appears to provide an explanation for what confounds us.  (Seem and appears are the operative words.)  The World is beyond peradventure a confounding place, so I understand certainty's attraction.

Alas, my sole certainty is this:  the World shall for ever remain a mystery to me.  Take a look out the window.   Everything before you is a beautiful enigma.

Now when the University students have abandoned
their game of bowls in the garden, with their cries of "Two" or "Six"
and the evening sky goes soured milk,

There are left the brightening windows of the rich owners of flats;
their meaningless finny gestures, dumb departures and entries;
a deaf man's theatre twenty times.

And quite indifferent towards the students or the rich
there are left the children of the poor, playing tag on a sandy waste,
and miles off southward ring the trams.

Alone on a building site a watchdog stalks by the fire,
wooed and repulsed by the jump-away flames, or raises its head
at a barking that chips a hole in distance. 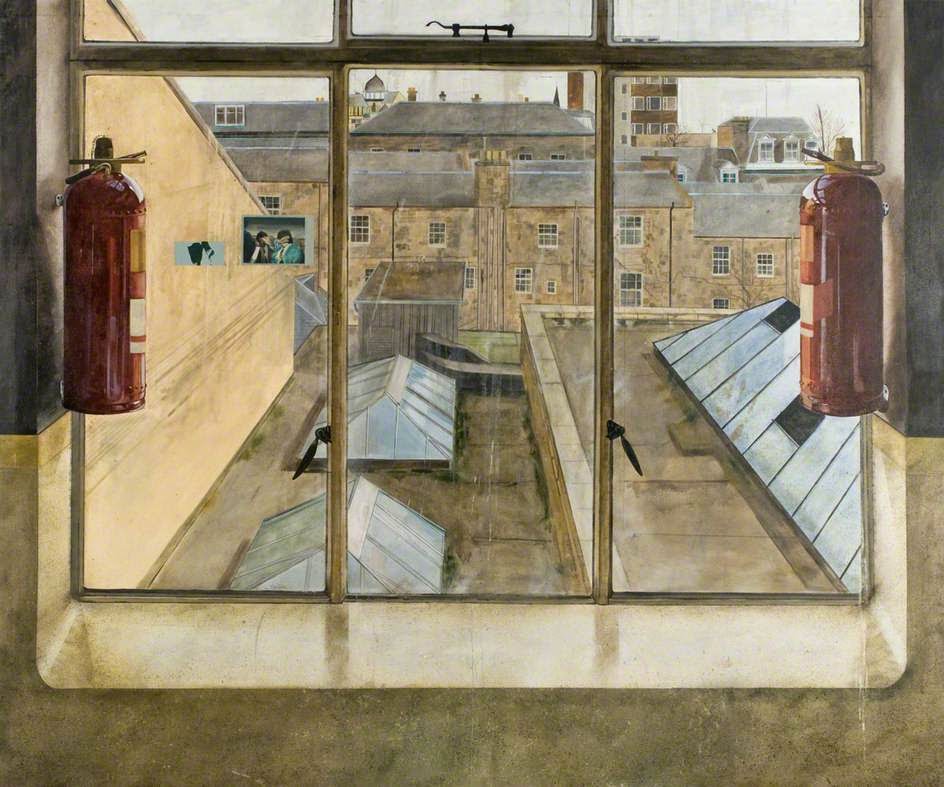 The quotidian (I use "quotidian" in an entirely affirmative, non-pejorative sense) is suffused with ineffable mystery.  Each of us, for instance: quotidian souls, each with infinite value.

I admire Coleridge's deference and discretion.  She speculates, but she does not attempt to caricature or pigeon-hole the man.  And her speculations are gentle and lovely:  "I think his heart is tranquil, from it springs/A dreamy watchfulness of tranquil things,/And not unblest." 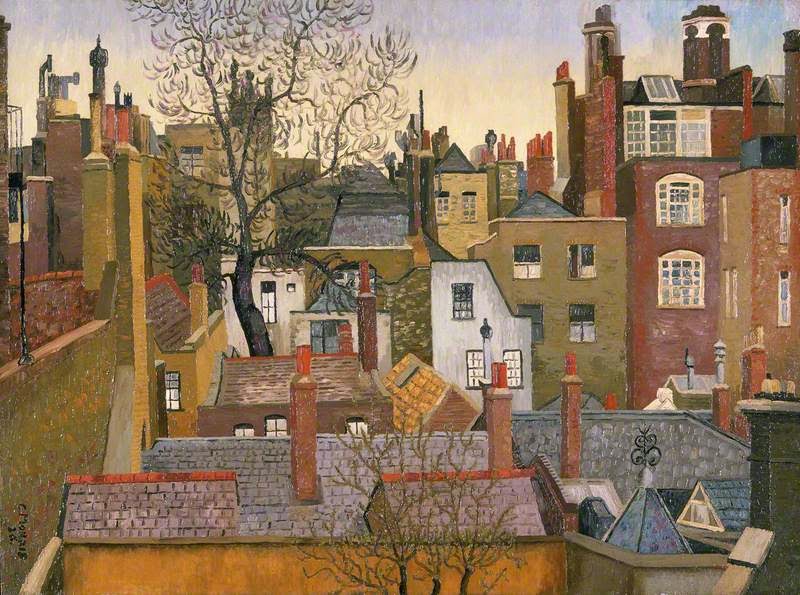 Do we ever truly know ourselves?  How, then, can we presume to know others?  The worst sort of certainty is that certainty which makes assumptions about the soul of another.

From the bay windows
Of the mouldering hotel across the road from us
Mysterious, one-night itinerants emerge
On to their balconies
To breathe the cool night air.

We let them stare
In at our quiet lives.
They let us wonder what's become of them. 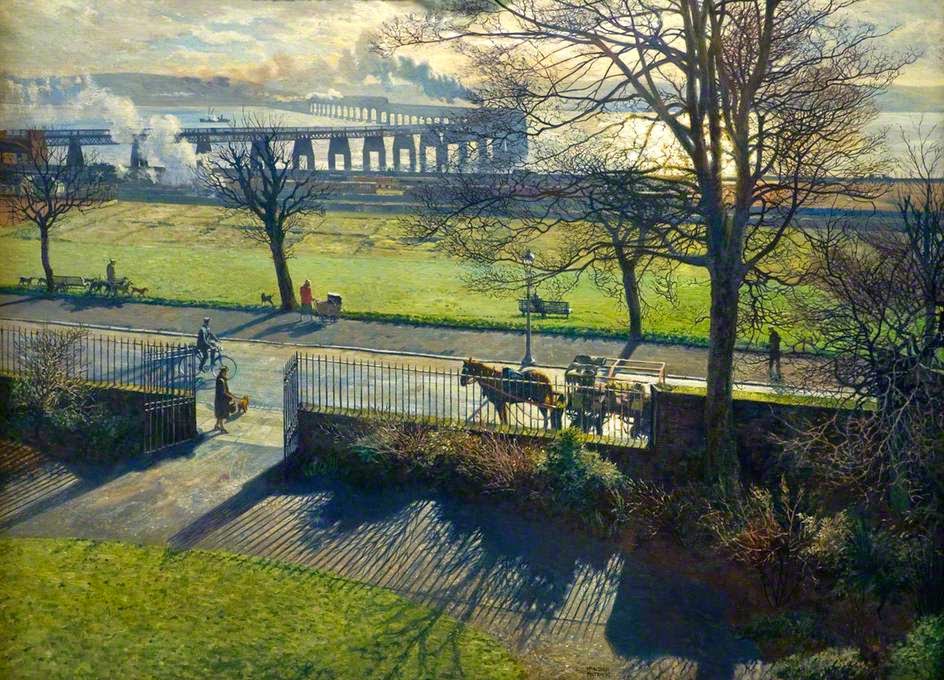 James McIntosh Patrick, "The Tay Bridge from My Studio Window" (1948)

"A single grain of rice falling -- into the Great Barn."  So writes Po Chu-i. Such a realization is a source of freedom, not a sentence of doom.

But then I drew up the curtain and looked out of the window.  Yes, there it still was, the old External World,  still apparently quite unaware of its own non-existence.  I felt helpless, small-boyish before it:  I couldn't pooh-pooh it away.

There it is.  Out into the World you go.

Looking through a narrow window day by day
They behold the world go by on holiday;
Maid to man repeating "Love me while you may,"
All go by them, none returns to them:  they stay.

They behold love pass, and life passing away,
And each day puts on the face of yesterday,
And their hearts are sighing "Love me while you may,
Love is lovely, life is passing:  'tis to-day."

All shall be to-morrow, still the elders say;
Many lenten morrows come and pass away,
And the world goes by, and as of old time they
Looking through a narrow window watch the way. 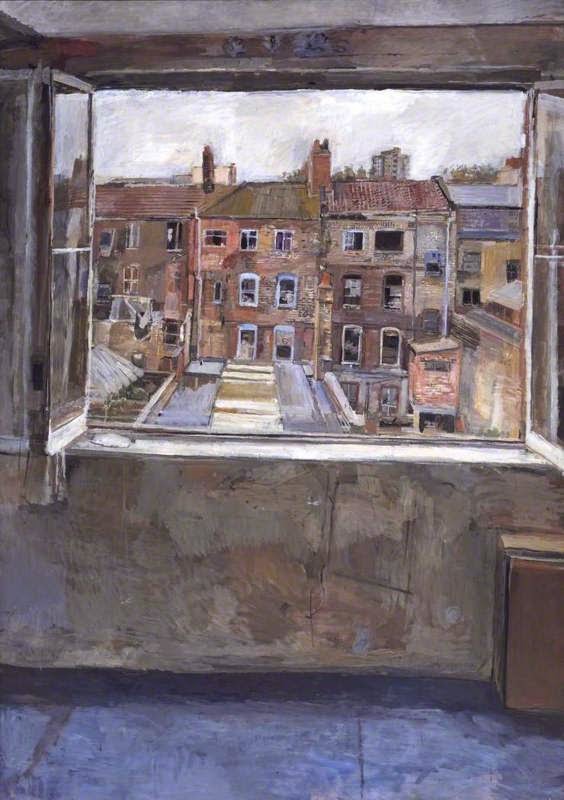 Was the Pine at my Window a "Fellow
Of the Royal" Infinity?
Apprehensions—are God's introductions—
To be hallowed—accordingly—
--Emily Dickinson, 797

Anyone can look from a window but not all those who look see the same things. Could it be that the sensibility that apprehends shapes what it see. Are some views clearer or truer? What role does interpretation play? Is the world full of symbols?

In the poem below Dickinson looks from her window and sees "a sea, with a stem." If farmers call the stem a "pine," she grants this denomination (just "an opinion) will do for them. It won't however do for her.

Can the "dumb" wind, the spice-laden air, the sun at its "commerce," which is, I take it, to reveal the wonder of creation, reveal, paradoxically, some sweet augury?

What she sees with her "inner eye," what she hears within, strengthen her faith.

When her eye is put out by lightless death and her ears stopped with clay, she announces that she will meet the immortality she apprehended from her window.

After all, she says "Apprehensions--are God's introduction-- / To be hallowed--accordingly."

So it's not the window that counts, this man-made aperture, but the "mind" that looks from the window and apprehends "God's introductions."

One might suggest that Dickinson who spent almost all her life looking through the same window saw more of the world's revelations and promises than he who would circumnavigate the Earth, hack his way through jungles, or climb high peaks.

This is so interesting to me as the idea of this exuberant certainty that so many seem to have is just such a puzzle. I was thinking about this the other day and here it is,beautifully illustrated in poetry and art on your blog posting today.
The world and its inhabitants are all a beautiful, sometimes terrible, mystery - how can we ever diminish it and each other by our limited knowledge.
Thanks for your thoughtful postings, as always.
Mary

Mr. Floyd: Thank you very much for the wonderful poem by Dickinson, and for your helpful commentary on it. As is often the case (and the fault is mine), she leaves me scratching my head a bit, but your thoughts make things clearer.

In any event, the image of the pine as a world (or universe) into and unto itself is lovely. I particularly like: "Was the Pine at my Window a "Fellow/Of the Royal" Infinity?"

She is absolutely right about the entire World being right there in front of us, in our backyard. This is something that the Chinese and Japanese poets write of often: it is an essential part of their feeling, thought, and art.

Mary: It's interesting that we were mulling similar things over at the same time. You use the right words: "exuberant certainty" is "puzzl[ing]" to me as well. If it works for others, that's fine (unless they start telling the rest of us how we ought to live our lives): I'm not offended or angered at their certainty, just mystified. And I do agree with you that certainty can lead to a diminishment of mystery and intimation.

Thank you very much for your thoughts, and for your kind words about the post. As always, it is a pleasure to hear from you.

A revelation. How often windows have symbolized a portal to the enigmatic nature of the world, portals, indeed, that embody the enigma. This must be what Phillip Larkin had in mind when he wrote, of high windows:

"The sun-comprehending glass,
And beyond it, the deep blue air, that shows
Nothing, and is nowhere, and is endless."

Mr McMahon: Thank you very much for your thoughts on windows, and for the lines from "High Windows," which had completely slipped my mind. They go perfectly here.

Which reminds me that Larkin gave us a few other fine poems about looking out of windows. For instance, "Sad Steps," in which he wakes in the middle of the night: "I part thick curtains, and am startled by/The rapid clouds, the moon's cleanliness." And this is one of my favorite stanzas by him:

I listen to money singing. It's like looking down
From long french [sic] windows at a provincial town,
The slums, the canal, the churches ornate and mad
In the evening sun. It is intensely sad.