"The Further One Travels The Less One Knows"

I'm not cut out to be a hermit.  There are certain insuperable practical obstacles.  To cite just one:  the lack of pizza delivery services.

But I am sympathetic to the idea of a such an existence.  Mind you, I am not a misanthrope.  I just prefer peace and quiet.  I won't willingly submit myself to unnecessary noise and annoyance.  For instance, the prospect of enduring our American presidential election campaign for the next 17 (!) months is enough to convert me into an anchorite or a stylite until after Tuesday, November 8, 2016.

Fortunately, we each have the power to create a hermitary wherever we happen to be at this moment.  Not a solipsistic, narcissistic alternative reality, but a vale of refuge.

The gnomic pronouncements of the Tao Te Ching often leave me confounded.  But I've always felt there is a fundamental core of truth (and basic common sense) at the heart of Lao Tzu's oftentimes circular and self-contradictory observations about how the Universe works.

No need to leave your door to know the whole world;
No need to peer through your windows to know the Way of Heaven.
The farther you go, the less you know.

Therefore the Sage knows without going,
Names without seeing,
And completes without doing a thing.

Here is an alternative translation of the same passage:

Without leaving his door
He knows everything under heaven.
Without looking out of his window
He knows all the ways of heaven.
For the further one travels
The less one knows.
Therefore the Sage arrives without going,
Sees all without looking,
Does nothing, yet achieves everything.

Ethereal and down-to-earth.  Evanescent and hard-headed. 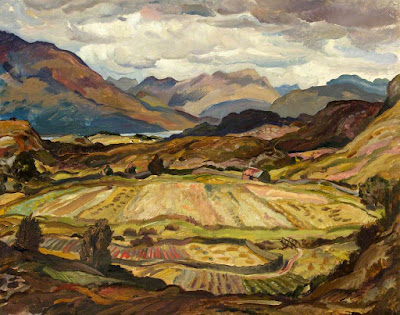 The advice of Lao Tzu can only take you so far.  There is still the matter of getting through an ordinary Wednesday afternoon.  "The farther you go, the less you know."  Yes.  A fine sentiment.  But the truth of it only emerges in the details, in the "small trifles."

What moves that lonely man is not the boom
Of waves that break against the cliff so strong;
Nor roar of thunder, when that travelling voice
Is caught by rocks that carry far along.

'Tis not the groan of oak tree in its prime,
When lightning strikes its solid heart to dust;
Nor frozen pond when, melted by the sun,
It suddenly doth break its sparkling crust.

What moves that man is when the blind bat taps
His window when he sits alone at night;
Or when the small bird sounds like some great beast
Among the dead, dry leaves so frail and light;

Or when the moths on his night-pillow beat
Such heavy blows he fears they'll break his bones;
Or when a mouse inside the papered walls,
Comes like a tiger crunching through the stones. 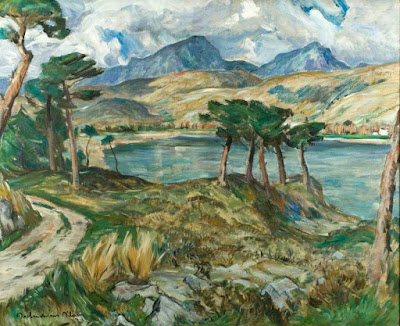 Davies's poem gives one pause.  It is one thing to indulge in reveries about a life of solitude, it is quite another to actually live that life.  Here is another way of looking at this hermetic world-in-a-room business.

"All this, however, does not mean that I am an avid lover of solitude who wishes to hide in the mountains once and for all.  I am more like a sickly person who has retired from society after becoming a little weary of mixing with people.  As I look back over the many years of my frivolous life, I remember at one time I coveted an official post with a tenure of land and at another time I was anxious to confine myself within the walls of a monastery.  Yet I kept aimlessly wandering on like a cloud in the wind, all the while laboring to capture the beauty of flowers and birds.  In fact, that finally became the source of my livelihood; with no other talent or ability to resort to, I merely clung to that thin line.  It was for the sake of poetry that Po Chu-i tired himself out and Tu Fu grew lean.  I am saying this not because I regard myself as an equal of those two Chinese masters in wisdom and in poetic genius.  It is because I believe there is no place in this world that is not an unreal dwelling.  I abandoned the line of thinking at this point and went to sleep.

My temporary shelter --
A pasania tree is here, too,
In the summer grove."

Basho (translated by Makoto Ueda), "An Essay on the Unreal Dwelling," in Makoto Ueda, Matsuo Basho (Kodansha International 1982), pages 120-121.  This is the final paragraph of a haibun, which may be described as "haiku prose, or prose written in the spirit of haiku."  Ibid, page 112.  "A haibun usually (though not necessarily) ends with a haiku.  The implication is that a haibun is a perfect prose complement to the haiku." Ibid, page 121.

Here is an alternative translation of the final two sentences: 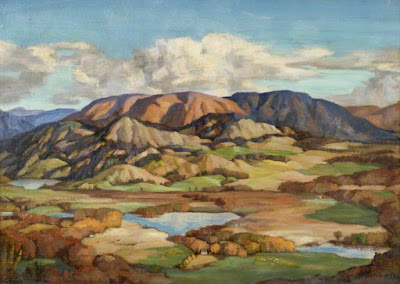 I agree with Basho:  I do not have it in me "to hide in the mountains once and for all."  On the other hand, Pascal makes a good point:  "I have often said that all the misfortune of men proceeds from their not knowing how to keep themselves quiet in their chamber."  Blaise Pascal (translated by Joseph Walker), Pensées (1670).

This morning, I sat at the front window and watched a couple of dozen sailboats run a race out on Puget Sound.  Behind them, the Olympic Mountains, snow-capped, stood serene, as mountains tend to do.  The boats moved in and out of giant cloud shadows drifting across the blue water.

I realize that I live in an unreal dwelling, a phantom dwelling.  But it will suffice.

In my hut this spring,
There is nothing, --
There is everything! 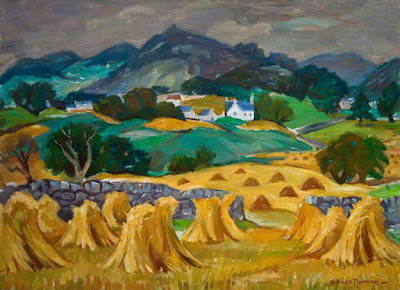 
Ah, two of my favorites when I need to get away from it all--novels, films, etc.--The Tao Te Ching and haiku. I have been away from them for too long, and I can sense it. The world is too much with me, or something like that.

I have the Hendricks translation. As you know, I'm a nut about comparing translations, so I have a translation by Victor Mair, which is based on a recent discovery of the TTC.

Without going out-of-doors,
one may know all under heaven;
Without peering through windows,
one my know the Way of heaven.

The farther one goes,
The less one knows.

For this reason,
The sage knows without journeying,
understands without looking,
accomplishes without acting.


But my favorite has to be _The Wisdom of Laotse_, edited and translated by Lin Yutang--probably because it is the first version I read and I'm now on my second copy.

Without stepping outside one's doors,
One can know what is happening in the world,
Without looking out of one's windows,
One can see the Tao of Heaven.

The further one pursues knowledge,
The less one knows.
Therefore the Sage knows without running about,
Understands without seeing,
Accomplishes without doing.


I like that "without running about." It's more suggestive of futile activity than is "journeying"

Thanks for reminding me of something I have moved away from and shouldn't have.

As usual, your posting arrives at a great time for me. Solitude is my security blanket these days. I celebrate solitude!

And there is this (from an exquisite poet and observer of life who offers many blankets of comfort):

Emily Dickinson - There is a solitude of space

There is a solitude of space
A solitude of sea
A solitude of death, but these
Society shall be
Compared with that profounder site
That polar privacy
A soul admitted to itself --
Finite infinity.

As I have noted in postings recently at Beyond Eastrod, I am on-the-road soon in search of finite infinity, solace, and solitude. And so it goes.

Fred: As you know, I'm similar to you when it comes to comparing translations, so I greatly appreciate your sharing these. There are differences, of course, but they all seem to be in the same ballpark, don't they? As you have remarked here in the past, reading a variety of translations gives us an idea of the basic gist of things, with due allowance for the peculiarities of each translator. Thank you very much.

But, of course, with any translation -- especially of the Tao Te Ching, which is so enigmatic -- one always has to wonder what we are missing that native speakers catch. Although I suspect that the Tao Te Ching may leave many Chinese scratching their heads as well!

As for the Blake: it goes well here. And it is NOT a cliche. In fact, I seem to recall that I quoted the first two lines in a post earlier this year, pointing that out.

As always, it is a pleasure to hear from you. Thank you for visiting again.

R.T.: Thank you very much for sharing Dickinson's poem, which is perfect in this context. I wish you well on your travels, which I have learned about previously by seeing your posts on Beyond Eastrod. I am envious of you: the list of places that you intend to visit is wonderful. I hope that you will provide us with updates on your journey on Beyond Eastrod.

Thank you for your stopping by again. It is always a pleasure to hear from you.

Ultra Monk: I'm pleased you liked the paintings. A quick tour of Scotland, in bright colors.

Thank you very much for visiting. It is good to hear from you again.

Saigyo: how drab his life would be without loneliness. I think Dickinson would concur.

If I no longer think
of reality
as reality,
what reason would I have
to think of dreams as dreams?

In this mountain village
where I’ve given up all hope
of visitors,
how drab life would be
without my loneliness

Mr Floyd: Thank you very much for the poems by Saigyo -- two of his loveliest, I think. They go well here. (It turns out that, coincidentally, I posted the first one here a few years ago. As you know, the life as a dream concept is one that recurs often in Japanese and Chinese poetry.)

Saigyo is also a fine choice given that his poetry, as well as the example of his life, were such a strong influence on Basho. In these two poems one can clearly see what Basho admired in, and what he absorbed from, Saigyo. As I'm sure you know, Saigyo figures in one of Basho's most famous philosophical/aesthetic passages: "One thing permeates Saigyo's tanka, Sogi's linked verse, Sesshii's painting, and Rikyu's tea ceremony. That is the spirit of the artist who follows nature and befriends the four seasons. Everything he sees becomes a flower, and everything he imagines turns into a moon." Records of a Travel-Worn Satchel. (Translated by Makoto Ueda.)

Thank you again. As always, I appreciate hearing from you.

Yes, they are all in general agreement, save, as you say, for individual differences in the translators. The Pascal quotation is also quite apt. Again, some ideas seem to be universal, but, as usual, with the warning that they shouldn't be carried out too far.

Fred: Yes, I don't intend to spend the rest of my life in my "chamber" as Pascal suggests: I like my afternoon walk too much. As I said in the post, I'm not cut out for that sort of thing, and, besides, I don't have the strength of character (or creativity) of people like Basho, Saigyo, and Han Shan. But we can always keep their examples in mind, and emulate them as best we can.

Thanks for the follow-up thought.