Spring has peaked.  Summer is near.  Yet earlier this week I found myself pondering the falling of the leaves.  My out-of-season thoughts were prompted by having come across this:

Far from your own little bough,
Poor little frail little leaf,
Where are you going? -- The wind
Has plucked me from the beech where I was born.
It rises once more, and bears me
In the air from the wood to the fields,
And from the valley up into the hills.
I am a wanderer
For ever:  that is all that I can say.
I go where everything goes,
I go where by nature's law
Wanders the leaf of the rose,
Wanders the leaf of the bay.

Giacomo Leopardi (translated by J. G. Nichols), in Giacomo Leopardi, The Canti, With a Selection of His Prose (Carcanet 1994).  The poem is titled "Imitation" because it is a translation by Leopardi from a poem in French ("La Feuille": "The Leaf") by Antoine-Vincent Arnault (1766-1834).

I consider Leopardi to be the King of Pessimism.  To wit:

"What is life?  The journey of a crippled and sick man walking with a heavy load on his back up steep mountains and through wild, rugged, arduous places, in snow, ice, rain, wind, burning sun, for many days without ever resting night and day to end at a precipice or ditch, in which inevitably he falls."

Yes, I know:  Whew!  And, mind you, this is the proverbial tip of the iceberg.  Leopardi, like Schopenhauer (who, not surprisingly, greatly admired him), ultimately came to the conclusion that, given our fate, we would be better off if we had never been born.  Again:  Whew!

In light of all this, the life of the ever-wandering leaf in "Imitation" seems like a carefree stroll in the park, doesn't it? 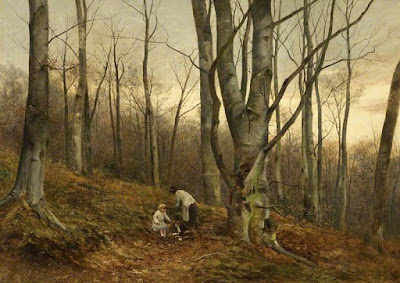 Leopardi's poem brought to mind one of my favorite poems by Derek Mahon (or by anybody, for that matter), which has appeared here before (in autumn).

As I have suggested in the past, one thing leads to another when it comes to poetry.  Perhaps it was Leopardi's line "I go where everything goes" that led me on to "Leaves," with its "dead leaves/On their way to the river."  In any case, I was now sunk deep in autumn, while outside all was green and blue and bright. 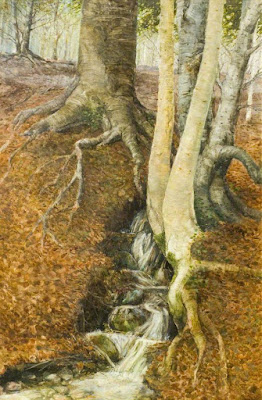 Six poems later in Leopardi's The Canti, I found this autumnal reverie:

Fragment: From the Greek of Simonides

All human things last only a short time;
The old blind man of Chios
Spoke but the simple truth:
As are the lives of leaves,
So are the lives of men.
But few there are who take
Those words to heart; while everyone receives
Unruly hope, the child
Of youth, to live with him.
As long as our first age
Is fresh and blooming still,
The vacant headstrong soul
Will nourish many pleasant dreams, all vain,
Careless of death and age; the healthy man
Has no regard for illness or disease.
But he must be a fool
Who cannot see how rapidly youth flies,
How close the cradle lies
To the funereal fire.
So you who are about
To step into the land
Where Pluto holds his court,
Enjoy, since life is short,
The pleasures hard at hand.

Coincidentally, I posted a different translation of Simonides's poem last October.  As I noted at the time, the "man of Chios" (line 2) refers to Homer, who was traditionally thought to have been born on Chios, an island in the Aegean Sea in the region known as Ionia.  The lines "As are the lives of leaves/So are the lives of men" echo a passage in Book VI of The Iliad.  The passage was rendered by Alexander Pope as follows:

Like leaves on trees the race of man is found,
Now green in youth, now with'ring on the ground:
Another race the foll'wing spring supplies,
They fall successive, and successive rise;
So generations in their course decay,
So flourish these, when those are passed away.

Here is a modern translation by Robert Fagles:

Like the generations of leaves, the lives of mortal men.
Now the wind scatters the old leaves across the earth,
now the living timber bursts with the new buds
and spring comes round again.  And so with men:
as one generation comes to life, another dies away. As long-time (and much-appreciated!) readers may have noticed, I am wont to present a coda to the topic at hand by presenting a brief Chinese or Japanese poem that seems to get to the heart of the matter.  Thus, the following haiku brings our autumnal idyll to a close.

What Issa has to say does not supplant what Leopardi or Mahon or Simonides or Homer have to say.  But he provides a lovely distillation that puts everything into perspective.

Come to think of it, here is a final thought by Leopardi:

"His amusement was to count the stars as he walked." 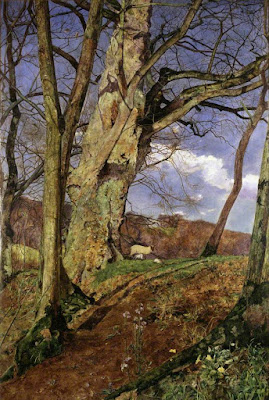 I love that Derek Mahon poem too. Personally, the turn to autumn is the one I find particularly difficult these days. It can be beautiful, but it also means that the dark winter is on its way - and even setting that aspect aside, it just seems that the start of autumn reminds me of an overwhelming number of things.

Thanks for the leafy tour. It reminded me of a poem I liked to open my poetry section with - cummings' l(a . In four words it revealed much of poetry's method, or what I like to call the criss in poetry - compression, rhythm, image, shape, sound - although as this poem is fundamentally unspeakable, sound wouldn't much count.

"One generation passeth away, and another generation cometh: but the earth abideth for ever."

I've seen the modern KJR translations, but they lack something. Perhaps it's as Frost once said: poetry is what gets lost in the translation.

Again, thanks for introducing me to poets and poems, paintings and painters I had never heard of and probably would never have, aside from you.

But we are all as an unclean thing, and all our righteousnesses are as filthy rags; and we all do fade as a leaf; and our iniquities, like the wind, have taken us away.
--Isaiah 64:6

Leopardi and Schopenhauer have nothing on those jeremiads one finds in the Old Testament.

Ms Aykroyd: Thank you very much for visiting, and for your thoughts. It's a pleasure to hear from you again.

"Leaves" was one of the first poems that I read when I discovered Mahon's poetry, and I was amazed. Its evocation of both the particulars and the general feeling of autumn is wonderful.

Your comment on autumn is interesting. It has always been my favorite time of year. As you suggest, there is a bittersweetness, even sadness, that accompanies it, and memories (both good and bad) seem to be part of those feelings. The swiftly passing beauty adds the final twist, doesn't it?

Brian: Thank you very much for the poem by cummings. It captures the essence of the season well, doesn't it? It does provide an interesting introduction to a course on poetry -- poetry pared down to its essentials, as you suggest. Haiku-like, I think.

I appreciate your sharing it. Thank you for visiting again.

Fred: Thank you very much for your kind words. It's my pleasure to share the poems and paintings. I am always gratified and humbled when they turn out to be of interest to others as well.

Thank you for the quote from Ecclesiastes: it is very apt here. I agree with you on translations of The Bible: it is definitely the original King James Version for me. In addition, I also recommend the translations by William Tyndale: the Tyndale Bible. As you probably know, although Tyndale was executed for heresy, his translations make up a significant percentage of the KJV. His Old and New Testaments were edited by David Daniell and published by Yale University Press in the early 1990s. Daniell has also written a biography of Tyndale.

Your comment on life is perfect. That does indeed seem to be how it works. Which we eventually come to realize.

As ever, it's good to hear from you.

Anonymous: Thank you for the verse from Isaiah, which provides another perspective on the topic at hand. I agree with you that the jeremiads in the Old Testament can be harsh. But here's a thought: those jeremiads are delivered within the context of an overarching view of Existence: i.e., they are intended to convey a message from Someone out there. On the other hand, the message delivered by Leopardi and Schopenhauer is that we come from Nothing and will end in Nothing, and that our brief stay here is a series of misfortunes and self-deceptions. I'm not in a position (nor will I ever be) to confirm the truth or falsity of either view; but that of Leopardi and Schopenhauer seems a great deal more harrowing.

I may have said this before -- but I reserve the right to repeat myself as I become an increasingly senile curmudgeon -- so here it is: I am blown away by your elegant combinations of poems and paintings in each of your postings. Your feasts for my soul nourish me in ways you will never know. Thank you.

BTW, you have also inspired me. I have this morning picked up my tattered copy of Shakespeare's sonnets and poems, and I plan on beginning with Venus and Adonis; no, there is no direct connection to your posting, but you focus on poetry and images sends me back to some of my favorite words by my favorite writer.

Have a beautiful day!

R. T.: Thank you very much: that's very nice of you to say. I'm always gratified (and humbled) to discover that poems and paintings that strike a chord for me may resonate with others as well. So I greatly appreciate your kind words.

Returning to Shakespeare sounds like a fine idea! You have reminded me that it has been way too long since I did the same thing.

I hope that your travels are going well. Thank you again.

How interesting, in this season of towering leafiness, to be reminded of the beauty of bare trees. Susan

Susan: "Towering leafiness" is a wonderful description of this time of year. But, as you know, that's how poetry works: you never know where it may take you, so you follow.

I'm happy to hear from you again. I hope that you have been able to enjoy the "towering leafiness" in some of your favorite parks and gardens, especially in light of the winter you had back there. As ever, thank you very much for visiting.