I am always grateful for the unexpected gifts that poetry provides.  For instance, a few days ago I discovered this:

Her face was like sad things:  was like the lights
Of a great city, seen from far off fields,
Or seen from sea:  sad things, as are the fires
Lit in a land of furnaces by night:
Sad things, as are the reaches of a stream
Flowing beneath a golden moon alone.
And her clear voice, full of remembrances,
Came like faint music down the distant air.
As though she had a spirit of dead joy
About her, looked the sorrow of her ways:
If light there be, the dark hills are to climb
First:  and if calm, far over the long sea.
Fallen from all the world apart she seemed,
Into a silence and a memory.
What had the thin hands done, that now they strained
Together in such passion?  And those eyes,
What saw they long ago, that now they dreamed
Along the busy streets, blind but to dreams?
Her white lips mocked the world, and all therein:
She had known more than this; she wanted not
This, who had known the past so great a thing.
Moving about our ways, herself she moved
In things done, years remembered, places gone.
Lonely, amid the living crowds, as dead,
She walked with wonderful and sad regard:
With us, her passing image:  but herself
Far over the dark hills and the long sea.

Where had this poem been all these years?   What a beautiful and wondrous thing it is.

Because I am fond of the poets of the Nineties, I was familiar with a few of Lionel Johnson's poems, but this had eluded me.  As it happens, it is not typical of his verse, which usually consists of rhymed stanzas or non-stanzaic poems in heroic couplets.  In contrast, "A Stranger" is written in unrhymed blank verse.  I have the sense (and I may well be wrong) that Johnson was so emotionally taken by the woman who is the subject of the poem that he wanted to set down the experience with as much immediacy as he could.  In this, he has wonderfully succeeded.

There is a mystery at the heart of "A Stranger":  the mystery of the human soul.  To his great credit, Johnson  neither caricatures nor patronizes the woman:  he recognizes the uniqueness of her soul, and this is what moves him.  Yes, he does speculate, but he never violates the dignity of her soul. Pity is a difficult and delicate thing, for we can never presume to know what lies within the soul of another. 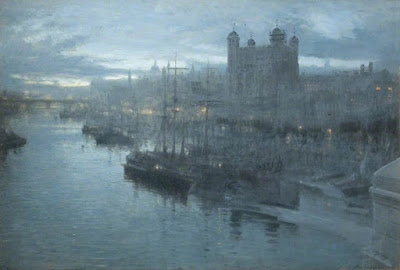 The mystery of each human soul also lies at the heart of a favorite poem of mine, which appeared here back in November of 2011.  As is the case with "A Stranger," it is a Victorian poem that does not sound or feel "Victorian" as we tend to think of that term.

The thing itself was rough and crudely done,
Cut in coarse stone, spitefully placed aside
As merest lumber, where the light was worst
On a back staircase.  Overlooked it lay
In a great Roman palace crammed with art.
It had no number in the list of gems,
Weeded away long since, pushed out and banished,
Before insipid Guidos over-sweet,
And Dolce's rose sensationalities,
And curly chirping angels spruce as birds.
And yet the motive of this thing ill-hewn
And hardly seen did touch me.  O, indeed,
The skill-less hand that carved it had belonged
To a most yearning and bewildered heart,
There was such desolation in its work;
And through its utter failure the thing spoke
With more of human message, heart to heart,
Than all these faultless, smirking, skin-deep saints;
In artificial troubles picturesque,
And martyred sweetly, not one curl awry --
Listen; a clumsy knight who rode alone
Upon a stumbling jade in a great wood
Belated.  The poor beast with head low-bowed
Snuffing the treacherous ground.  The rider leant
Forward to sound the marish with his lance.
You saw the place was deadly; that doomed pair,
The wretched rider and the hide-bound steed
Feared to advance, feared to return -- That's all! 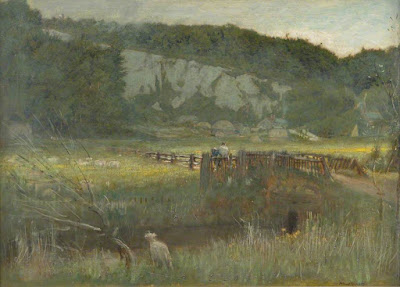 I have sometimes made hasty and ill-advised judgments about other people, which I will always regret.  Given how little we know about ourselves, we ought to tread lightly when it comes to the mystery of others.  We should not presume to know too much.

As long-time readers have heard here before, "we should be careful//Of each other, we should be kind/While there is still time."  (Philip Larkin, "The Mower.")  As Johnson and Warren show us, there is a thread that connects us all, if only we look.  But a mystery always remains unplumbed.

The previous owner:
I know it all, --
Down to the very cold he felt.

When I looked back,
The man who passed
Was lost in the mist.

A lantern
Entered a house
On the withered moor. 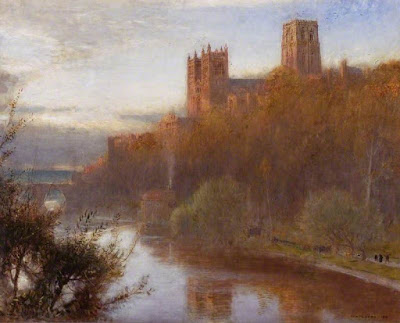 I've recently been reading through the two volumes of Anthony Hecht's "Collected Poems." I had not read the poem below. As you note, it's a delight to run across a poem you've never read before and find it stirring, plucking at the tuning fork of the imagination. I think Hecht's poem a splendid one about growing old.

Sarabande On Attaining The Age Of Seventy-Seven
by Anthony Hecht

The harbingers are come. See, see their mark;
White is their colour; and behold my head.
-- George Herbert

Long gone the smoke-and-pepper childhood smell
Of the smoldering immolation of the year,
Leaf-strewn in scattered grandeur where it fell,
Golden and poxed with frost, tarnished and sere.

And I myself have whitened in the weathers
Of heaped-up Januaries as they bequeath
The annual rings and wrongs that wring my withers,
Sober my thoughts, and undermine my teeth.

The dramatis personae of our lives
Dwindle and wizen; familiar boyhood shames,
The tribulations one somehow survives,
Rise smokily from propitiatory flames

Of our forgetfulness until we find
It becomes strangely easy to forgive
Even ourselves with this clouding of the mind,
This cinerous blur and smudge in which we live.

A turn, a glide, a quarter turn and bow,
The stately dance advances; these are airs
Bone-deep and numbing as I should know by now,
Diminishing the cast, like musical chairs.

I had never heard of John Warren before; I had to look him up. That is a really remarkable poem. I especially like the lines

"And through its utter failure the thing spoke
With more of human message, heart to heart,
Than all these faultless, smirking, skin-deep saints".

"Through" is an interesting word here. I'm not sure whether he means that the force of the craftsman's vision shone "through" the poor execution; or he is using "through" in the sense of "because" or "by reason of". If the latter, he is pointing to the pathos inherent in all human endeavour, and which is often apparent in the botched and bungled. The human, in fact.

It reminds me of an Italian short story I read many years ago, and have been unable to locate since. The writer describes the street musicians who play or sing for money in his neighbourhood. Some are very skilled amateurs or decayed professionals who perform with emotion. But the really affecting ones are the hopelessly unmusical bunglers who do their best and somehow transcend the ridicule of those who mock them.

Perhaps being reminded of our common humanity is a more profound experience than being overawed by talent. Or maybe I have completely misunderstood. Either way, this is a superb poem that I will remember. Thank you again.

Anonymous: Thank you for Hecht's poem, which is new to me. Very nice. An aside: whenever I come across "propitiatory," I am reminded of the final line of Philip Larkin's "The Building": "With wasteful, weak, propitiatory flowers." As it turns out, the two poems are on the same theme. (With Larkin's -- no surprise! -- being a great deal more harrowing.)

Sam Vega: It's very nice to hear from you again. I'm pleased you like Warren's poem: as I say, it's a favorite of mine. I came across it while browsing through Christopher Ricks's The New Oxford Book of Victorian Verse a long time ago, and was immediately taken aback. I've never forgotten it.

I agree with you on the latter use of "through," and, thus, my reading of the poem is the same as yours. The Italian short story that you reference is very apt. And I fully concur with your thought that "being reminded of our common humanity is a more profound experience than being overawed by talent." This gets to the heart of the poem, I think.

By the way (and you may already have come across it), if you wish to look into Warren further, the Internet Archive has a copy of a short book (61 pages) by Hugh Walker titled John B. Leicester Warren, Lord de Tabley: A Biographical Sketch, which was published in 1903. Walker notes the influence of Tennyson, Swinburne, and Browning on Warren. I searched out Warren's poetry after first coming across "The Knight in the Wood": although there are some nice poems to be found there (in the Victorian manner exemplified by the three mentioned above), nothing compares with "The Knight." But to be remembered for even one fine poem is no small thing (in my opinion). I'm privileged to do my tiny part to keep it alive.