We duly note observations such as these and then continue on.  "Death is no different whined at than withstood."  (Philip Larkin, "Aubade.")  Or something along those lines.

I am reminded of a haiku that I try to revisit each year around this time (and which appeared here a year ago).

Blyth suggests that Jokun is referring to the Japanese tradition in which, commencing at midnight on New Year's Day, the bells in Buddhist temples are sounded 108 times:  once for each of the unhealthy desires that we should strive to rid ourselves of.  This makes perfect sense.  Despite "implacable fate, and panic at night, and the strumble/Of the hungry river of death," there is always room for improvement while time -- ever tolling, of course -- remains.

We have no choice in the matter, do we?  Hence, no whining is allowed. But we ought to remain mindful. 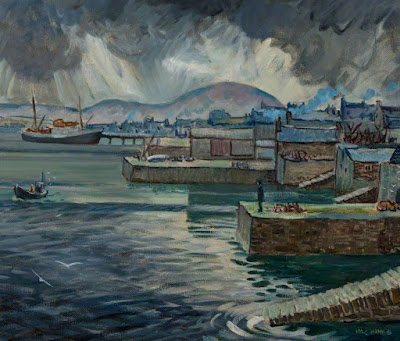 The particulars of day-to-day life in the Orkney Islands provide the basis for the poems and prose of George Mackay Brown.  But there is nothing parochial about the Orcadian world of which he writes.  It stretches from the present back to the arrival of the Vikings, and then disappears into a mysterious (apparently Celtic) pre-history.

It is a time-bound, yet timeless, world.  Although most of us have never been there, it is our World.

I lay on Gray's pier, a boy
And I caught a score of sillocks one morning

I laboured there, all one summer
And we built the Swan

A June day I brought to my door
Jessie-Ann, she in white

The Swan haddock-heavy from the west --
Women, cats, gulls!

I saw from the sea window
The March fires on Orphir

I followed, me in black
Jessie-Ann to the kirkyard

Gray's Pier is located in Stromness on Mainland, in the Orkney Islands. "Sillocks" are young coalfish.  "Hogmanay" is the Scots word for New Year's Eve.  Orphir is a parish on Mainland.

The following poem provides the other half of the Orcadian world. (Although the phrase "the other half" is perhaps too reductive and too simplistic:  the "halves" are interwoven and inseparable.  Earth and stone and sea and sky.)

Come soon.  Break from the pure ring of silence,
A swaddled wail

You venture
With jotter and book and pencil to school

An ox man, you turn
Black pages on the hill

A full harvest,
Utterings of gold at the mill

Old yarns, old malt, near the hearthstone,
A breaking of ice at the well

Be silent, story, soon.
You did not take long to tell

In another poem, Brown writes of "Crossings of net and ploughshare,/Fishbone and crust."  ("Black Furrow, Gray Furrow," in Fishermen with Ploughs: A Poem Cycle (Hogarth Press 1971).) 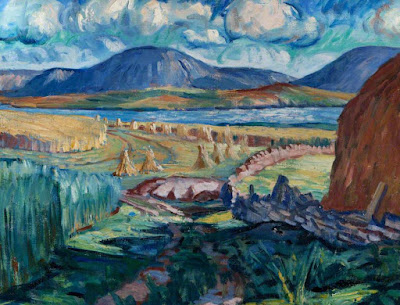 Truth and beauty reside in the particulars of everyday life.  "Gray's Pier" and "Countryman" are emblematic of the wondrous way in which George Mackay Brown gives us his Orkney world exactly as it is, in its lovely (and sometimes harsh) particulars, while transforming it into the World in which we all live.  And die.

"A mystery abides.  We move from silence into silence, and there is a brief stir between, every person's attempt to make a meaning of life and time. Death is certain; it may be that the dust of good men and women lies more richly in the earth than that of the unjust;  between the silences they may be touched, however briefly, with the music of the spheres."

George Mackay Brown, For the Islands I Sing: An Autobiography (John Murray 1997), page 181. 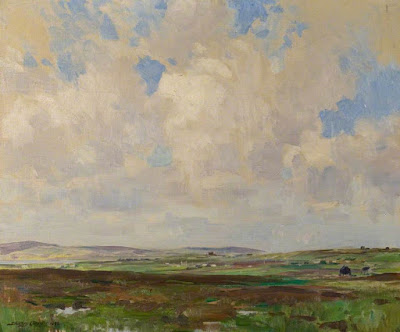 I came to your blog via the clerk at Oxford. I have enjoyed your posts for quite some time. Not just your reflections but the poetry and art which forms their bedrock. I have been educated on so many levels. thank you Mr Pertz and a happy new year to you.

Jennifer: Thank you very much for your kind words, which I greatly appreciate. I'm happy that you found your way here, and I hope you'll keep returning. Happy New Year to you as well!

Happy New Year from R.T./Tim at the new and improved http://beyondeastrodredux.blogspot.com/

Tim: Thank you. Happy New Year! I wish you well in the coming year. And I'm pleased to see the emergence of Beyond Eastrod Redux.

Mr Pentz, How lovely to see George Mackay Brown here, another long time favourite of mine. Unfortunately I've not had much opportunity to drop by over the Christmas holidays, busy with children, grandchildren and my wife's continuing slow recovery from her back injury. So I'd like to wish you a rather belated Happy New Year, and look forward to reading many more posts during 2016.

Mr Ashton: Thank you very much. I hope that you and your family had an enjoyable holiday season. Happy New Year to you as well.

I don't visit George Mackay Brown's poetry (and prose) as often as I ought to. This time I was prompted to do so by reading Ronald Blythe's essay "Going to Meet George," which is about Blythe's journey to the Orkneys to meet Brown. I suspect that you already know of the essay, but, if not, you can find it in Going to Meet George and Other Outings (Long Barn Books 1999). I suspect you know Blythe's work well, given your travels in Norfolk and Suffolk. There is also a fine essay on John Clare and walking in this collection.

As always, it is a pleasure to hear from you. I look forward to your continued presence here in the coming year.

Mr Pentz,Thank you for the information about Ronald Blythe's book, which I hadn't come across, though I've read other's by him. Sadly it is out of print in the UK. I shall try and track down a second hand copy. I wonder if you have read any of his Wormingford books. They are primarily columns from the Church Times and though based on the patterns of the Christian year cover cover many subjects; natural history, gardening, the seasons and village life. I'm not sure if they are available in the USA, but worth reading in my humble opinion.

Mr Ashton: Yes, I am familiar with the Wormingford series, but I only have one of the volumes: Out of the Valley (2000). I've been meaning to catch up with the others, but Blythe is hard to keep up with -- he is very prolific, as you know. In addition to the other Wormingford volumes, I've been intending to track down a copy of At Helpston: Meetings with John Clare (2011). Again, you are probably familiar with these, but I also recommend First Friends (about John and Paul Nash and Dora Carrington) and Places: An Anthology of Britain, which collects poems and prose by various authors (with a number of illustrations by John Piper).

Thank you very much for the follow-up thoughts.

Really like these poems by George Mackay Brown, particularly "Gravestone". I haven't come across his work before, but think I might have to track down a book of his work. Very enjoyable. Am currently dipping into E.J. Pratt and find a somewhat similar atmosphere in his poetry. Must be something to do with those wild, cold, northern climes.

Happy New Year and all that!

Deb: It's good to hear from you again. Happy New Year to you as well!

I'm pleased you liked the poems by George Mackay Brown. As I indicated in my response to Mr Ashton's comment, I ought to read Brown's poetry and prose more often. I've been enjoying him greatly this time around. I hope that you do look into his work further. His Selected Poems: 1954-1992 is probably the most readily available volume.

I had come across E. J. Pratt's name before, but I had never read any of his poems -- until reading a few on the Internet after receiving your comment. I can see why you noted a "similar atmosphere" in his and Brown's poems -- sea and rocks and mist. I discovered that Pratt was born and raised in Newfoundland, so the correspondences are not surprising.