Many of the blossoming trees -- cherries, plums, magnolias, dogwoods -- are now at their peak.  Above, below, and all around, it is a pink and white world.  Ah, if this world could freeze in place!  I understand what Wallace Stevens is getting at in "This Solitude of Cataracts":  "He wanted to feel the same way over and over. . . . He wanted his heart to stop beating and his mind to rest/In a permanent realization . . . Just to know how it would feel, released from destruction . . ."  Not in the cards, of course.

Night Rain -- Worrying About the Flowers

I sigh on this rainy late spring night:
the reds and whites that filled the forest are falling to the dust!
Late at night, my soul in dream becomes a butterfly,
chasing after each falling petal as it flutters to the earth.

As I have noted here before, during the Edo (or Tokugawa) period (1603-1868) a significant number of Japanese poets devoted themselves to writing poems in Chinese.  The poems they wrote are known as kanshi (a Japanese word meaning -- no surprise -- "Chinese poem").  Ishikawa Jōzan is perhaps the most admired kanshi poet.  He possessed a deep knowledge of both Chinese poetry (including its intricate and demanding prosodic rules) and Chinese philosophy.  Hence, it is not unlikely that he had the following passage from Chuang Tzu in mind when he wrote "Night Rain -- Worrying About the Flowers."

Chuang Tzu (translated by Burton Watson), in Burton Watson, Chuang Tzu: Basic Writings (Columbia University Press 1964), page 45.  A note: Chuang Tzu's family name was "Chuang;" his given name was "Chou."  He later came to be known as "Chuang Tzu" ("Master Chuang") because of his philosophical teachings.

O butterfly,
What are you dreaming there,
Fanning your wings? 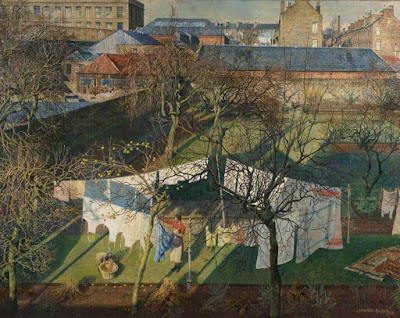 When it comes to the seasons, the wistfulness and bittersweetness quotients for spring and autumn are, as I have observed in the past, quite high.  So many reminders of our transience, and of the constancy of change!  Thus arises the irrational (or is it irrational?) desire to freeze things in place.

Here's a thought:  what if we could transform our existence into a spring or an autumn version of a snow globe?  Shake the globe, and you can live in an eternity of fluttering pink and white blossoms or, alternatively, in an eternity of flying and falling yellow, red, and orange leaves.  Would we in time find these eternal worlds monotonous?  I think so.  Wistfulness and bittersweetness are wonderful and essential human things, sorrow and all. 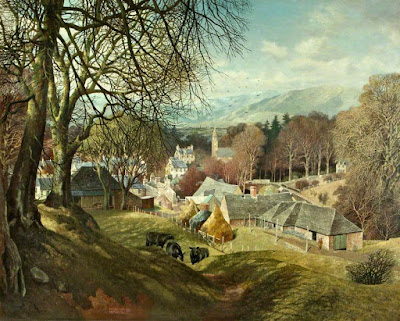 It's funny how life works.  When you are young, an afternoon can seem to last for ever.  But at some point you come to notice that a year -- even a decade! -- can pass in the blink of an eye.  The fluttering petals are trying to tell us something.

A Contemplation upon Flowers

Brave flowers -- that I could gallant it like you,
And be as little vain!
You come abroad, and make a harmless shew,
And to your beds of earth again.
You are not proud:  you know your birth:
For your embroidered garments are from earth.

You do obey your months and times, but I
Would have it ever spring:
My fate would know no winter, never die,
Nor think of such a thing.
Oh, that I could my bed of earth but view
And smile, and look as cheerfully as you!

Oh, teach me to see death and not to fear,
But rather to take truce!
How often have I seen you at a bier,
And there look fresh and spruce!
You fragrant flowers, then teach me, that my breath
Like yours may sweeten and perfume my death.

These lines in King's poem seem to anticipate what Stevens would say three centuries later in "This Solitude of Cataracts":  "You do obey your months and times, but I/Would have it ever spring:/My fate would know no winter, never die,/Nor think of such a thing."  A fond but futile hope. 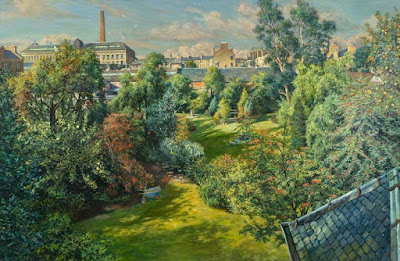 It seems to me that the appropriate response to all of this "change and chancefulness" (Thomas Hardy, "The Temporary the All") is gratitude. Gratitude (and joy) amidst the wistfulness and bittersweetness (and sorrow) of this fluttering world.

Once I see
the new green leaves,
my heart may take to them too --
if I think of them as mementos
of blossoms that scattered.

Is life as complicated as we make it out to be?  Are the particular times in which we live uniquely parlous and complex?  I wonder. 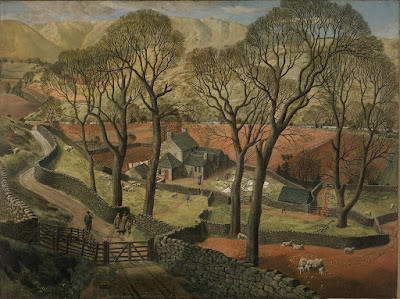 James McIntosh Patrick, "Springtime in Eskdale" (1935)
Posted by Stephen Pentz at 10:45 AM

The wistfulness and bittersweetness of Spring is certainly very intense. I was reminded of a little passage from a poem called "Advice for Someone Going into Prison" by Nazim Hikmet, a Turkish poet who spent most of his life incarcerated for political crimes.

Waiting for a letter inside,

staying awake all night, eyes glued to the ceiling,

is sweet but dangerous.

Look at your face from shave to shave,

forget how old you are,

protect yourself from lice, and from spring evenings

He's not the sort of poet that would sit comfortably with your normal favourites, but I think this is a lovely passage.

Thank you for your springtime collection! I should react otherwise, but it all depresses me. Here is why: We as finite beings have only one of each season -- spring, summer, autumn, and winter -- and poems with their focus on spring's renewals become reminders that flora enjoys seasonal renewal but every form of fauna will have only one bite of the apple. Well, nevertheless, I appreciate the beautiful bittersweet reminder that I will never again embrace springtime.

Sam Vega: Thank you very much for the lines from Hikmet, who is new to me. The line about spring evenings is perfect in this context. I found another translation of the poem on the Internet which translates the line as: "watch out for lice/and for spring nights." The gist is similar, but I prefer the translation you shared: I like "protect yourself from . . ."

As always, it is a pleasure to hear from you. Thank you very much for visiting again, and for sharing this.

Tim: Your final sentence has me worried. I know from reading your blog that you have been going through difficult times in terms of your health. Please know that you are in my thoughts, and that I truly hope that you WILL again "embrace springtime," and that we will be talking about it a year from now (and in the years thereafter). Please take care.

Wonderful poems - while reading the first one, my mind flew to the butterfly story so I was pleased to see your subsequent comments. Liza Dalby's wonderful book "east wind melts the ice- a memoir through the seasons" came to mind as she notes how the Japanese have "turned melancholy into an art form."[page 64]. She concludes with this - "But I wonder if the Japanese will preserve at least some of the shadows that we Americans tend to try so hard to sweep away with brooms of cheerfulness." [page 64].
It's a lovely book well worth a read.
As before, I wish to express gratitude for your always interesting postings. A gift to us, a pleasure for all.

Mary: Thank you very much for your kind words. I'm happy you liked the poems. I recently discovered "Night Rain -- Worrying About the Flowers," and Chuang Tzu's passage immediately came to mind. And, as you know, butterflies and falling blossoms are common presences in Japanese poetry -- either together or apart. So I thought the other poems fit well here.

Thank you for the quotations from Liza Dalby's book (which I wasn't aware of). Given her deep background in Japanese culture, her thoughts are illuminating. I agree about the "melancholy" and "shadows" in Japanese literature and art. For instance, I can sense this in Bashō, and even more so in Issa and Shiki, whose lives were so difficult. But, as you know, there is a great deal of joy as well, particularly joy in everyday things. Perhaps it is this contrast that makes the poetry so affecting. I suppose this takes us back to "wistfulness" and "bittersweetness."

As ever, I greatly appreciate hearing from you. Thank you for visiting again. I hope you are enjoying spring!

Yesterday, I got a chance to walk around the Tidal Basin, where the blossoms had started falling. Along the way, I saw a young woman seated an a gentle slope, her legs tucked under her. As a friend took her picture, she tossed up a handful of petals. Whether the photograph caught her behind the veil of falling petals, I don't know; I hope it did.

George: How fortunate you are! There are few better places in the world for cherry blossom viewing. Yes, I hope the photograph captured the falling petals. It sounds like a lovely sight.

It's very nice to hear from you again. Thank you for visiting.

Thank you for another thoughtful and beautiful post, Stephen. Allow me to add this from A E Housman's A Shropshire Lad:

Graham: Yes, that is a poem to be visited this time each year, isn't it? (Or even in the dead of winter, to cheer yourself up.) I am reminded of an anecdote told of J. L. Carr's time as headmaster of Highfields primary school in Kettering: "under the cherry trees, Carr would march his entire school in the spring, all chanting, 'Loveliest of trees . . . .'" Byron Rogers, The Last Englishman: The Life of J. L. Carr (Aurum Press 2003), page 153. Thank you very much for sharing it here.

And thank you as well for your kind words about the post. As ever, thank you for stopping by.