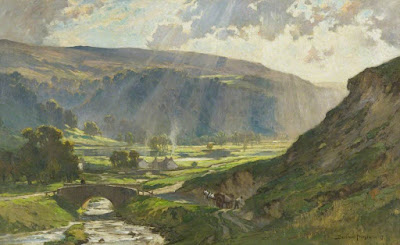 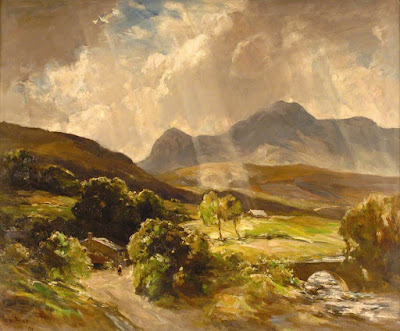 The Bright Field is lovely. Thank you for introducing me to it.

"Thousands of buds at the tips of twigs, yet each in its own singularity"

Not the Big Bang but the Big Bloom Theory. Not String Theory, but infinite universes according to Branch Theory.

“How do you know but ev’ry Bird that cuts the airy way,
Is an immense world of delight, clos’d by your senses five?”

Your "thousands of buds" thought brought ideas about cosmological origins right into our yard, filled with blooming red bud, crab apple and peach trees. "The Bright Field" gave me language for a daily experience, morning sunlight gleaming on leaves in the scrub border of the meadow where my dog and I walk every morning.

that was the pearl
of great price, the one field that had
the treasure in it

By the way. I didn't know Eleanor Farjeon wrote a book about Edward Thomas. I will read it. "Adlestrop" is one of my favorite poems. Thanks.

Nige: It's good to hear from you again. Thank you very much for your kind words about the post. Thomas and Larkin arrived together for me this past week, in this curious time: I felt the need to visit them again. I seem to recall you and I having similar thoughts about them: unfairly caricatured and simplified; the other side of them (luminous and open) often disregarded (or unknown) by many. Your recent post on "High Windows" comes to mind, in terms of putting things in perspective (as you've done numerous times over the years). (Of course, they each played a part in creating these caricatures of themselves, didn't they?)

I've been enjoying your level-headed and sensible comments on life these days. Best to look around for butterflies. And avoid supermarkets. And the "news".

I hope that all is well. Take care.

Mr. Hardt: I'm pleased you like "The Bright Field." It is one of my favorite poems. I don't think of it every day, but it is always there inside me, and some days it surfaces (or I go looking for it). I'm delighted you found it here. Thank you very much for visiting.

Stephen, Another delightful post. I was reading Larkin's The Trees yesterday evening, and like you The Bright field is one on my own favourites. You are right, such poems are there inside you always. Another for me is Norman MacCaig's An Ordinary Day which I read this morning.

I like so many other's am working from home now, so have more opportunity than usual to take a volume of poetry from my bookshelf during the course of the day.

Working on our allotment over the weekend, digging to keep warm as it was cold and blustery gave me time to notice the trees in the park bordering our plot coming into leaf and our own apricot tree in blossom. The same as last year and yet not the same, never the same because the beauty though it repeats is always as if seen for the first time, and the robins singing as if heard new and fresh.

Thanks Stephen – all is well with me. I hope with you too...

Mr. Maruskin: Thank you very much for those lovely thoughts. Those theories of the universe seem perfectly acceptable to me. And thank you as well for the wonderful lines from Blake, which are new to me. (My knowledge of Blake is embarrassingly limited, and I really should address it.) Every thing as "an immense world of delight": what a beautiful thought.

As for "The Bright Field" and sudden illuminations: the marvelous thing is that we never know when and where they will arrive.

I hope you can find the time to read Farjeon's book. It is both moving and illuminating. I don't have as much knowledge of Farjeon's work as you do, but my sense is that Thomas was an essential influence on her.

Thank you for visiting again, and for sharing your thoughts.

John: Thank you very much for the kind words about the post. I suspect you and I are the same: we revisit "The Trees" each spring. As is often the case, your comment will likely now set me off in another direction: off to visit MacCaig again! "An Ordinary Day" is a favorite of mine as well: ". . . how ordinary/extraordinary things are or// how extraordinary ordinary/things are" -- this says it all, doesn't it? And, further, as you point out in your final paragraph: "The same as last year and yet not the same, never the same." Which takes us back to "The Trees": "Begin afresh, afresh, afresh." As you say: "as if seen for the first time . . . as if heard new and fresh."

As always, it's a pleasure to hear from you. Thank you for visiting. I hope that all is well with you and your loved ones.

Nige: All is well here. Thank you for asking. Reading poetry and going for walks - fortunately, the weather has been surprisingly congenial for this part of the world the past few weeks, and it is a beautiful spring (while walking abroad at a safe "social distance," of course).

How profoundly I wish I could be standing on that bridge in Wharfedale, instead of in my New York City apartment, looking out at the many lighted windows in buildings all around. As I stared at the picture, & looked again at your identification of it, it registered with me that the date given for the painting is 1917. In Britain, surely a time as anxious as this is. I wonder if the painter was conjuring up the most peaceful & idyllic scene he could imagine.
(In fact I am as safe here, in a small & remarkably neighborly apartment building, as I could be anywhere. And spring is here, & I can walk to a bank of daffodils in Central Park, as I did this afternoon. And thanks to you, I can retreat to Wharfedale in spirit.)
Susan

Susan: Given the situation in New York City, I have thought of you, so I am relieved to hear from you and to find out that all is well, and that you are in a safe and hospitable place.

Yes, the bridge in Wharfedale is alluring isn't it? As I have said before, the paintings that appear here are all ones that I have imagined walking into, and living in. (Hardly an aesthetic criterion, is it? But that's how it is.) I, too, had noticed the 1917 date of the painting (as well as the 1918 date of the painting of Cader Idris) (although I didn't choose them for that reason; it was pure happenstance), and had a thought similar to yours: having to live through difficult times is nothing new to humanity, is it? As always, the predominant feeling should be one of gratitude to be here.

I'm happy to hear that you can get out for a walk now and then. I also hope that your love of poetry and books and art will be of solace in this time. Please take care.