Of course, one should never expect to witness the disappearance of human folly, malice, and bad faith while one is still above ground. "The vale of Soul-making" is no picnic, after all.  Not unexpected are the perennial ways of humanity: it has all been done, seen, and said before.  But it is tiresome nonetheless.  Best to let it all go.
Autumn Night: Depicting Busyness in the Midst of Silence
White-haired, in clear autumn touched by scenes and emotions,
among hills, moon my companion, living out the last of my life:
night deepens, no lingering echoes from the ten thousand pipes;
all I hear is the sound of the sōzu tapping the rock.
Ishikawa Jōzan (1583-1672) (translated by Burton Watson), in Burton Watson, Kanshi: The Poetry of Ishikawa Jōzan and Other Edo-Period Poets (North Point Press 1990), page 25.
Watson provides a note on the sōzu: "The sōzu is a device made of a bamboo tube that periodically fills with water from a stream, tips to pour out the water, and then returns to its original position, striking a rock and producing a sharp rapping sound as it does so.  It was intended to scare deer away from the garden."  Ibid, page 25. 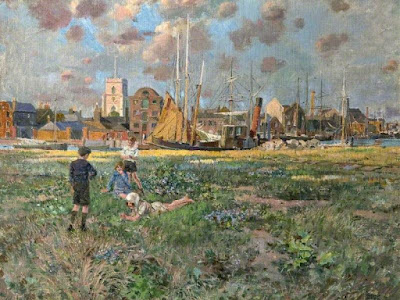 Eustace Nash (1886-1969), "Poole Quay from Hamworthy, Dorset"
Watson also provides a note to the phrase "ten thousand pipes" in the third line of the poem:  "The 'ten thousand pipes' . . . is a reference to the famous passage on the noises made by the wind in the forest in the second chapter of Chuang Tzu."  Ibid, page 25.  Here is a portion of the chapter referred to by Watson:
"Tzu-yu said, 'By the piping of earth, then, you mean simply [the sound of] these hollows, and by the piping of man [the sound of] flutes and whistles.  But may I ask about the piping of Heaven?'
"Tzu-ch'i said, 'Blowing on the ten thousand things in a different way, so that each can be itself — all take what they want for themselves, but who does the sounding?'
"Great understanding is broad and unhurried; little understanding is cramped and busy.  Great words are clear and limpid; little words are shrill and quarrelsome.  In sleep, men's spirits go visiting; in waking hours, their bodies hustle.  With everything they meet they become entangled.  Day after day they use their minds in strife, sometimes grandiose, sometimes sly, sometimes petty.  Their little fears are mean and trembly; their great fears are stunned and overwhelming. They bound off like an arrow or a crossbow pellet, certain that they are the arbiters of right and wrong.  They cling to their position as though they had sworn before the gods, sure that they are holding on to victory.  They fade like fall and winter — such is the way they dwindle day by day.  They drown in what they do — you cannot make them turn back.  They grow dark, as though sealed with seals — such are the excesses of their old age.  And when their minds draw near to death, nothing can restore them to the light."
Chuang Tzu (translated by Burton Watson), in Burton Watson, Chuang Tzu: Basic Writings (Columbia University Press 1964), page 32.  The brackets appear in Watson's original text.
Explaining Chuang Tzu's meaning, Watson says this about the use of the word "Heaven" in the passage: "Heaven is not something distinct from earth and man, but a name applied to the natural and spontaneous functioning of the two."  Ibid, page 32. 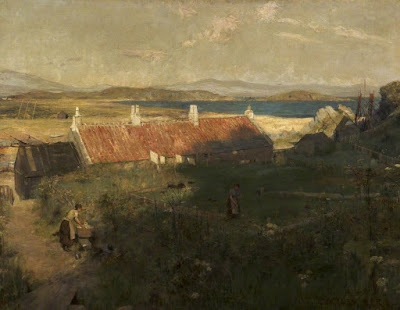 Charles Kerr (1858-1907), "Carradale"
Yes, it all becomes quite tiresome.  Best to let it go.  The soul's home is in other places.
In paddies among the mountains
girls transplant
rice seedlings —
the sound of their singing
drifts up from far away.
Ryōkan (1758-1831) (translated by Burton Watson), in Burton Watson, Ryōkan: Zen Monk-Poet of Japan (Columbia University Press 1977), page 30.  The poem is a waka. 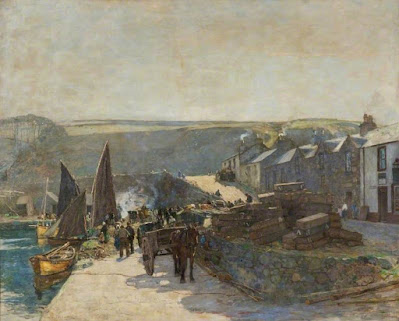 We all need some grace now, may your beautiful country find it. Thanks again for the words.

In her book "Vesper Flights," in a chapter titled "The Numinous Ordinary," Helen Macdonald speaks of books "that investigate the nature of our intuitions of the sacred, what Rudolf calls "The experience of the numinous" which is "a mystery outside the self that is both terrible and fascinating, in the divine presence of which 'the soul, held speechless, trembles inwardly to the furthest fiber of its being.'"

Macdonald, agreeing with those insightful Chinese poets you quote, goes on to say that the moments in nature "that provoke me in me a sense of the divine" are not grandiose things, God flinging his mighty hand across a quivering sky and scratching out a message, but are. on the contrary, "things small and transitory," like "the pattern of hailstones by my feet upon a dark earth." She is cut to the quick by "the face of a long-eared owl peering at me from a hawthorn bush." When these moments occur and she admits they do not appear often, they "open up a giddying glimpse into the inhuman systems of the world that operate on scales too small and too large and too complex for us too apprehend," She experiences a "mysterious terror and awe . . . the sense of something wholly other that renders me breathless and shaking." She then quotes four lines from Blake's "Milton," that somehow, she thinks, captures what she is trying to explain:

There is a moment in each Day that Satan cannot find
Nor can his Watch Fiends find it, but the Industrious find
This Moment & it multiply & when it once is found
It Renovates every moment of the day if rightly placed.

One cannot manufacture these moments, go on a mission to seek them, a sacred journey to find them: all one can do is make oneself available to them, and one way to do this is to pay close attention to the word outside of oneself. I think of Wordsworth wandering when he suddenly sees "a host, of golden daffodils; / Beside the lake, beneath the trees, / Fluttering and dancing in the breeze."

Perhaps the truth is we can find numinous moments in all areas of our life, though in the end numinous will appear only to the trembling soul prepared to experience it. Sick to death of vote counts and talking heads, weary of hearing about the plague at us these days (who cannot know it is real, that it mocks our silly pretense?), I, angry and frustrated, my problems and the problems of those near me beat at me, went into my kitchen and put on some coffee.

Coffee made, I poured a cup and sat down at my kitchen, where I was, to put it simply, in despair, enveloped by a cloud of hopelessness, and then, when I looked from the big kitchen, I saw a sparrow and a beautifully crested cardinal at the bird feeder outside the window. I watched them. For some reason the two birds made me aware of the plurality of creation. I saw, on the fence at the edge of the yard, a fat squirrel, and I thought, "It lives in the nest in the river birch tree outside my study window, this one and its family. I hear them every morning about eight when they exit their nest and trundle nosily over my roof.

And, Lo, I found a ruined day now saved, my mood transformed. Enough of mankind and his sickness with politics, enough of man and his things at least for this day. I called to my two little dogs. The three of us got into my truck and we drove to the park, where we took a placid walk in the woods, my eyes on the blue sky of a grand November day and the sheaths of fallen leaves. Graydon and Phoebe, half chihuahua and half dachshund and brother and sister, defined the world with their noses, though they paused now and then to take a hopeless charge at at always elusive squirrel, a ghost they will never catch. Is there not an infinite world beyond the arrogant mind of man? Can one imagine this world caring a fig about vote counting? Yes, I know: we have one foot in one world and one foot in another. What we need to know is when to step with the other foot.

This time of year, as I watch the candidates debase themselves (and us) in the course of their campaigns, I repeat over and over to myself the dictum of (who else) H.L. Mencken:

"The saddest life is that of a political aspirant under democracy. His failure is ignominious and his success is disgraceful."

Mr. Hill: What a wonderful and lovely thought. A peaceful and reassuring wish. I do hope you are right. Thank you very much. As ever, thank you for stopping by.

Bruce: That is marvelous. Thank you so much for sharing your thoughts and words. And thank you as well for sharing the passages from Helen Macdonald (who is new to me), and who, in addition to her own thoughts, provides us with those four wonderful lines by Blake -- "It Renovates every moment of the day if rightly placed": beautiful.

I completely agree with your thoughts that "all one can do is make oneself available to them" and "to pay close attention." All begins with those. And thus appear the sparrow and the cardinal at the bird-feeder outside your window. I was also delighted when you brought in Wordsworth: I was feeling his spirit in the passages from Macdonald and in the lines from Blake (not that they are directly drawing upon him, but in the sense that he abides in the same part of the World as they do).

Your description of your own day was moving, and heartening, good to hear, reason for hope. And I would choose a walk with a dog (or dogs) over "vote counts and talking heads" each and every time. And I do.

Again, thank you very much for your lovely thoughts.

Mr. Parker: Well, that's certainly right on the mark, isn't it? Thank you very much for sharing it: I hadn't seen it before. And your thought is on the mark as well. Thank you. One does feel sullied and insulted by the whole process, and this seems to be more and more the case with each election (and I can remember as far back as 1968). I suppose I would sound like an old codger if I were to say that it has only gotten worse. But I will say it anyway: it has.

I will shamelessly repeat myself: "Best to let it all go." Enough is enough. Life is too short. Whatever phrase one fancies. Which is why I am reading the poetry of Ryōkan and Ishikawa Jōzan this week. Two human beings who knew what they were about.

As always, it is a pleasure to hear from you. Thank you very much for taking the time to share your thoughts.