How To Live, Part Thirty: Happenstance

A few nights ago, as I drove to a restaurant to pick up dinner, a small grey rabbit, white-tailed, began to cross the street in front of me -- distant, in no danger.  I stopped to let it pass.  Illuminated in the headlights, it paused for a moment, looked in my direction, then continued on, scampering toward the bushes in someone's yard.  We went our separate ways.
"If man were never to fade away like the dews of Adashino, never to vanish like the smoke over Toribeyama, but lingered on forever in the world, how things would lose their power to move us!  The most precious thing in life is its uncertainty."
Kenkō (1283-1350), Tsurezuregusa (Chapter 7), in Donald Keene (translator), Essays in Idleness: The Tsurezuregusa of Kenkō (Columbia University Press 1967), page 7.
Keene provides this note to "Adashino": "Adashino was the name of a graveyard, apparently situated northwest of Kyoto.  The word adashi (impermanent), contained in the place name, accounted for the frequent use of Adashino in poetry as a symbol of impermanence. The dew is also often used with that meaning."  Ibid, page 8.  With respect to "Toribeyama," Keene notes: "Toribeyama is still the chief graveyard of Kyoto.  Mention of smoke suggests that bodies were cremated there."  Ibid, page 8.
An ancient Chinese burial song comes to mind:
How swiftly it dries,
The dew on the garlic-leaf,
The dew that dries so fast
To-morrow will fall again.
But he whom we carry to the grave
Will never more return.
Anonymous (translated by Arthur Waley), in Arthur Waley, One Hundred and Seventy Chinese Poems (Constable 1918), page 38.
Who knows what will come our way?  In this year, of all years, I need not remind you of that, dear readers.
The wind has brought
enough fallen leaves
To make a fire.
Ryōkan (1758-1831) (translated by John Stevens), in John Stevens, One Robe, One Bowl: The Zen Poetry of Ryōkan (Weatherhill 1977), page 67. 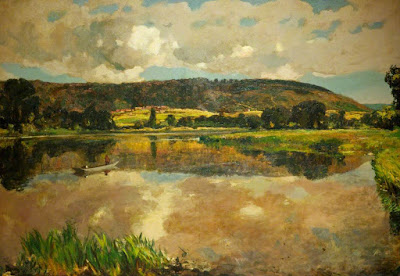 Alexander Jamieson (1873-1937)
"Halton Lake, Wendover, Buckinghamshire"
Something about the encounter with the rabbit touched my heart: there was a sudden, sighing catch of breath inside me as I watched it move across the road, pause briefly, glance at the headlights, then go on in its careful, intent way.  Why?  What had happened?  Some may say it was merely a rabbit crossing a road, an everyday occurrence. Others may say I'm a sentimental old fool.
I'm afraid I have to conclude that this is where words end.  Think of the handful of luminous moments that remain in your memory.  Your life.  You know them well.  Can you put into words why they are brilliantly clear, unchanged and unchangeable?
"Do not seek to have everything that happens happen as you wish, but wish for everything to happen as it actually does happen, and your life will be serene."
Epictetus, Encheiridion (Section 5), in Epictetus, Discourses, Books III-IV; The Encheiridion (translated by W. A. Oldfather) (Harvard University Press 1928), page 491.
Best to keep silent, wait, and pay attention.
Simply trust:
Do not also the petals flutter down,
Just like that?
Issa (1763-1828) (translated by R. H. Blyth), in R. H. Blyth, Haiku, Volume 2: Spring (Hokuseido Press 1950), page 363. 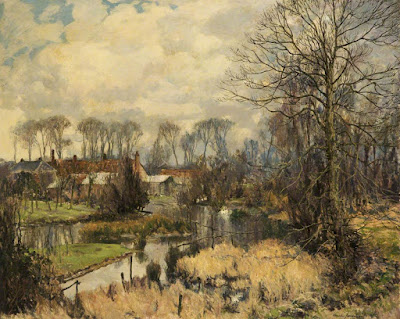 Alexander Jamieson, "The Old Mill, Weston Turville" (1927)
Just a rabbit crossing a road on a night in late autumn.  Fragile, precious, tenuous, irreplaceable, hung by a gossamer thread.  Fare thee well, dear friend.  Be safe, and live a long rabbit life.
Garramor Bay
Now the long wave unfolded falls from the West,
The sandbirds run upon twittering, twinkling feet:
Life is perilous, poised on the lip of a wave,
And the weed that lay yesterday here is clean gone.
O visitor, fugitive creature, thing of a tide,
Make music, my heart, before the long silence.
L. A. G. Strong, Northern Light (Victor Gollancz 1930). 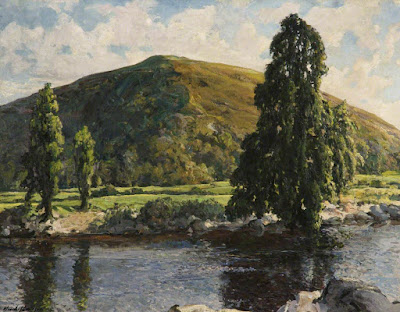 This is wonderful- thank you so much. What a beautiful and meaningful reflection. I love the quote from Kenkō Thank you for sharing your reflections and the poetry and artwork.

Shanti: You're welcome. Thank you very much for your kind words about the post. Yes, Kenkō's thoughts are something to bear in mind, aren't they? Thank you for stopping by again.

Nikki: Thank you. I'm pleased you liked the post. As ever, thank you for visiting.

Wonderful, as always. Thank you.

Your encounter with the rabbit and your recognition of the beauty and value of even its small life brought to my mind (as I'm sure it did to many others) Philip Larkin's "The Mower":

The mower stalled, twice; kneeling, I found
A hedgehog jammed up against the blades,
Killed. It had been in the long grass.

I had seen it before, and even fed it, once.
Now I had mauled its unobtrusive world
Unmendably. Burial was no help:

We should be careful of each other indeed - it's always well to be reminded of that. I remember reading, many years ago, a Pauline Kael review of the movie Bang the Drum Slowly. She disliked its (in her view) excessive sentimentality. She said something to the effect that the movie's moral seemed to be that we should be nicer to each other, which she didn't seem to think was much of a moral. I adored Kael than - and still do - but I think she was wide of the mark. Really, what other moral is there?

Here's an excerpt. The entire book is not much longer.

But a scarecrow’s life is all his own.

It takes a certain peace, hanging around a garden all day. It takes a love of silence and air. A liking for long slow thoughts. A friendliness toward birds…

He knows he isn’t real. A scarecrow understands right away that he is just borrowed parts made to look like somebody….

He has been with the owls in evening and rabbits at dawn. He has watched a spider work for hours making a web like lace. He has seen the sun tremble and the moon lie still…

His hat has housed mice and his arms have rested birds. A morning glory has held tight to his leg and a worm is living in his lapel…

There is not much else a person might want, and the scarecrow knows this.

…and soon, birds will be coming by."

I think Cynthia Rylant's book is a wonderful concomitant to your post. And I'm delighted what I find here manifests in other things I do.

"The most precious thing in life is its uncertainty."

"...wish for everything to happen as it actually does happen, and your life will be serene."

In the vernacular: "True dat!"

I'm going to get Essays in Idleness: The Tsurezuregusa of Kenkō. Idleness is my milieu.

Have a wonderful Thanksgiving. Enjoy your walks. Thanks again, JM

Mr. Parker: Thank you for sharing "The Mower": it goes well here. Although I am reluctant to pick "favorites" when it comes to poems, it is one of my favorite poems, and has appeared here before (and I have quoted the last three lines numerous times over the years). Your closing thought is perfect: "Really, what other moral is there?"

Larkin was quite affected by the incident. In my post on the poem in March of 2012, I quoted the following passage by Betty Mackereth, a colleague of Larkin's at the Brynmor Jones Library at the University of Hull: "I remember too well Philip telling me of the death of the hedgehog: it was in his office the following morning with tears streaming down his face. The resultant poem ends with a message for everyone." (The Philip Larkin Society website, May 2002.)

As for Pauline Kael and "Bang the Drum Slowly": well said. First, I am quite fond of "Bang the Drum Slowly." This no doubt makes me a sentimental old fool (although I first saw it in my youth, which means I was already a sentimental old fool). Second, as for Kael: I confess that I haven't read much by her, but what little I have read suggests that "sentimentality" would not suit a modern ironist. But perhaps I am misjudging her.

As always, thank you very much for sharing your thoughts, and for visiting.

I loved your post, your beneficent words to the rabbit, and the "handful of luminous moments" you mentioned. Virginia Woolf called them Moments of Being, and C. S. Lewis called them Joy. Garramor Bay is also a sobering reminder that I find myself in constant need of. Thank you for another magnificent post!

Mr. Maruskin: "Scarecrow" is lovely. Thank you very much for sharing it. I agree that it is a nice accompaniment to the post. "There is not much else a person might want, and the scarecrow knows this." Indeed.

Ms. Rylant's words sent me back to R. H. Blyth's Haiku, Volume 4: Autumn-Winter, in which Blyth includes 40 or so haiku about scarecrows. For instance:

The scarecrow in the distance;
It walked with me
As I walked. (Sanin)

The autumn wind
Moved the scarecrow,
And passed on. (Buson)

Yes, the words of Kenkō and Epictetus are wise, aren't they? Out of different times and different places, but of a piece.

I wish you a wonderful Thanksgiving as well. As ever, it's good to hear from you. Thank you for stopping by again.

Esther: That's very nice of you to say. Thank you.

I hadn't heard of Woolf's term "moments of being" before: thank you for sharing it. I've looked into it a bit since receiving your comment, and her thoughts are quite interesting. I intend to explore further. Seeing the phrase for the first time, I thought of Wordsworth's "spots of time." But I sense there is a difference, although they are in the same territory. Again, further exploration is required.

I agree that "Garramor Bay" is "a sobering reminder" -- but a beautiful one as well (and to be thought of in tandem with Kenkō's words). It is a poem that has stayed with me over the years. And I fully agree: it is a reminder we are "in constant need of."

As ever, it is good to hear from you. Thank you very much for visiting again.

Reading your first paragraph had a strong effect on me. Because of the pandemic, I have not been in the country in New Hampshire at all. I was suddenly transported to driving on a country road at night, & seeing a creature hurry across in front of the car, or seeing glowing eyes at the side of the road. This was a vivid, completely visual memory. I found it healing. Despite my strong regret at not being in our family place this Thanksgiving, I remember everything about last Thanksgiving, which was a particularly happy one for me.
And this year I will celebrate Thanksgiving with my "pod", down at the end of my hall -- three men & a little white dog who comes to the table.
I also wish you the best possible Thanksgiving. Susan

Susan: It is the "small things" that remain with us, isn't it? But they are not "small" at all, are they? Your recollections brought to mind, for some reason, Frost's "The Most of It," which I'm sure you know well. "He thought he kept the universe alone . . ." Not so (but with the characteristic equivocal Frost touch).

I'm sorry to hear you will not be able to go to New Hampshire this year. But I'm happy to know you will have company. As ever, thank you very much for your long-term presence here (many Thanksgivings now). I wish you a wonderful Thanksgiving. Take care.