"Far Away Is The Land Of Rest"

In my last two posts, I have spent some time (too much, no doubt) on the subject of whether the term "melancholy" appropriately describes Christina Rossetti's poetry.  Well, then, what are we to make of the poetry of Emily Bronte?  I confess that I am a stranger to the fiction of the Bronte sisters, but I am fond of Emily Bronte's poetry.  Given the literary and cinematic freight that this ill-fated family now carries with it -- empty (except for two lovers), dark, windswept moors -- "melancholy" is a word that inescapably springs to mind in connection with anything written by the trio.

Still, one comes up against the usual choice (which has been noted here on more than one occasion):  one person's "melancholia" or "pessimism" is another person's "realism" or "truth."  Consider, for instance, the following untitled poem by Emily Bronte. 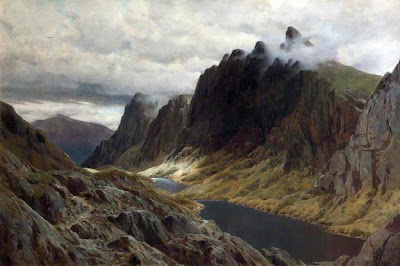 Emily Bronte, The Complete Poems (edited by Janet Gezari) (Penguin 1992).  (The poem was in manuscript form at the time of Bronte's death. This accounts for the lack of punctuation.  It was first published in 1910.) 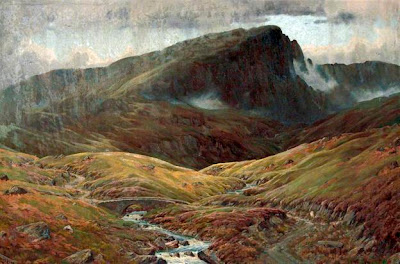 Isaac Cooke, "Showers on the Way to Goat's Water, Coniston"

Well, that may be melancholy.  Bronte wrote the poem in October of 1837. Christina Rossetti wrote the following poem in June of 1858.  She could not have known of Bronte's poem since, as noted above, it was not published until 1910.

Does the road wind up-hill all the way?
Yes, to the very end.
Will the day's journey take the whole long day?
From morn to night, my friend.

But is there for the night a resting-place?
A roof for when the slow dark hours begin.
May not the darkness hide it from my face?
You cannot miss that inn.

Shall I meet other wayfarers at night?
Those who have gone before.
Then must I knock, or call when just in sight?
They will not keep you standing at that door.

Shall I find comfort, travel-sore and weak?
Of labour you shall find the sum.
Will there be beds for me and all who seek?
Yea, beds for all who come. 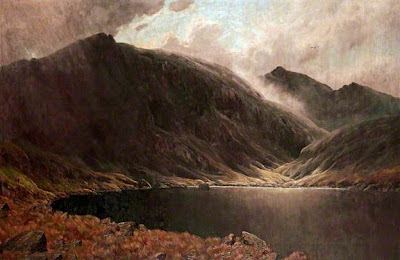 The Emily Bronte poem is a new one to me. I think the influence of the John Martin prints (epic scale - I saw them in the flesh at Sheffield Art Gallery) is echoed in her poem.

I like your comparison with the Goblin Market extract too . . .

Bovey Belle: I hadn't thought of the connection with John Martin. I'm not that familiar with his work, other than recalling that he painted panoramic Biblical and classical scenes (often with lurid colors). But I see what you mean: that sort of Romantic vision fits well with the Brontes.