Matthew Arnold's use of the word "marges" in "To Marguerite -- Continued" ("O might our marges meet again!") reminded me of a lovely poem by Ivor Gurney.  The poem shows Gurney in one of his more straightforward moods (in terms of syntax, at least).

Pebbles are beneath, but we stand softly
On them, as on sand, and watch the lacy edge
of the swift sea.

Which patterns and with glorious music the
Sands and round stones -- It talks ever
Of new patterns.

And by the cliff-edge, there, the oakwood throws
A shadow deeper to watch what new thing
Happens at the marge. 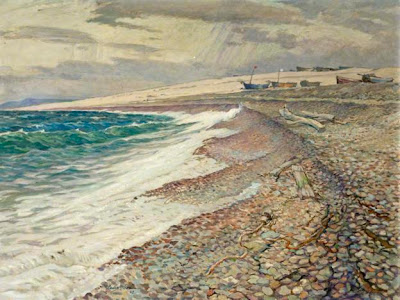 "To watch what new thing/Happens at the marge" is perhaps a good way to think of how Gurney lived his life (by choice and by sad circumstance).

I have never quite understood what Gurney means by "the oakwood throws/A shadow deeper to watch what new thing/Happens at the marge." I am likely off the mark, but I sometimes think that lines 5 and 6 of the following poem may be obliquely helpful.  There are sun-made shadows and there are moon-and-star-made shadows.  And there are other kinds of shadows as well.  Which sort Gurney means, I cannot say.  To stand in those shadows (of whatever sort) and look out over (and into) the bright world can sometimes give one a sharper view.  The world might even seem, say, pellucid.

But that is enough of that. 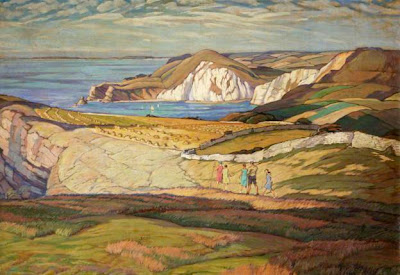 I agree about the quality of this poem. As for lines 7-8, my reading is that the cliff-edge throws a light shadow, and that within that shadow there is a deeper shadow caused by a piece of oakwood. The shadow there has doubled up. It is at this darkest point that Gurney's persona positions himself to watch 'what new thing / Happens at the marge'.

Tim: thank you very much for that reading -- it clears things up. It would be like Gurney to see the shadow within (or on top of) another shadow, and, as you say, view things from that perspective.

Are you sure that Leslie Moffat Ward should have a Phillip at the front? I have a few of his etchings and none of the signtures suggest that. Will be coming back to read more!

Haji baba: thank you for visiting. I have seen his name with and without the Philip at various times. For instance, there is a website devoted to his art titled "Leslie Moffat Ward;" the biography on the site refers to him as "Phillip [sic] Leslie Moffat Ward." Thus, I cannot say for certain.