A few years ago, I posted two translations of Rainer Maria Rilke's poem "Herbsttag" ("Autumn Day").  I have since suggested that I find Rilke's poetry to be a bit overwrought for my taste.  But I acknowledged that the fault is likely my own for not being able to match his passion.  However, when it comes to autumn, a little overwroughtness is acceptable at times.

All of which leads to another poem by Rilke, one that is perhaps less well-known than "Autumn Day."  I again offer two translations, since the different approaches of translators can be interesting. 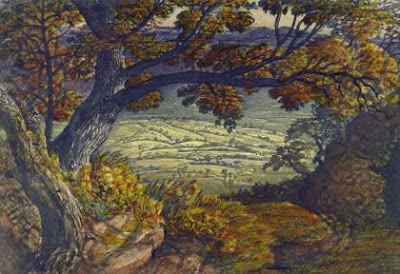 The leaves are falling, falling from far away,
as though a distant garden died above us;
they fall, fall with denial in their wave.

And through the night the hard earth falls
farther than the stars in solitude.

We all are falling.  Here, this hand falls.
And see -- there goes another.  It's in us all.

And yet there's One whose gently holding hands
let this falling fall and never land. 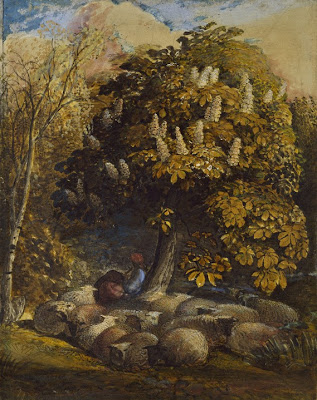 The leaves are falling, falling from trees
in dying gardens far above us; as if their slow
free-fall was the sky declining.

And tonight this heavy earth is falling away
from all the other stars, drawing into silence.

We are all falling now.  My hand, my heart,
stall and drift in darkness, see-sawing down.

And some still believe there is one who sifts and holds
the leaves, the lives, of all those softly falling.

There are certainly a great number of variations between Gass's version and Robertson's version.  This may be attributable to the fact that Robertson identifies his version as being "after Rilke."  When a translation is described as being "after [insert name of poet]" this is usually a signal from the translator to the reader that the translation is not "literal," and that some artistic license has been employed.  (I realize that the phrase "literal translation" is an oxymoron.)  In any case, I am in no position to render an opinion on either translation since I have no German.

However, at least the translators do agree on two things:  "the leaves are falling" and "we all are falling"/"we are all falling now."  I think that we can assent to both of those statements. 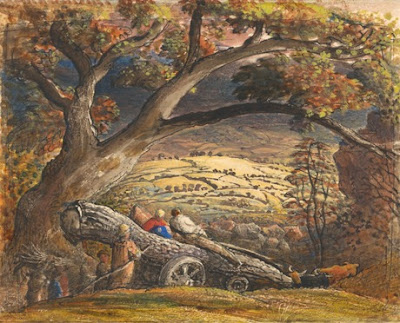 This may be my favourite Rilke poem. I really like the Robin Robertson translation, although it may be looser. Robin Robertson has said that although his version appeared before 9/11, it retrospectively acquired some associations with that day; Rilke apparently wrote the poem on September 11, 1902, and the imagery has resonance.

Thanks for the Rilke poems and the thoughtful ideas about them. When I saw the Post noted as Two Autumns, it brought to mind Shiki's haiku with that title-
For me who goes
And you who stays -
Two autumns

Happy autumn to you,
Mary

I love your choice of paintings. I wonder if you know the work of Carry Ackroyd, who has illustrated a lot of John Clare's poems?
http://www.carryakroyd.co.uk/

It's been enjoyable, I am sure, for all your faithful readers to explore the deep mysteries of autumn with you, to speculate on why the season stirs such deep thoughts and emotions in us. Most of us never tire of the subject.

Years ago when I was a junior in college I took a course titled "Modern American Poetry." One of the poets we read, one now rarely read I suppose, was Archibald McLeish. He wrote a poem about autumn. I have never forgotten one line in the poem, and though McLeish is no Keats or Rilke, his poem is worth reading.

I speak this poem now with grave and level voice
In praise of autumn, of the far-horn-winding fall.


I praise the flower-barren fields, the clouds, the tall
Unanswering branches where the wind makes sullen noise.


I praise the fall: it is the human season.
Now
No more the foreign sun does meddle at our earth,
Enforce the green and bring the fallow land to birth,
Nor winter yet weigh all with silence the pine bough,


But now in autumn with the black and outcast crows
Share we the spacious world: the whispering year is gone:
There is more room to live now: the once secret dawn
Comes late by daylight and the dark unguarded goes.


Between the mutinous brave burning of the leaves
And winter’s covering of our hearts with his deep snow
We are alone: there are no evening birds: we know
The naked moon: the tame stars circle at our eaves.


It is the human season. On this sterile air
Do words outcarry breath: the sound goes on and on.
I hear a dead man’s cry from autumn long since gone.


I cry to you beyond upon this bitter air.

The line that has stuck with me for scores of years is, "I praise the fall: it is the human season."

Autumn must indeed be the human season, for your postings on autumn and the comments on them confirm our persistent interest in the season. Why does autumn settle so deeply into our hearts? Why do our imagination yearn to know not so much was autumn is but rather what does it mean?

I was wondering too, in connection with fall being a culmination of some kind, a moment of ripeness and fecundity, of richness and fullness, that moment of a breath held in suspension, that serene moment of acceptance before the fall away into the inevitable shadow, the process done now, beauty and life fulfilling the fate of all ephemeral things, including us.

I have often wondered whether Edgar's comment to his father, Gloucester, in "King Lear" does not cut to the quick of the matter, sum up, perhaps, what you and I and other have been circling around for some time now. When Gloucester, blind and ruined, tells his son that he, Gloucester, who has given up, is prepared to sit where he is and rot,Edgar replies ;

What, in ill thoughts again? Men must endure
Their going hence, even as their comng hither:
Ripeness is all . . .

The words are too precious and perfect for me to attempt any kind of vulgar paraphrase. I couldn't do it if I tried. Besides, if one needs a paraphrase to understand what Edgar is saying, one will never understand.

Again, thanks for the superb postings, and thanks to your corps of dedicated readers for their insightful comments.

I was aware of the date of composition of the poem: Gass mentions it in his book. He also notes that "Herbsttag" was written in September 1902. That was a productive month!

As ever, thanks for your thoughts.

littlemancat: thank you very much for visiting, and for the lovely poem by Shiki. I hadn't seen it before: it is very nice, and I appreciate your sharing it.

Happy autumn to you as well.

Judi: thank you very much for stopping by. I wasn't aware of Ms Akroyd's work -- I visited her website, and her work is lovely. As you might expect, it is the sort of thing that I like. I'm also delighted that she has illustrated Clare's poems -- I see that she has done two books relating to his work. I will have to track them down.

Thank you again for visiting, and for the recommendation.

What thought provoking comments you have received. It seems fall makes us realize the glory of life, its ripeness. And then there is Samuel Palmer, what a perfect choice for the verse.

Mr. Floyd: as always, thank you for the thoughts. And thank you as well for the MacLeish poem (which I wasn't aware of) and the apt reference to the scene from Lear. I think that your comments on autumn are right on the mark.

Julie: thanks for dropping by. Yes, autumn is a thought- and emotion-provoking time of year for many of us, isn't it? I'm glad that you like the works by Palmer: many of his works capture the essence of autumn (and/or evening twilight), don't they?

I like this poem, Stephen, but I do see what you mean about his work being "overwrought," in the most literal sense, perhaps. The overhead garden is sort of hard to take -- a sort of unwelcome stretch. Feels like something I would have worked hard to find a better of saying.

Chris: good point. The overhead garden reflects Rilke's tendency to take things to a cosmic level at the drop of a hat (to mangle a metaphor). Here's a pop culture way of saying it: like Nigel Tufnel, he seems to turn the volume up to 11 quite a bit.

But, still, he has his moments. What's more, I shouldn't pontificate on these matters.

As always, I appreciate hearing from you. Thanks for stopping by.

I am reminded of a line from Alcuin's poem 'Farewell To His Cell' (I don't know who translated it): 'Wretched that we are, why do we love thee O world, as thou fleest from us? Thou fleest from us, falling all the time and on every side. Keep on fleeing if thou wishest...'
(I have only today discovered your blog and am much enjoying what I see.)

Archy Carroll: I am delighted that you found your way here, and I hope that you will return. Thank you very much for your kind words.

And thank you as well for the lines from Alcuin, which I had not seen before. Lovely and apt.