In the past, I have written of the bitter-sweetness of autumn.  October -- the heart of autumn -- is, I think, the most bitter-sweet month of all.

September, on the other hand, is wistful.  Summer persists, but there is a sense of something in the offing.  In this part of the world, the weather this week will be lovely -- bright blue and in the upper-70s.  For us, this is midsummer weather.  But the lengthening shadows and the shorter days hint of something else.

A line from Wallace Stevens's "The Plain Sense of Things" comes to mind: "A fantastic effort has failed . . ." 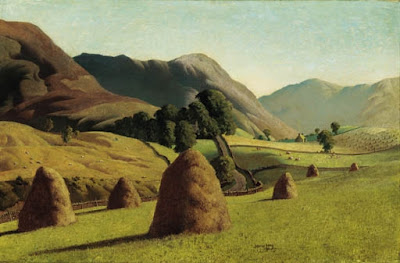 The band packs in, the banners drop,
The ice-cream stiffens in its cone.
The boatman lifts his megaphone:
'Come in, fifteen, your time is up.' 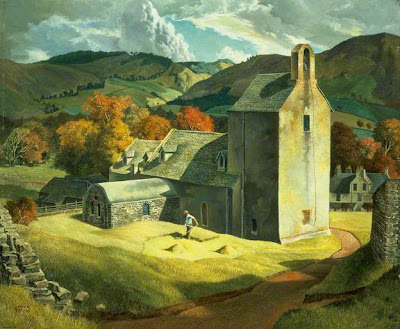 That hints without assuming --
An Innuendo sear
That makes the Heart put up its Fun
And turn Philosopher. (#1271)

The above, one of Emily Dickinson's best poems describes September's baccalaureate, a gentle and civil sermon, serene but melancholy, words that intimate what is to follow her departure: "An innuendo sear / That makes the heart put up its fun / And turn Philosopher."

Because, by her own words, "I see New Englandly," she feels more intensely the turn of the seasons than do those in other parts of the country. One doesn't forget a New England winter,and what New Englander doesn't hear ominous sounds in the "dissembling breeze" of late September night, an icy prophecy, even as the crickets sing and the raucous crows make make to "rooky woods."

"...I sit on a stone after lunch and consider the glow
Of the sun through mist..."

This poem is on the wall above my desk and although the phrase that I have selected here sounds wistful the poem never fails to evoke for me absence and times past in a very powerful way.

Thank you for linking to the Wallace Stevens poem - I was not familiar with it but as always with WS am delighted with some of the phrases which prick the mind like needles.

Mr. Floyd: thank you very much for the Dickinson poem -- I hadn't seen it before. I like "a dissembling Breeze very much"! And the mention of crickets as well: I have been noticing them on my afternoon walks recently.

As ever, thank you for stopping by again.

alice c: thank you for the reminder about "Achill" -- it has been a while since I've read it, and you have prompted me to give it a visit.

I'm glad that you liked "The Plain Sense of Things" -- Stevens is very good on autumn. "Phrases which prick the mind like needles" is a fine way of describing what he is able to do.

Thanks again -- it is always nice to hear from you.