How To Live, Part Twenty: "The Foggy Lane"

There is something to be said for winnowing, for paring down.  The culture around us encourages short attention spans and hyperactive grasping after chimeras.  Don't get me wrong:  I am in no position to judge.  I don't have the strength of character to be an anchorite.  I am easily seduced by chimeras.  "Garlic and sapphires in the mud/Clot the bedded axle-tree." "Jewels and binoculars hang from the head of the mule."  Or something like that.

But you have to start somewhere.  Thus -- speaking of mud -- it is always a good idea to keep an eye to the ground.  For instance, this week I saw quite a few crocuses (white, yellow, pale purple, deep purple), as well as the first daffodils. 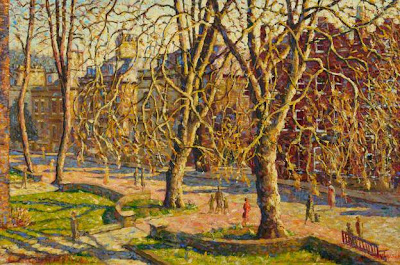 The houses seem to be floating
in the fog, like lights at sea.

Last summer I came here with a man
who spoke of the ancient Scottish poets --
how they would lie blindfolded,
with a stone placed on the belly,
and so compose their panegyrics . . .
while we, being comfortable, find nothing to praise.

Then I came here with a radical
who said that everything is corrupt;
he wanted to live in a pure world.

And a man from an insurance company
who said that I needed "more protection."

Walking in the foggy lane
I try to keep my attention fixed
on the uneven, muddy surface . . .
the pools made by the rain,
and wheel ruts, and wet leaves,
and the rustling of small animals.

What Simpson says is nothing more nor less than what the Chinese T'ang Dynasty poets and the Japanese haiku poets have been saying for centuries:  pay attention.   Pay loving attention.

The spring day closes,
Lingering
Where there is water. 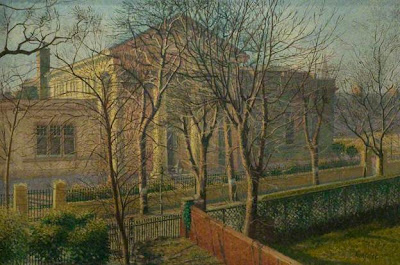 Mr Pentz, the Louis Simpson poem is another discovery for me, and a delight. Than you once again.
I am lucky enough to have a small area of woodland and open fields fairly close to where I live on the outskirts of London and have walked there regularly for many years. Although it has become a familiar and much loved place, I am always astonished by what there is to see, if you take time, slow down, learn to be patient and pay attention. It is sometimes hard to escape the mad rush and busyness of modern living, but if you take that time, the rewards of seeing those things we so often fail to notice, are immense.

Mr Ashton: thank you very much for visiting again, and for your thoughts.

I'm pleased that you like the Simpson poem. I suspect that his work may not be very well known over there.

I understand exactly what you mean about appreciating small areas of woodland and fields. In recent years, I have been doing what you described: regularly visiting a nearby area that I had previously visited only occasionally. As you say, I have noticed things that escaped me before. And, what's more, something always seems to appear that I was not expecting.

As always, it's good to hear from you.

Pardon if this is a "FAQ," but where does your knowledge of art come from? I find the aesthetic of your blog enchanting, but am unfamiliar with most of the artwork posted, and so somewhat awed by the range of works you post here.

(They say that as you get older, the problem is that everything reminds you of something else.)

> "The culture around us encourages short attention spans and hyperactive grasping after chimeras. ... I am easily seduced by chimeras."

"The young mortal enters the hall of the firmament: there is he alone with [the gods] alone, they pouring on him benedictions and gifts, and beckoning him up to their thrones. On the instant, and incessantly, fall snow–storms of illusions. He fancies himself in a vast crowd which sways this way and that, and whose movement and doings he must obey: he fancies himself poor, orphaned, insignificant. The mad crowd drives hither and thither, now furiously commanding this thing to be done, now that. What is he that he should resist their will, and think or act for himself? Every moment, new changes, and new showers of deceptions, to baffle and distract him. And when, by and by, for an instant, the air clears, and the cloud lifts a little, there are the gods still sitting around him on their thrones, — they alone with him alone."

Anonymous: thank you very much for visiting, and for the kind words about the blog, which I greatly appreciate.

I'm afraid that I cannot claim to have any "knowledge" of art! As you may have concluded, I am particularly fond of 20th century art (non-abstract, usually) from the UK. After becoming aware of some of the well-known artists of that time (e.g., Stanley Spencer, Paul Nash, John Nash, John Aldridge), one thing led to another. I used to depend upon the websites of individual museums and galleries to find images, but now nearly all oil paintings on public display in the UK can be found on the "BBC Your Paintings" website, which is remarkable.

Thank you again. I hope that you will return.

Bob: thank you very much for stopping by, and for that fine passage from Emerson. It is new to me (which is not surprising: I confess that my ignorance of Emerson is nearly total). It does fit perfectly with what I was trying to get at. (But says it much better, of course.)