"Spring, Of All Seasons Most Gratuitous"

One might expect a poem about spring by Philip Larkin to perhaps be a bit mordant.  Perhaps.  After all, one of Larkin's favorite quips about himself was:  "Deprivation is for me what daffodils were for Wordsworth." Interview with The Observer (1979), in Philip Larkin, Required Writing: Miscellaneous Pieces 1955-1982 (Faber and Faber 1982), page 47. However, bear in mind (as I have noted before) that Larkin was wont to play up his alleged dourness for literary critics and journalists in order to throw them off track.

But we who love Larkin's poetry find his mordancy cheering.  (Of course, this may be due to the fact that we are ourselves mordant.)  Unless he is writing about hospitals or nursing homes or ambulances, I usually finish any poem of his with a smile on my face.  This is either because (1) the poem is lovely, or (2) it tells a marvelous truth about how we live.  Actually, in most cases, both (1) and (2) are true of any poem written by Larkin. 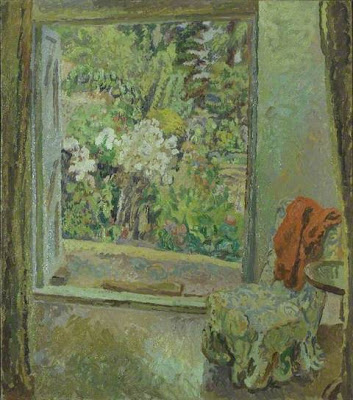 Green-shadowed people sit, or walk in rings,
Their children finger the awakened grass,
Calmly a cloud stands, calmly a bird sings,
And, flashing like a dangled looking-glass,
Sun lights the balls that bounce, the dogs that bark,
The branch-arrested mist of leaf, and me,
Threading my pursed-up way across the park,
An indigestible sterility.

Spring, of all seasons most gratuitous,
Is fold of untaught flower, is race of water,
Is earth's most multiple, excited daughter;

And those she has least use for see her best,
Their paths grown craven and circuitous,
Their visions mountain-clear, their needs immodest.

Larkin wrote his sonnet in May of 1950:  a happy-go-lucky (but "pursed-up") youth of 27.  How can you not love someone who describes himself as "an indigestible sterility"?  (A nice line of pentameter, that.) 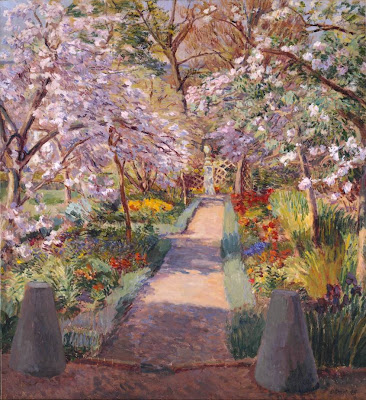 What a well-wrought, lovely poem - it's rare for poems to mix so effectively the essential and the personal. It's like he's saying to Elliott: "you think you're dreary!" I get what you mean by deprivation - that is where the beauty resides in this poem. It also has the best water daughter rhyme I've ever seen. Ciao.

Mr. Sigler: thank you very much for your thoughts on the poem. As for deprivation: I think that Larkin was very good both at conveying it and at humanizing it, and suggesting that there is still fullness to be found (momentarily, at least).

I appreciate hearing from you again.

Many thanks for this beautiful poem. I love Larkin, and my favourite poem of his is "High Windows". In the UK, he is becoming respectable again after a period of posthumous disgrace resulting from the publication of some racist letters to Kingsley Amis.

Alas, the most obvious "indigestible sterility" here in the UK is the continuing wintry weather. This blog is my sole link to Spring...

Sam Vega: It is one of his lesser known poems, and I hadn't thought of it in a while. Despite your weather now, I'm certain the parks will soon be as described by Larkin.

As for the kerfuffle about Larkin and Amis: the less said the better. It was a politically-correct "moronic inferno". (To borrow a phrase from a book by Amis's son, who acknowledged borrowing it from Saul Bellow, who in turn borrowed it from Wyndham Lewis.)