Perspective, Part Eleven: "His Heart Is Tranquil, From It Springs A Dreamy Watchfulness Of Tranquil Things"

Perhaps I am deluding myself -- or whistling past the graveyard -- but I believe that, apart from aching joints, growing old has its compensations. For instance, humanity's fixations and follies (my own included) can be viewed from a somewhat-Olympian distance.

Mind you, I don't claim to be of a calm, disinterested, and equable temperament:  I am often moved to sorrow or dismay or anger at the latest display of humanity's diabolical capabilities and inanity.  Our perverse inventiveness is, alas, endless.  But the existence of those diabolical capabilities and of that inanity no longer comes as a surprise.  Thus it is, thus it was, and thus it always will be.

There's no great mystery here, is there?  One is best advised to attend to one's own soul.  A place to start: 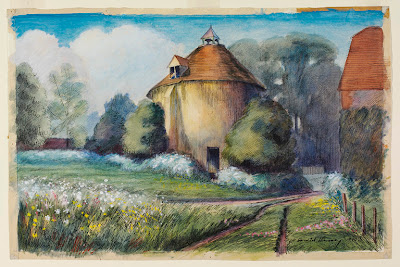 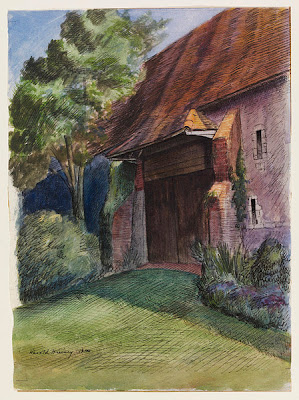 The following passage is apt, I think.

"One of the advantages of old age is liberty.  Pisistratus asked Solon, who opposed him, on what he grounded his liberty?  Upon my old-age, he replied, which has no longer any thing to fear.

The latter season sets us free from the tyranny of opinion.  When we are young, we think only of living in the conceit of others.  We must establish our reputations, and give ourselves an honorable place in the imagination of others; and we must even be happy in their idea.  Such happiness is not real; -- it is not ourselves we consult, but others.

In a later period, we return to ourselves, and this return has its sweets.  We begin to consult and to confide in ourselves.  We escape from fortune and from illusion.  Men have lost their prerogative of deceiving us.  We have learnt to know them, and to know ourselves; to profit from our own faults, which instruct us as much as those of others.  We begin to see our error, in having set so high a value upon men."

Marchioness de Lambert (Anne-Therese de Marguenat de Courcelles), Essays on Friendship and Old-Age (translated by Eliza Ball Hayley) (1780), pages 128-130.  I owe my awareness of this passage to Giacomo Leopardi, who quotes from it in Zibaldone (page 633; February 9, 1821). 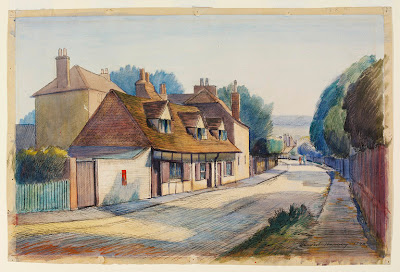 But I wouldn't wish to suggest that this growing old business is always a bed of roses.  A poem by Norman MacCaig provides a fitting counterpoint and caution.

In an Edinburgh Pub

An old fellow, hunched over a half pint
I hope he's remembering.
I hope he's not thinking.

Memory, as always,
Lazarus of the past --

who comes sad or joyful,
but always carrying with him
a whiff of grave clothes. 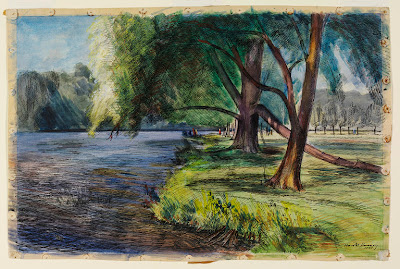 "a whiff of grave clothes"

Could that "whiff" be a symbol of the fears of the observer and does not emanate from the old man?

A great line, regardless.

Perhaps old age does have its compensations. I found your words comforting and, as always, eloquent and thoughtful.

I am ambivalent about old age. Some might say that old age is a hard go, too hard to be sanguine about, something, maybe, one courageously reconciles oneself to. Frankly, I don't know. Old men learn to fear an insistent certitude.

The Larkin who says we should be kind to one another while there is time seems to think that "the time" ends before life. See, for instance, his poems "Heads in the Women's Ward" and "The Old Fools."

At the noisy end of the café, head bent
over the table, an old man sits alone,
a newspaper in front of him.

And in the miserable banality of old age
he thinks how little he enjoyed the years
when he had strength, eloquence, and looks.

He knows he’s aged a lot: he sees it, feels it.
Yet it seems he was young just yesterday.
So brief an interval, so very brief.

And he thinks of Prudence, how it fooled him,
how he always believed—what madness—
that cheat who said: “Tomorrow. You have plenty of time.”

He remembers impulses bridled, the joy
he sacrificed. Every chance he lost
now mocks his senseless caution.

But so much thinking, so much remembering
makes the old man dizzy. He falls asleep,
his head resting on the café table.

Fred: it's funny that you raise that point: I've often thought that the "old fellow" described by MacCaig is MacCaig himself -- he was 78 when he wrote the poem, lived in Edinburgh, and was a frequenter of pubs. But whether my fancy is correct or not, I agree with your thought. I also agree that it is a great line.

As always, it is a pleasure to hear from you. Thank you for stopping by.

Anonymous: thank you very much for the kind words. I understand what you mean about ambivalence. How one looks at it depends on the day.

You're linking of Larkin and Cavafy is perfect: I think that both of them were absolutely terrified of old age and death. I agree about "Heads in the Women's Ward" and "The Old Fools," and (as you know) one could also add "The Building" and "Ambulances" to the list. I've always liked "An Old Man," despite how frightening it can be (again, depending on the day). I'm sure you are familiar with this by him as well:

The Souls of Old Men

Inside their worn, tattered bodies
sit the souls of old men.
How unhappy the poor things are
and how bored by the pathetic life they live.
How they tremble for fear of losing that life, and how much
they love it, those befuddled and contradictory souls,
sitting -- half comic and half tragic --
inside their old, threadbare skins.

Thank you very much for your thoughts, and for visiting.