I do not accept the common caricature of Thomas Hardy as a "pessimist." Poets who report things as they see them are often pigeon-holed as "pessimists" by those who have not taken the time to actually read the poetry.  Philip Larkin is often caricatured (wrongly) in the same fashion. As it turns out, few poets have written about the human condition and individual human beings with as much wisdom, sensitivity, empathy, and compassion as have Hardy and Larkin, the purported "pessimists."

Beyond this, there is an interesting cosmological thread that runs through Hardy's poetry.  It is true that he viewed the Cosmos (or Existence or the Universe) as something that is, at best, indifferent to our fate.  Hence, we find him referring to "Crass Casualty," "purblind Doomsters," and the like. There is no denying that he possessed a tragic sense of life.

But there is another side of Hardy that can be described as serene, and accepting, in the face of this state of affairs.  This serenity and acceptance arise from a sense of -- I am wary of using these words -- oneness and continuity, of timelessness in the midst of unceasing change.  This was not the product of any theological principles.  Hardy did not go in for those.

But I should stop, and let the poems speak for themselves.

I
Here's the mould of a musical bird long passed from light,
Which over the earth before man came was winging;
There's a contralto voice I heard last night,
That lodges in me still with its sweet singing.

II
Such a dream is Time that the coo of this ancient bird
Has perished not, but is blent, or will be blending
Mid visionless wilds of space with the voice that I heard,
In the full-fugued song of the universe unending.

The bird of the poem is a fossil of archaeopteryx, which Hardy saw in the Albert Memorial Museum in Exeter in 1915.  J. O. Bailey, The Poetry of Thomas Hardy: A Handbook and Commentary (University of North Carolina Press 1970), page 345.

Call me dreamy, addle-pated, and/or old-fashioned, but I love a poet who writes without irony of the "visionless wilds of space" and "the full-fugued song of the universe unending." 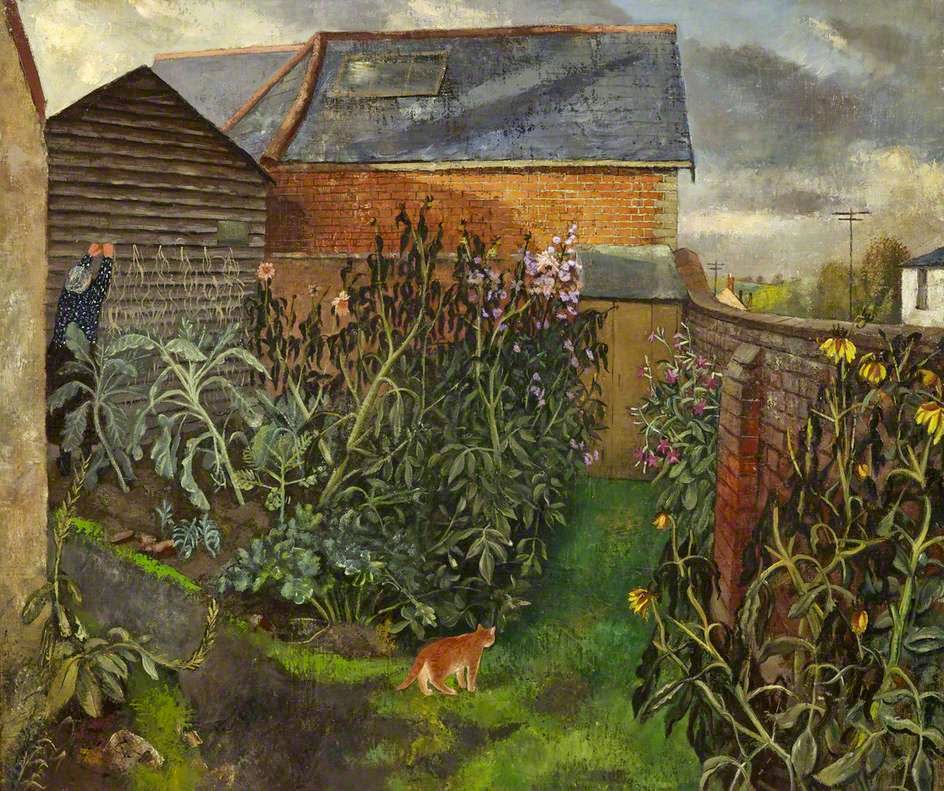 Later in the same volume -- which was published in Hardy's 77th year -- we find this:

When the cloud shut down on the morning shine,
And darkened the sun,
I said, "So ended that joy of mine
Years back begun."

But day continued its lustrous roll
In upper air;
And did my late irradiate soul
Live on somewhere?

The OED defines "irradiate" as: "illumined; made bright or brilliant." 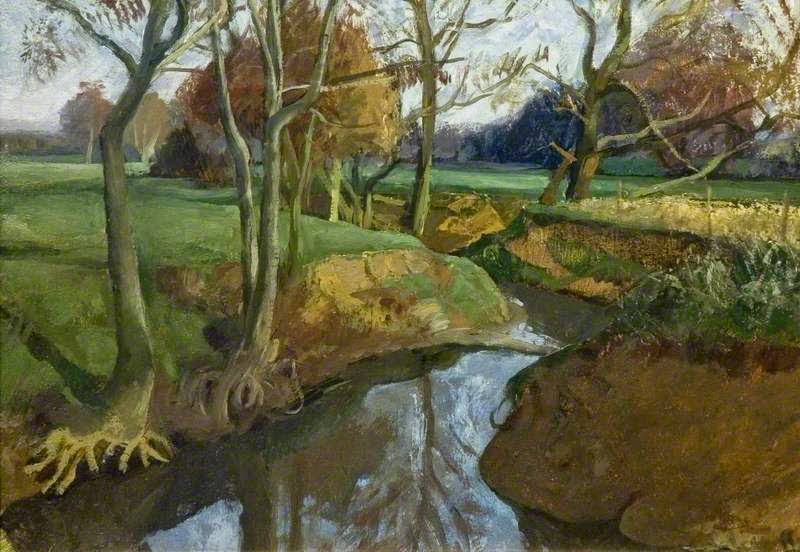 As I have noted on previous occasions, Hardy is at home in graveyards.  In Hardy's poetry, casual conversations with ghosts are a common occurrence, and are no cause for alarm.  It thus makes perfect sense that those who have departed are likely to find their way back into our World via other avenues.  Nothing ever vanishes.  A comforting thought, I think.  One that cannot be proven, of course.  But that is of no moment.

Portion of this yew
Is a man my grandsire knew,
Bosomed here at its foot:
This branch may be his wife,
A ruddy human life
Now turned to a green shoot.

These grasses must be made
Of her who often prayed,
Last century, for repose;
And the fair girl long ago
Whom I often tried to know
May be entering this rose.

So, they are not underground,
But as nerves and veins abound
In the growths of upper air,
And they feel the sun and rain,
And the energy again
That made them what they were! 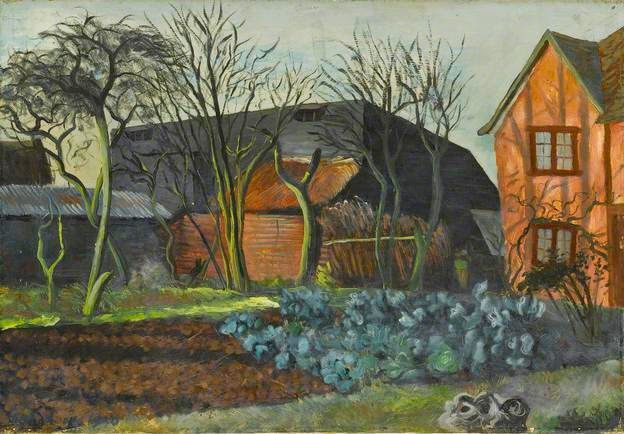 All of this is reminiscent of a poem that has appeared here before, a poem that was written on the other side of the world eleven centuries or so before Hardy wrote these three poems.

Mounting on high I begin to realize the smallness of Man's Domain;
Gazing into distance I begin to know the vanity of the Carnal World.
I turn my head and hurry home -- back to the Court and Market,
A single grain of rice falling -- into the Great Barn.

That's it, isn't it?  "A single grain of rice falling -- into the Great Barn." More than enough for one life. 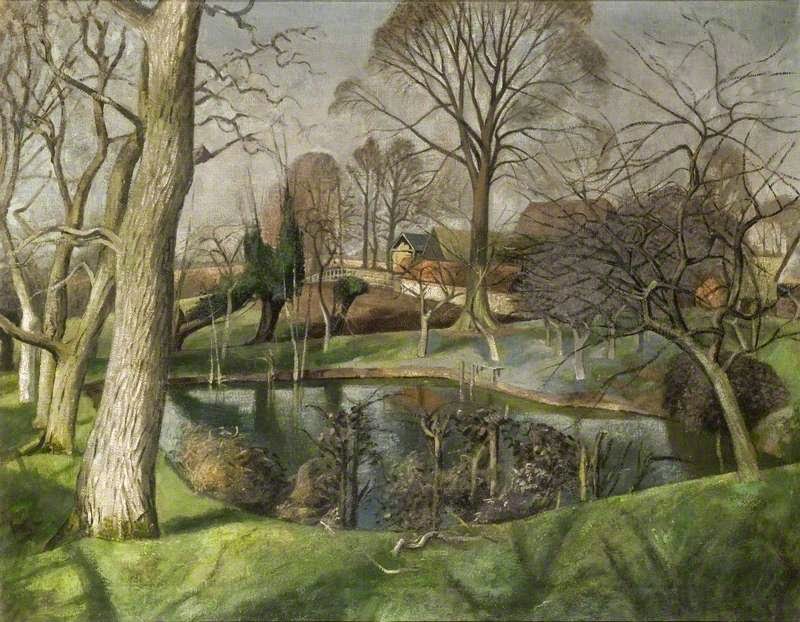 Whilst I am waiting for my Ivor Gurney book to arrive (!), I must revisit one of my Hardy biographies. I always felt that there was a catalyst for his loss of faith, and perhaps it was the tragic death of his friend and mentor Horace Moule. Claire Tomalin writes that "Hardy never forgot how cruelly Horace was destroyed by forces outside his own control." It would certainly have contributed towards his fatalistic viewpoint.

I have read The Occulation over and over now and am interested in his thoughts on an emotion captured in time. I wonder whose death he might have been mourning? Emma's perhaps.

I would like to think that the Yew tree he had in mind was one of those in Stinsford churchyard, which he knew so well and where his heart was finally laid to rest.

P.S. Or perhaps he was thinking of the death of his first love, Tryphena Sparks?

I don't know that the below poem by Hardy ("On An Invitation To The United States") manifests any cosmic acceptance by Hardy (this comment is probably not germane to your superb posting) but the poem does possess a serenity and dignified stoicism about it. The poem does not reveal Hardy in despair.

His duty, as he sees it, is to limn the lives of those who lived within the limited purview of his study window. He writes of an ancient land, serenely and patiently, tracing the lives of those who once labored under the bewildering constraints of the human predicament. He "enshrines" these lives, and in the process finds their experiences "count" as his, experiences, indeed, that count as ours.

Hardy understands the essential tragic nature of life, but he is never dour or strident in his revelations. He looks with equanimity at the indifferent world; he looks, one thinks, with contentment.

In short, I think the below poem tells us that Hardy would have had his life no other way. He reminds me of Yeats's Chinamen in "Lapis Lazul":

On all the tragic scene they stare/.../ Their eyes mid many wrinkles, their eyes /Their ancient, glittering eyes, are gay"


My ardours for emprize nigh lost
Since Life has bared its bones to me,
I shrink to seek a modern coast
Whose riper times have yet to be;
Where the new regions claim them free
From that long drip of human tears
Which peoples old in tragedy
Have left upon the centuried years.

For, wonning in these ancient lands,
Enchased and lettered as a tomb,
And scored with prints of perished hands,
And chronicled with dates of doom,
Though my own Being bear no bloom
I trace the lives such scenes enshrine,
Give past exemplars present room,
And their experience count as mine.

Bovey Belle: When I come across a poem such as "The Occultation," I tend to think he is writing of Emma. But I agree with you that Tryphena Sparks and Horace Moule are usually the other candidates when it comes to poems such as this.

Coincidentally, just yesterday I was reading "Before My Friend Arrived," which you are probably familiar with. It depicts Hardy sketching "the white chalk mound" of dug-out earth beside the grave in which Moule was to be buried on the following day. It appears in Human Shows, Far Phantasies, Songs, and Trifles, which was published in 1925 -- 52 years after Moule's suicide in 1873. As you suggest, his death was something that Hardy may have never gotten over.

As always, it's good to hear your thoughts. Thank you for stopping by again.

Anonymous: Thank you very much for "On an Invitation to the United States." I agree that it does cast light on what Hardy felt he was doing in his poetry, and, that he was not, as you say, "dour or strident in his revelations." The quote from "Lapis Lazuli" is perfect.

Your citing this poem also reminds me of such poems by Hardy as "He Never Expected Much," "Nothing Matters Much," "A Private Man on Public Men," and "For Life I Had Never Cared Greatly" in which he professes his tempered expectations about life. But, to me at least, these professions ring a bit hollow given his clear compassion for his fellow human beings.

Again, thank you for sharing this.

In your response to Anonymous you aptly wrote:

"But, to me at least, these professions ring a bit hollow given his clear compassion for his fellow human beings."

I wonder how many readers of Hardy miss "his clear compassion"?

Here's what Robert Mezey says in his introduction to his "Selected Poems of Thomas Hardy":

"He was one of those men who never get over the discovery of how much pain there is in the world, not merely their own pain but that of other creatures which they feel as keenly as their own; he remained all his life at the mercy of what James Wright called his 'defenseless compassion.'"

Older now I discover more compassion in the poetry of Hardy and Larkin that I do in the words of Whitman or, sometimes, the performance of Yeats. Whitman I find blusters and Yeats shows off; Hardy. in some ways like Frost, quietly tells us the truth. He tells a hard truth, things we would rather not hear, but Hardy's tone persuades us to listen, and if his words score our mortal hearts they also urge us to live with dignity and courage--to live with compassion.

Anonymous: Thank you very much for your thoughts, and those of Mr. Mezey, on Hardy's compassion: you have articulated this aspect of his character and poetry much better than I can.

My experience has been similar to yours. Over the years I have come to value Hardy's poetry more and more because of its humanity. I think the pairing with Larkin is a good one. As I'm sure you know, Larkin spoke of the turning point in his writing of poetry coming when he began to read Hardy's poetry in depth, after being enthralled with Yeats. It was Hardy's humanity that struck Larkin, in contrast with Yeats', as you say, "performance" (a perfect description of a great deal of Yeats). I enjoy and admire Yeats' poetry. But it cannot be compared with Hardy's when it comes to the human element.

Thank you again for these insights.