I have been in a vague 1920s mood this week, and thus found myself perusing Georgian Poetry, 1920-1922, the final installment of Edward Marsh's five-volume series that began in December of 1912.  There is something homely (in the sense of "simple, plain, unsophisticated") and comforting about these volumes, with their paper-covered boards, gilt-lettering, and now age-toned pages.

I realize that I am constructing a dream-world:  how can I possibly say that I have been in "a vague 1920s mood this week" when I have no conception of what the 1920s were like in England, across the sea?  But escapism is what it is.  I confess:  at times I long for a different world entirely.

Yes, I know that human nature was no different then, that a horrific war had just ended, and that economic calamity and another war were on the horizon.  Yet there is something fundamentally decent, restrained, circumspect, and seemly about the poems one encounters in Marsh's anthologies.  Something that is the exact opposite of the world in which we now find ourselves. 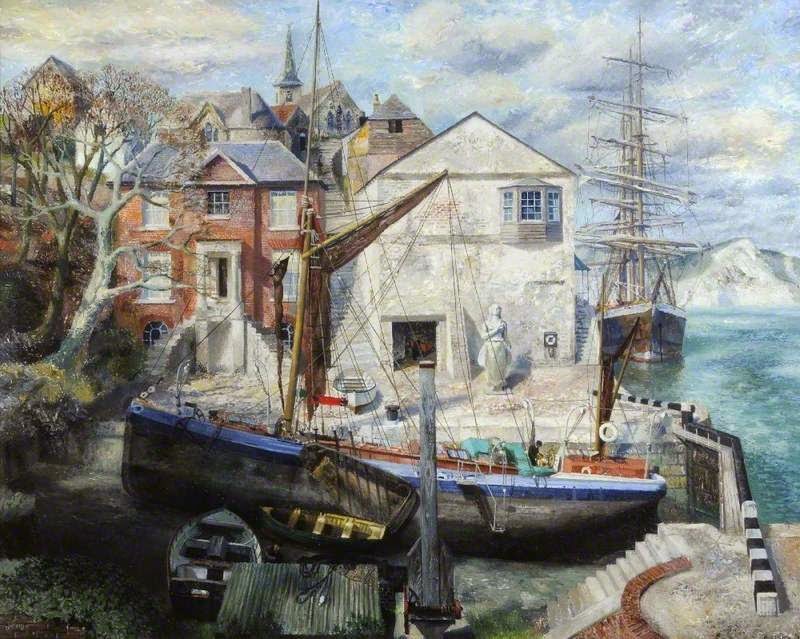 Earlier this year I posted poems by William Kerr and J. D. C. Pellow that appeared in Georgian Poetry, 1920-1922.  A few days ago, I discovered this poem in the same volume.

When little lights in little ports come out,
Quivering down through water with the stars,
And all the fishing fleet of slender spars
Range at their moorings, veer with tide about;

When race of wind is stilled and sails are furled,
And underneath our single riding-light
The curve of black-ribbed deck gleams palely white,
And slumbrous waters pool a slumbrous world;

-- Then, and then only, have I thought how sweet
Old age might sink upon a windy youth,
Quiet beneath the riding-light of truth,
Weathered through storms, and gracious in retreat.

The image of the lights of the village "quivering down through water with the stars" is particularly fine.  As is "slumbrous waters pool a slumbrous world."  And, at my age, I find the concluding lines something to aspire to. (Although I have no illusions about "the riding-light of truth" beaming overhead!  But, as for "gracious in retreat":  one would hope so.) 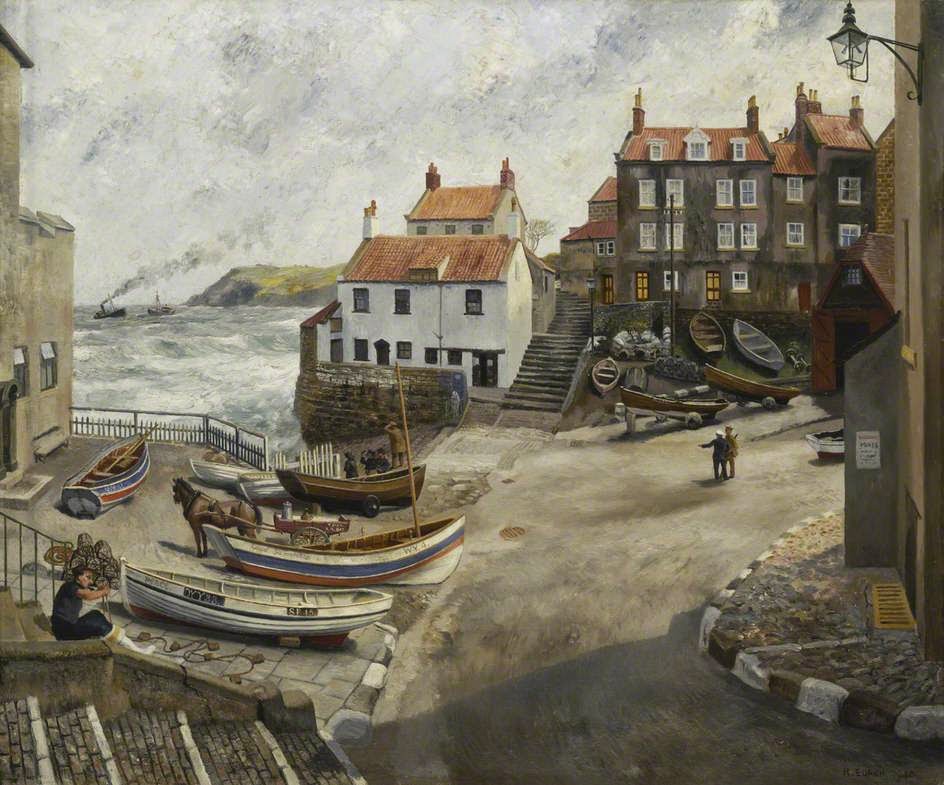 I have a soft spot for poems set in peaceful harbors at night.  Hence, "Evening" brought this poem to mind (which, coincidentally, was also published in 1921).

How lovely is the sound of oars at night
And unknown voices, borne through windless air,
From shadowy vessels floating out of sight
Beyond the harbour lantern's broken glare
To those piled rocks that make on the dark wave
Only a darker stain.  The splashing oars
Slide softly on as in an echoing cave
And with the whisper of the unseen shores
Mingle their music, till the bell of night
Murmurs reverberations low and deep
That droop towards the land in swooning flight
Like whispers from the lazy lips of sleep.
The oars grow faint.  Below the cloud-dim hill
The shadows fade and now the bay is still.

Think of it:  T. S. Eliot's The Waste Land would be published in the following year.  I was once entranced by it, and I still find it . . . interesting. But it now seems overwrought.  And Eliot seems full of himself.  When it comes to "modernism," I suppose I am an apostate.  "Evening" and "Boats at Night" seem more, well, human.  These sorts of poems may not be ironic enough, or unillusioned enough, for some "modern" tastes.  They certainly do not pass muster for the avant-garde.  They are unashamedly "old-fashioned."  All the better. 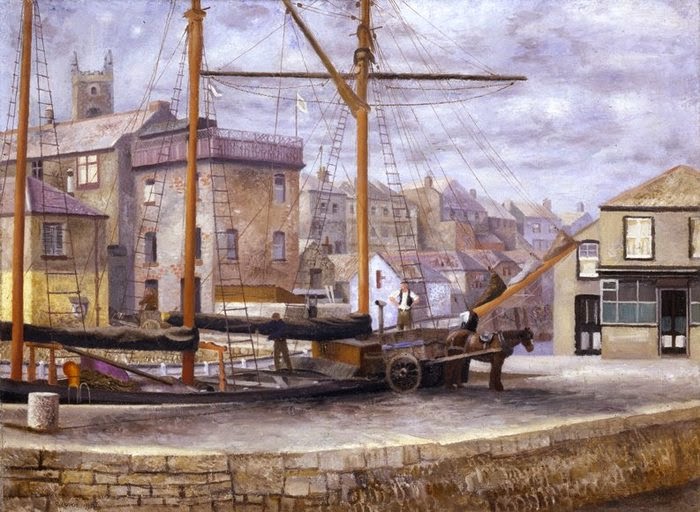 Finally, a poem which (for me, at least) has the same evocative feeling as the poems by Sackville-West and Shanks.

A Ship, an Isle, a Sickle Moon

A ship, an isle, a sickle moon --
With few but with how splendid stars
The mirrors of the sea are strewn
Between their silver bars!
*     *     *
An isle beside an isle she lay,
The pale ship anchored in the bay,
While in the young moon's port of gold
A star-ship -- as the mirrors told --
Put forth its great and lonely light
To the unreflecting Ocean, Night.
And still, a ship upon her seas,
The isle and the island cypresses
Went sailing on without the gale:
And still there moved the moon so pale,
A crescent ship without a sail!

Flecker was of a romantic bent, which was further colored by the time he spent in the Mediterranean and the Middle East as a consular official.  In tone and diction, his poetry often has a Romantic-Victorian feel to it. However, in a number of poems he adopted a more direct, less florid approach, while still retaining his distinctive sensibility.  (In this regard, I recommend a perceptive essay (unfinished) that he wrote about A. E. Housman.  Flecker remarks of A Shropshire Lad:  "[T]here are no cacophonous lines.  Mr. Housman has achieved this fine result mainly because he has used pure spoken English with hardly any admixture of poetic verbiage."  James Elroy Flecker, Collected Prose (1920), page 226.) It is a pity he died so young. 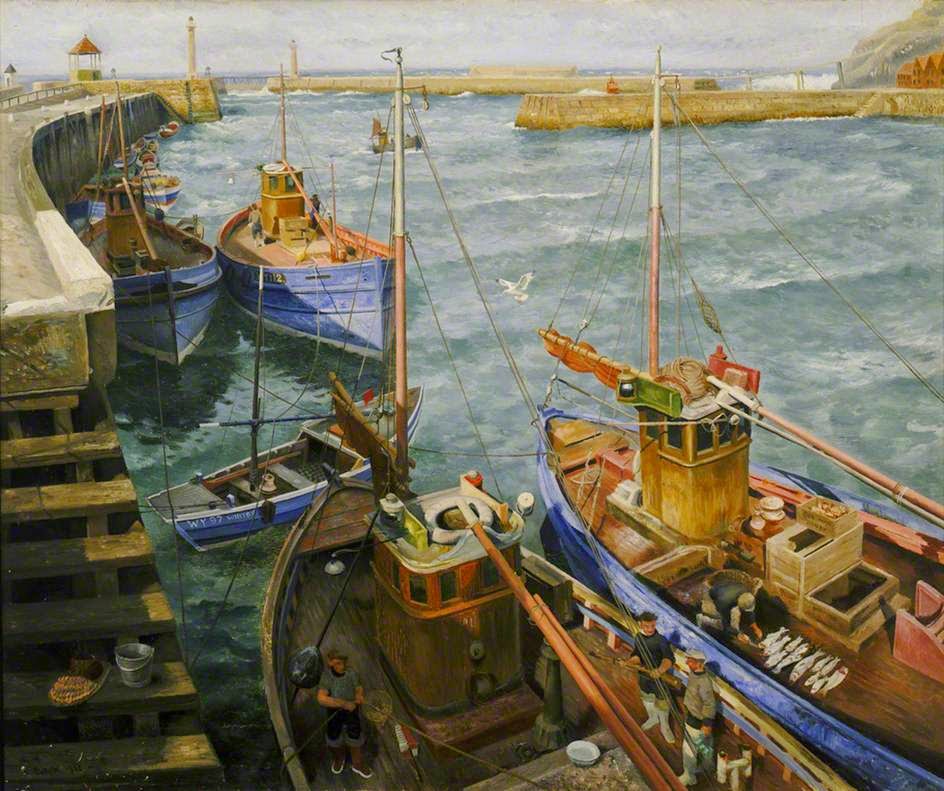 Richard Eurich, "Whitby in Wartime"
Posted by Stephen Pentz at 1:55 AM

Mr Pentz, What a delightful post. Both the Sackville-West and Shanks poems are new to me, and both have so many lovely lines;

And underneath our single riding-light
" The curve of black-ribbed deck gleams palely white," is wonderfully evocative.

I have just been on a walking holiday in Suffolk, a county that still, miraculously seems to inhabit another time. A fortunate condition it seems to me, one of the reasons I have such a fondness for the counties of Suffolk and Norfolk. In some ways it reminds of the
1950's when I grew up; quieter roads, less busyness and a generally slower pace of life.
The Georgian poets are one of those groups to have been unfairly over-shadowed by Modernism and conveniently pushed into the background by being labelled as old-fashioned, and that is enough to cast them firmly into an ill-deserved obscurity.
I agree with you about Eliot. I find The Waste Land rather pretension when I look at it now, though there a few of Eliot's shorter poems which I still read.
I concur with what you say here;
"When it comes to "modernism," I suppose I am an apostate."
Thank you.

Your beautiful prose in this posting matches the dream-like quality of the poems you quote. It's a felicitous juxtaposition. The tone of the posting I find superb.

Mr Ashton: I hope you had a nice holiday. As I think I have mentioned before, Suffolk and Norfolk are high on my list of places to visit the next time I visit England. Your descriptions of them have always made me think that I would enjoy a stay there.

I'm pleased you liked the poems -- they were a nice discovery to me as well. I agree with you about the Georgian poets. You are probably aware of it, but, if not, you may want to have a look at The Georgian Revolt: Rise and Fall of a Poetic Ideal 1910-1922 by Robert Ross (Faber and Faber 1967). It provides an even-handed account of the virtues and weaknesses of the Georgian poets.

As for Eliot, I owe a great deal to him, since, in my younger years, he helped to fire my love for poetry. I cannot say that I read him much now, save for the Ariel poems (which I think are wonderful) and Four Quartets.

As ever, it is very good to hear from you. Thank you very much for your thoughts.

Anonymous: I greatly appreciate your kind words. Thank you very much. Any merit in what I wrote is due to the influence of -- as you aptly describe it --"the dream-like quality of the poems" in the post. Thank you again.

I sometimes feel a similar fond nostalgia for the Edwardian age, for perhaps similar reasons, and with perhaps similar reservations. But I find it interesting that you have attached here to the 1920s rather than the pre-war period. Modernism certainly seems to have been brought to the fore by the Great War and its aftermath, but it is interesting to consider that a current of more conventional literature, such as the poems you have selected, may have continued to run during these years, perhaps never really dying out. I know certain novelists of the 1950s such as William Cooper or Kingsley Amis felt they were recapturing the novel from modernist experimentation. Philip Larkin may have had similar ambitions in poetry, though I don’t know if he ever articulated it as such.

For me, I have a decidedly ambivalent attitude towards the modernists. Joyce, for instance, often strikes me as an insolent twit, and yet I cannot deny that parts of Ulysses, particularly the earlier Leopold Bloom chapters, are among my favorite bits of literature. Eliot is so curious because he was against the modern world in so many ways and yet wrote in such a modern style. I don’t know if that says anything significant about the style. He seems to have been a complex man.

Finally, the Ross book sounds quite interesting. I plan to seek it out. Thank you!

Henry Miller: thank you very much for visiting, and for your thought-provoking comments.

I, like you, have a fondness for the entire Edwardian period, but, as you suggest, the 1920s are of particular interest, aren't they?

The accepted wisdom is that "Modernism" (e.g., Eliot, Pound, Joyce, et al.) cleared out stultification and paved the way for a new era. I, like you, am ambivalent about this claim. And I am particularly skeptical about the long-term impact of "Modernism."

As for the 1920s, we must remember who else was writing poetry at that time (as I know you know): Hardy, Yeats, Frost, Ivor Gurney, Charlotte Mew, to name the best. And A. E. Housman's Last Poems and Eliot's The Waste Land were both published in 1922 (amazingly).

I'm certainly biased in the matter, but I suspect that, in the long term, poems by those six will outlast most everything that Eliot and Pound wrote. (I say this being quite fond of a number of poems written by the latter two. But they both share a fundamental defect, in my mind: a lack of humanity.)

As for Joyce: I agree with you completely. Although I would stop with Dubliners and A Portrait of the Artist as a Young Man.

You are not an apostate. Once William Carlos Williams poured sugar into its gas tank, modern poetry was done for. Now "No ideas but in things" means no ideas at at all. No music, no beauty, nothing memorable. Every little bleat and whine becomes a poem.

I grew up in Frost country- North Charlestown NH.

Betsy: Thank you for stopping by again, and for your thoughts.

I completely agree with you about William Carlos Williams being the progenitor of what has passed for poetry for nearly the past 100 years. But you state it much, much better than I could have: "poured sugar into its gas tank" is wonderful and perfect! At least with Pound and Eliot, there was knowledge of the past, and its value. But Williams threw everything out, and any budding poetaster could look at Williams' "poems" and say: "Hey, I can be a poet too!" Thus (and your description is again wonderful): "Every little bleat and whine becomes a poem." Exactly. Alas.