I once lived in Japan for a year, so I can attest to the fact that the summer heat there can be a stun to the senses.  But, as is usually the case in life, there are compensations.  Thus, for instance, I soon came to share the fondness of the Japanese for cicadas (semi) and fireflies (hotaru), two inhabitants of the "other worlds" that I referred to in my previous post.

When I think back on that summer, what often comes to mind is the constant shrill cry of the semi and the sight of dozens of hotaru floating above the grass beside a river that I sometimes walked along in the evening.  I will save the cicadas for another occasion.  Today I would like to consider the fireflies.

As one might expect, fireflies often find their way into haiku.

Here and there,
The night-grass is green
From the fire-flies.

The first two haiku capture wonderfully the childlike joy I suspect most of us have felt when we come upon fireflies.  "Look!"  And then the urge to chase after them.  But the third haiku is something else entirely.  About it, I will keep my mouth shut and let it speak for itself. 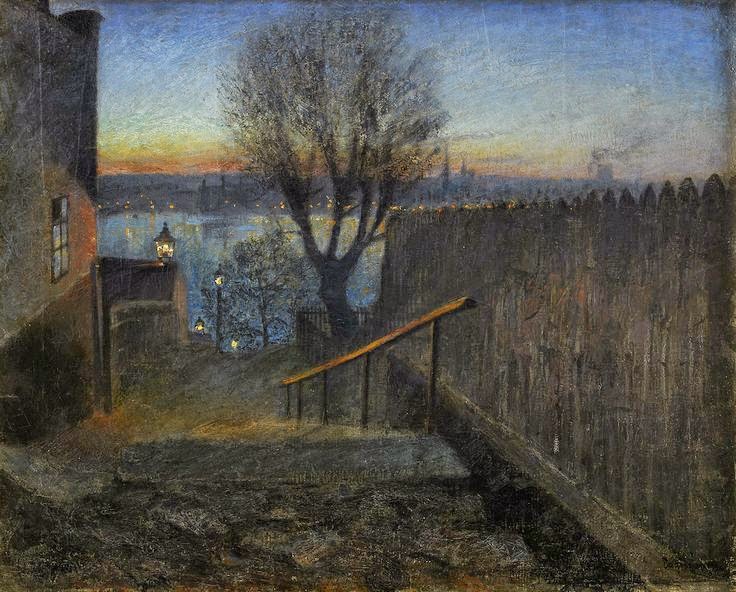 Of course, the fascination with fireflies knows no boundaries of time or space.  In the final sentences of his last published work, John Ruskin writes:

"We . . . walked together that evening on the hills above [Siena], where the fireflies among the scented thickets shone fitfully in the still undarkened air.  How they shone! moving like fine-broken starlight through the purple leaves.  How they shone! through the sunset that faded into thunderous night as I entered Siena three days before, the white edges of the mountainous clouds still lighted from the west, and the openly golden sky calm behind the Gate of Siena's heart, with its still golden words, 'Cor magis tibi Sena pandit,' and the fireflies everywhere in sky and cloud rising and falling, mixed with the lightning, and more intense than the stars."

It is lovely that Ruskin ended his literary endeavors with this image of the fireflies of Tuscany.  The image haunted him.  Here it is again, in an earlier work:

"The Dominican convent is situated at the bottom of the slope of olives, distinguished only by its narrow and low spire; a cypress avenue recedes from it towards Florence . . . No extended prospect is open to it; though over the low wall, and through the sharp, thickset olive leaves, may be seen one silver gleam of the Arno, and, at evening, the peaks of the Carrara mountains, purple against the twilight, dark and calm, while the fire-flies glance beneath, silent and intermittent, like stars upon the rippling of mute, soft sea." 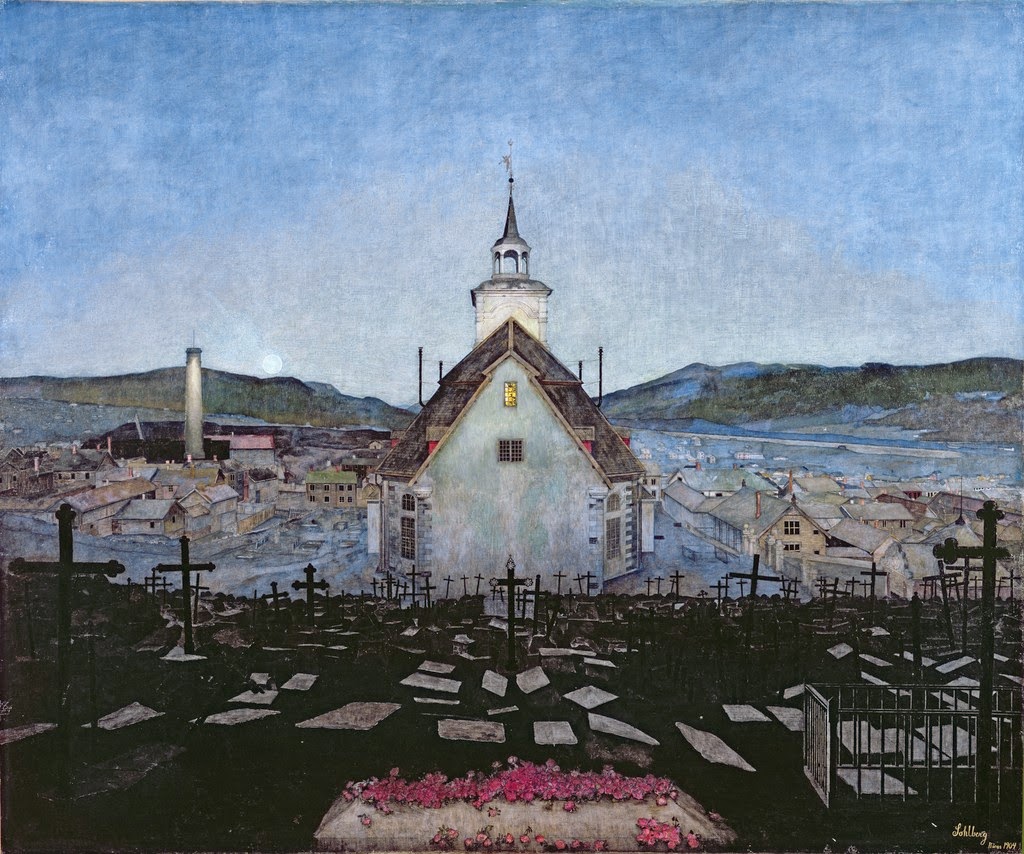 And now, from Japan and Italy, onward to New England.

Fireflies in the Garden

Here come real stars to fill the upper skies,
And here on earth come emulating flies,
That though they never equal stars in size,
(And they were never really stars at heart)
Achieve at times a very star-like start.
Only, of course, they can't sustain the part.

This is vintage Frost:  inflation combined with deflation.  And perhaps (although I may be mistaken) there is one of those Frostian ambiguities. To wit:  what does "start" mean in "Achieve at times a very star-like start"?  A "start" as in a "beginning"?  Or a "start" as in a "sudden involuntary movement of the body, occasioned by surprise, terror, joy or grief, or the recollection of something forgotten"?  OED.  But I may simply be slow on the uptake (as well as being in violation of my own oft-stated strictures about over-interpreting poems). 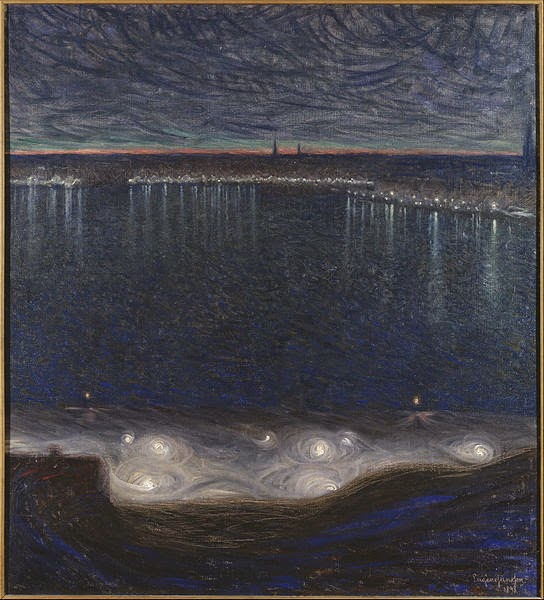 To close, here is Ruskin once more, in a letter written from Pistoia:

"I have just come in from an evening walk among the stars and fireflies. One hardly knows where one has got to between them, for the flies flash, as you know, exactly like stars on the sea, and the impression to the eye is as if one was walking on water.  I was not the least prepared for their intense brilliancy.  They dazzled me like fireworks, and it was very heavenly to see them floating, field beyond field, under the shadowy vines." 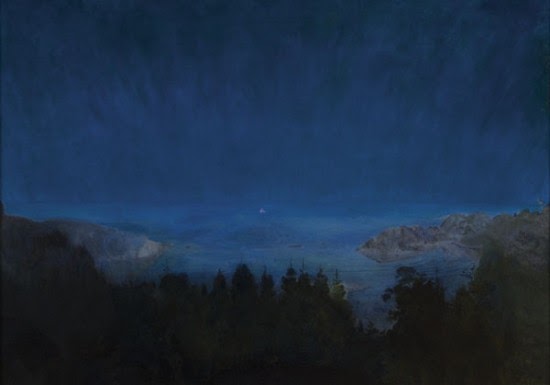 Harald Sohlberg, "Midsummer Night"
Posted by Stephen Pentz at 2:54 AM

Below is a poem titled "Fireflies' by Frank Ormsby. I read the poem in 2009, and, with poems I like, I filed it. When I saw your eloquent post this morning, I immediately thought of Ormsby's poem.

I might add that I found the tone of your today's posting somehow serene, one of those beautiful tranquil moments when we imagine the universe giving us a nudge on the shoulder, as if to say, "In the end all will be well" Is this he message of the firefly in the moonlit garden--hope flickering, here then there and then gone?

Fireflies
The lights come on and stay on under the trees.
Visibly a whole neighbourhood inhabits the dusk,
so punctual and in place it seems to deny
dark its dominion. Nothing will go astray,
the porchlamps promise. Sudden, as though a match
failed to ignite at the foot of the garden, the first squibs
trouble the eye. Impossible not to share
that sportive, abortive, clumsy, where-are-we-now
dalliance with night, such soothing restlessness.
What should we make of fireflies, their quick flare
of promise and disappointment, their throwaway style?
Our heads turn this way and that. We are loath to miss
such jauntiness in nature. Those fugitive selves,
winged and at random! Our flickery might-have-beens
come up from the woods to haunt us! Our yet-to-be
as tentative frolic! What do the fireflies say?
That loneliness made light of becomes at last
convivial singleness? That any antic spark
cruising the void might titillate creation?
And whether they spend themselves, or go to ground,
or drift with their lights out, they have left the gloom,
for as long as our eyes take to absorb such absence,
less than it seemed, as childless and deprived
as Chaos and Old Night. But ruffled too,
as though it unearthed some memory of light
from its long blackout, a hospitable core
fit home for fireflies, brushed by fireflies' wings.

From "Under the Tree" by Elizabeth Madox Roberts:

I never could have thought of it,
To have a little bug all lit
And made to go on wings.
Susan

Anonymous: thank you very much for the kind words about the post, and for your observations on the feelings evoked by fireflies. I like your thought: "In the end all will be well." There is something comforting about seeing them, isn't there? Although I don't know why. Well, yes, beauty, of course . . . but something else too.

But I suppose that this is one of the things Frank Ormsby is trying to get at in his lovely poem -- for which I thank you very much as well. I have posted two poems by him here previously, but "Fireflies" is new to me. It is a wonderful exploration of these wonderful creatures, isn't it? I need to explore his poetry further.

Susan: thank you very much for the poem by Elizabeth Madox Roberts. I now have one more poem to add to my firefly poem collection -- I suspected there were more of them out there. I wasn't aware of Under the Tree, my knowledge of her being limited solely to The Time of Man.

It is always good to hear from you. Thank you for stopping by again.

There is a haiku hidden in Edward Thomas. Only one that I know of and I don't know if I am the only one ever to have noticed it. I don't think it can be there by chance and I know Thomas knew something of Pound and so presumably something about Japanese poetry. I suppose he must have been experimenting in some way. Once you see it it stands out as obvious and you wonder how you never noticed. The poem will never be the same again for you if I tell you where it is. Do you want to know? Perhaps you already know?
Tim W

Tim W: this is news to me, so I would love to know where this haiku may be found. As I pointed out in a prior post (October 27, 2011) on Thomas's "The Long Small Room," he remarked to Eleanor Farjeon that its final line ("The hundred last leaves stream upon the willow") had a "Japanesy [sic] suddenness of ending." So I am intrigued to hear of your discovery.

This could be my life's only noteworthy contribution to Englissh poetry, lol.

Looking at it again I am 100% certain it isn't there by chance but is carefully included. Partly because the fit of syllables and lines is perfect, partly because it is so central to the poem, but mainly because it is totally haiku in that it is a moment captured, a fleeting ability to live fully in the present - totally Zen you might say. Anyway:

Someone cleared his throat.
No one left and no one came
On the bare platform

What do you think?

Tim W: very interesting! I had never noticed that before. I'm not familiar with all of the commentary on "Adlestrop," but, from what I have seen, no one has pointed this out before. I agree with you that Thomas would have been familiar with Pound and Imagism, with their Japanese (and Chinese) influences.

Whether it was intentional or not, it is a wonderful haiku, isn't it? I wouldn't put it past him.

Thank you very much -- this is quite intriguing.

There is also a poem about fireflies in Eugene Lee-Hamilton's Sonnets of the Wingless Hours. I'm sure you've seen it before (I first discovered Lee-Hamilton on this blog), but others might be interested:

Now one by one the live winged sparks of night,
Like souls allowed to wander as they please
Through old loved haunts, go by between the trees
In silent zigzags of alternate light;

And grow in number, bodiless and bright,
So that the eye, too slow to count them, sees
Nothing but fire all round; till by degrees
Quenched in the dawn, they vanish from the sight.

And those more subtle sparks, which they recall,
The countless souls with which regret and love
Once peopled Death's great night, are they quenched too ?

Has Thought's strong dawn, which searches into all,
Reached even them, unpeopling Heaven above,
To leave us nothing but the empty blue?

Andrew: Thank you very much for sharing this -- I haven't read it before. Another poem for the firefly anthology! In addition, it ties in well with the passages from Ruskin since -- as you know -- Lee-Hamilton wrote Sonnets of the Wingless Hours while living in Florence (and suffering from the debilitating illness that left him bedridden for so many years). Thus, both he and Ruskin were writing about the fireflies of Tuscany!

It's very nice to hear from you again. I hope all is well.