And so we move into October.  Leaves are the first thing that comes to mind, at least for me.  Those bearers of joy and wistfulness.  There can never be enough of them, can there?

Placing so much value on them now, wishing them to stay longer as they disappear, I wonder whether I gave them the attention they deserved from spring through summer.  "First known when lost."  Or something like that.

I am reminded of two lines from a poem by Ishikawa Jozan (1583-1672) about fallen cherry blossoms in spring:  "When blossoms were at their finest I neglected to call./The blossoms did not betray me.  I betrayed the blossoms."  Burton Watson (editor and translator), Kanshi: The Poetry of Ishikawa Jozan and Other Edo-Period Poets (North Point Press 1990).

He would have liked to find a use for leaves,
So simple a thing it seemed, so many of them
Flying and falling, going to waste and wet
And stopping up the gutters and the drains
Or drying in the still November days
Until swept into heaps, gone up in smoke
As if all summer's shade had never been.

And so he dreamed, and idly enough,
For many summers, many falls, until
His spell upon the earth was done, come time
To fall, while the useless leaves still came and went,
And the green had told him nothing, nor the sere,
That he might leave for men to profit by.

Funny thing about leaves:  they have no agenda; they pay us no mind. Imagine being nothing but yourself. 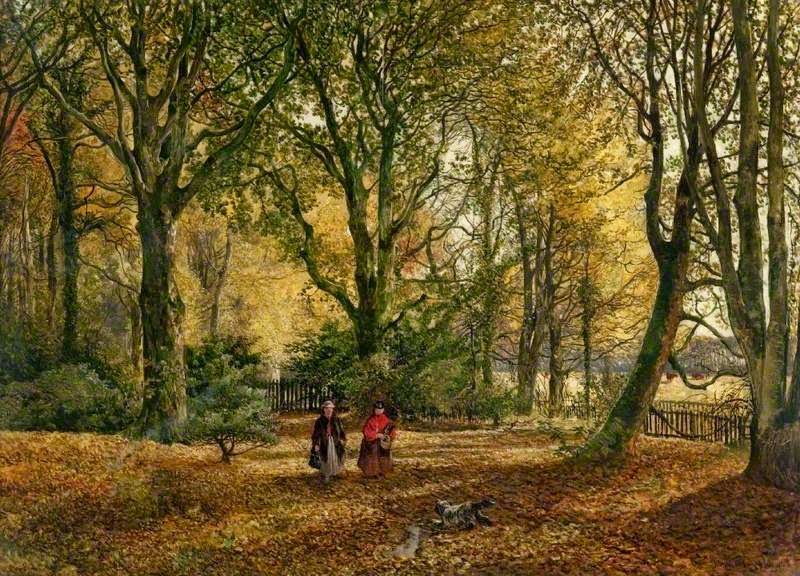 However many years pass, my heart-of-autumn feeling will always come from 50 or so years ago, in the lost land of Minnesota.  The earthy scent that comes after jumping into a pile of raked-up oak leaves.  At dusk, looking down the street at neighbors standing beside their smoky piles of burning leaves.  No, we shan't have any of that anymore, shall we? Someone's idea of "Progress":  an autumn world without the smell of burning leaves.

Spades take up leaves
No better than spoons,
And bags full of leaves
Are light as balloons.

I make a great noise
Of rustling all day
Like rabbit and deer
Running away.

But the mountains I raise
Elude my embrace,
Flowing over my arms
And into my face.

I may load and unload
Again and again
Till I fill the whole shed,
And what have I then?

Next to nothing for use.
But a crop is a crop,
And who's to say where
The harvest shall stop?

"And who's to say where/The harvest shall stop?"  Is this one of those mischievous Frostian endings?  Is it an expression of joy at the inexhaustible beauty of the wondrous World around us?  Or is it a reminder of mortality? 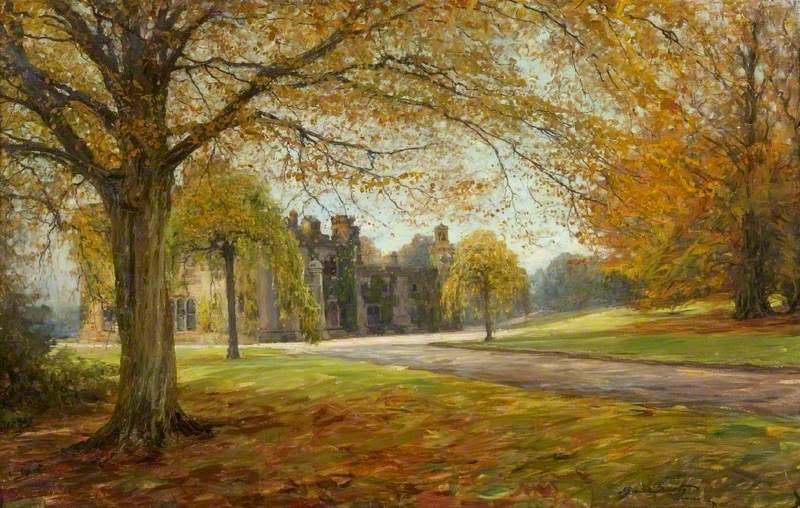 All of this abundance comes our way unbidden, unasked for.

As I suggested in a recent post:  gratitude ought to be with us always. "Who's to say where the harvest shall stop?" I'm pleased to re-read the Frost poem. I'd like to feel he was being mischievious rather than a realist!

Nemerov is a stranger to me, but that is hardly surprising : ) The first line reminds me of a piece I read a year or two back, about being Green and frugal, and it was when a woman's effects were being sorted, and there was a jar entitled "Pieces of string too short to be of any use" . . . I still smile at that. Leaves it seems, are much the same, except to the earth . . .

Bovey Belle: Thank you for stopping by again.

I confess that, for me, it's always hard to tell with Frost. I often feel that I'm not getting it.

As for leaves and pieces of string: well, these "useless" things are often the dearest, aren't they?

As ever, it's good to hear from you.

I work as a school groundsman in a small town in Western Australia, and part of my work each day is to collect the fallen eucalyptus leaves from our lawns at the entrance to the admin block. Often (far TOO often) comment is made by teachers or parents, "That's a never-ending task", to which I reply "Yes, but it keeps me in work".

In truth, I enjoy picking the leaves, feeling that their falling is an important part of the cycle. It is their job to fall, just as it is their job to grow. I pick them respectfully, I hope.

I think, in future, I shall tell my tormentors "a crop is a crop, And who's to say where The harvest shall stop". It is a far better response!

Thank you so much for your blog, which constantly delights and informs.

Mr Rowbottom: Thank you very much for visiting, and for your kind words about the blog.

And thank you as well for the wonderful thoughts about picking up eucalyptus leaves -- I agree with you completely that they deserve our respect. And I love the thought that you may have the chance to quote Frost!

I think Mr Rowbottom's comments about the 'cycle' are quite apposite. There is a long history of seeing the falling of leaves as a metaphor for the brevity of individual human life by comparison with the ongoing renewal of life. In Iliad 6, we find Glaucon saying to Diomedes: 'as are the generations of leaves, so are those of men', whereas part of the Psalmist's definition of the Blessed Man is that he is like a green tree whose leaf never fails.

Girders: I agree that Mr Rowbottom's thoughts are illuminating, as are yours! Thank you very much for carrying this further. I appreciate your references, which are right on point. Now that you two have got me started on this, I'm thinking that my next post will include a translation of a poem by Simonides from The Greek Anthology in which the translator uses Pope's version of the line from The Iliad, Book VI, quoted by you. To wit: "Like leaves on trees the race of man is found. . ."

Again, thank you very much. It's always good to hear from you.