Why is it that certain poems dwell within us for years?  Have no fear!  I am not planning to launch into a meditation on "the art of poetry" or "the wellsprings of creativity."  Nor am I going to go anywhere near "Beauty is truth, truth beauty, -- that is all/Ye know on earth, and all ye need to know."  Discussions of that sort give me the willies.  Ditto with poems about poetry and poems about the writing of poetry.  Please, poetasters, desist!

No, this is a matter of happenstance and good fortune.  It also has something to do with, say, everything that has happened to you in your life up until the day you encounter a poem for the first time.  Oh, yes, and the season.  We mustn't forget the season.

At the top of the house the apples are laid in rows,
And the skylight lets the moonlight in, and those
Apples are deep-sea apples of green.  There goes
A cloud on the moon in the autumn night.

A mouse in the wainscot scratches, and scratches, and then
There is no sound at the top of the house of men
Or mice; and the cloud is blown, and the moon again
Dapples the apples with deep-sea light.

They are lying in rows there, under the gloomy beams;
On the sagging floor; they gather the silver streams
Out of the moon, those moonlit apples of dreams,
And quiet is the steep stair under.

In the corridors under there is nothing but sleep.
And stiller than ever on orchard boughs they keep
Tryst with the moon, and deep is the silence, deep
On moon-washed apples of wonder.

I cannot recall when I first came across "Moonlit Apples."  Twenty years ago?  Thirty?  (I had best stop there, lest I disappear down a narrowing, darkening tunnel.)  I suspect that I found it in Georgian Poetry: 1918-1919. I have a copy of that volume beside me as I write this, and there it is at page 50.  But I may have happened upon it in another anthology.  I'm not certain.  However, I do remember my mounting wonderment and excitement as I read it for the first time.  And I am humbled, and grateful, to say that those feelings have never left me. 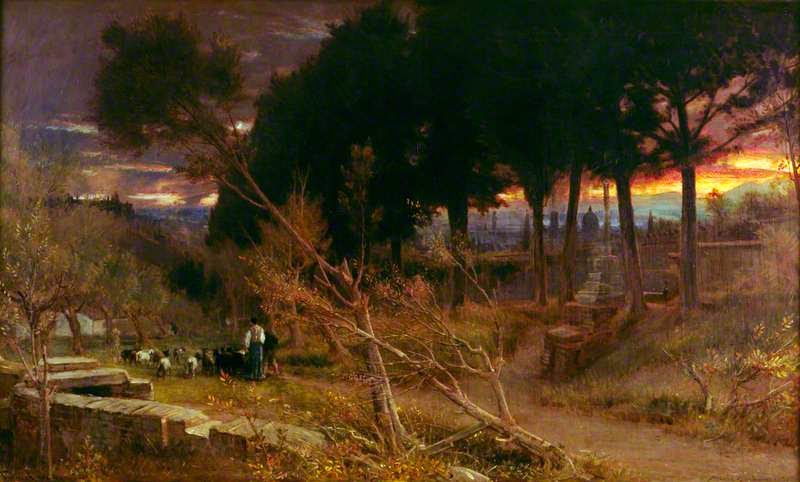 I have intentionally sought not to pick apart what makes "Moonlit Apples" -- at least for me -- beautiful.  As long-time (and much-appreciated!) readers know, my oft-stated basic principle is this:  Explanation and explication are the death of poetry.  Yet here I am writing about poems. And I will no doubt violate my principle by suggesting that the following poem has something to do with what makes "Moonlit Apples" -- or any other poem or work of art -- beautiful.

The one moonlight, in the simple-colored night,
Like a plain poet revolving in his mind
The sameness of his various universe,
Shines on the mere objectiveness of things.

It is as if being was to be observed,
As if, among the possible purposes
Of what one sees, the purpose that comes first,
The surface, is the purpose to be seen,

The property of the moon, what it evokes.
It is to disclose the essential presence, say,
Of a mountain, expanded and elevated almost
Into a sense, an object the less; or else

To disclose in the figure waiting on the road
An object the more, an undetermined form
Between the slouchings of a gunman and a lover,
A gesture in the dark, a fear one feels

In the great vistas of night air, that takes this form,
In the arbors that are as if of Saturn-star.
So, then, this warm, wide, weatherless quietude
Is active with a power, an inherent life,

In spite of the mere objectiveness of things,
Like a cloud-cap in the corner of a looking-glass,
A change of color in the plain poet's mind,
Night and silence disturbed by an interior sound,

The one moonlight, the various universe, intended
So much just to be seen -- a purpose, empty
Perhaps, absurd perhaps, but at least a purpose,
Certain and ever more fresh.  Ah!  Certain, for sure . . .

As I have noted in previous posts, the poetry of Wallace Stevens' final years displays an acceptance of -- and love for -- the World as it is, with less of an insistence on asserting the primacy of the Imagination over Reality.  Of course, he never surrendered entirely.  After all, writing poetry was for him the quintessential activity of the Imagination.  One can see this tug-of-war take place in "Note on Moonlight," which was published less than a year prior to his death at the age of 75.

The final stanza is, I think, one of the most moving things that Stevens ever wrote.  "Intended so much just to be seen" is wonderful.  And how about that last line? 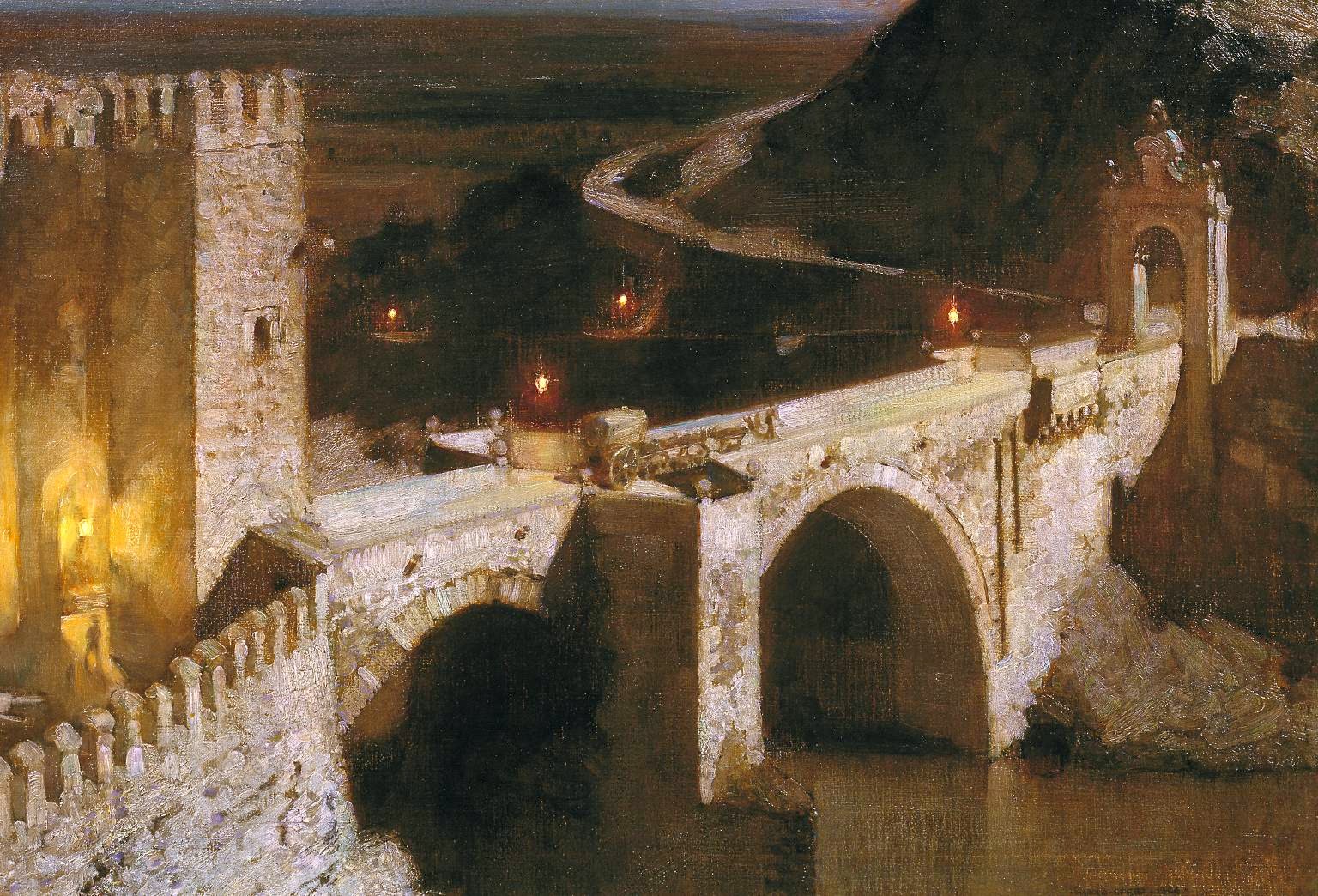 The following poem appears on the page facing "Moonlit Apples" in John Drinkwater's 1917 collection Tides.  They make a lovely pair.

Out of the Moon

Merely the moonlight
Piercing the boughs of my may-tree,
Falling upon my ferns;
Only the night
Touching my ferns with silver bloom
Of sea-flowers here in the sleeping city --
And suddenly the imagination burns
With knowledge of many a dark significant doom
Out of antiquity,
Sung to hushed halls by troubadours
Who knew the ways of the heart because they had seen
The moonlight washing the garden's deeper green
To silver flowers,
Falling with tidings out of the moon, as now
It falls on the ferns under my may-tree bough. 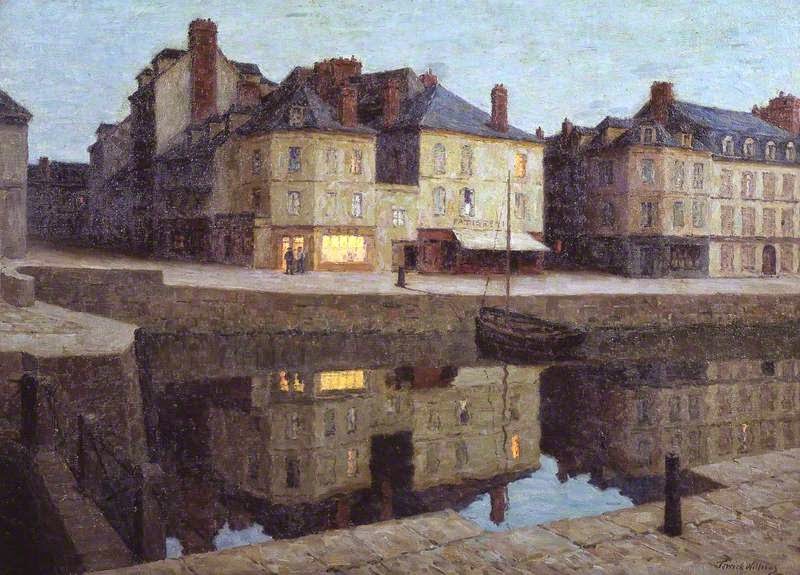 As I have noted on more than one occasion, Japanese and Chinese poems often help to put our longer-winded English lyrical apostrophes into perspective.

Autumn's bright moon,
However far I walked, still afar off
In an unknown sky. 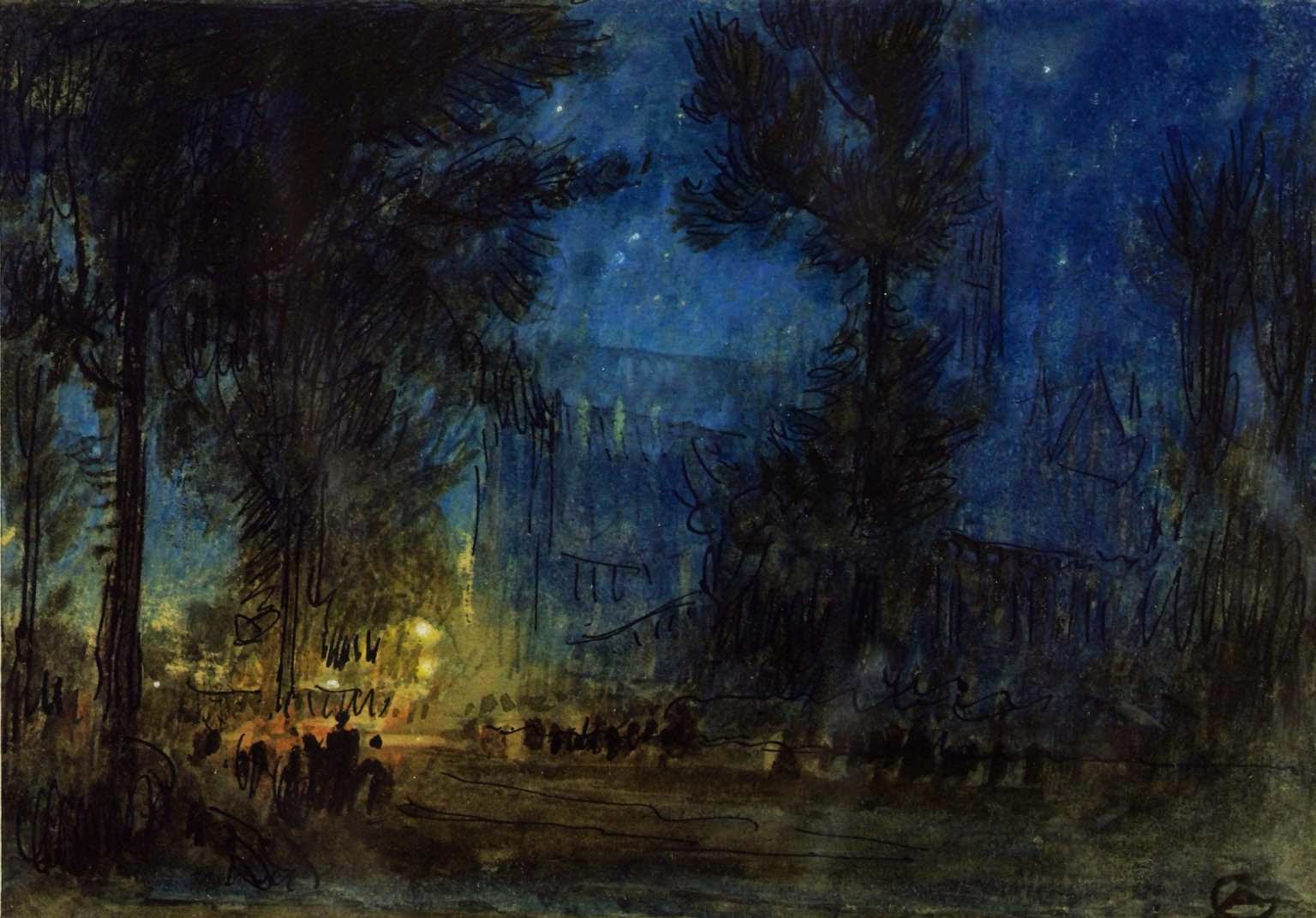 Albert Goodwin, "Salisbury"
Posted by Stephen Pentz at 3:00 AM

I love the image of a moon-washed apple conjured by the poet.

Ms Greeley: Yes, it's a lovely image, and a wonderful poem, isn't it? (Perhaps something you could paint!) Its sound and rhythm are very nice as well -- lulling and peaceful.

It's good to hear from you again. Thank you for stopping by.

When I was a boy, not much older than nine or ten, my aunt gave me a book of illustrated poetry for Christmas. I spent hours poring over this book. I find that over time that even though I have forgotten some of the poems, I can recall most of the illustrations.

One of the illustrated poems was T. E. Hulme's poem Autumn. I can remember still that huge orange-tinted ("ruddy") moon hanging just over a hedge flanking an autumn field, stacks of hay arranged symmetrically, moonlight spilling prodigally over the scene.

A touch of cold in the Autumn night --
I walked abroad,
And saw the ruddy moon lean over a hedge
Like a red-faced farmer
I did not stop to speak, but nodded,
And round about were the wistful stars
With white faces like town children.

The Autumn moon floats in the thin sky;

As she passes over them.

Thank you for the lovely poems. I had never read "Moonlit Apples" - very beautiful. Called to mind the line from Garcia-Lorca's "Gacela of the Dark Death" -"I want to sleep the dream of the apples"
Mary

Anonymous: Thank you very much for that memory, and for the poem by Hulme, which is one of my favorite autumn poems. In addition to the image of the moon, "the wistful stars with white faces like town children" is wonderful as well, isn't it? Another great talent lost in the First World War.

Anonymous: Thank you very much for the poem by Lowell, which goes very well here. Coincidentally, another commenter recently quoted the poem in a recent post (which I can't put my finger on at the moment). I'm delighted to have it appear once more in another context -- it is a lovely poem. I need to explore her poetry further.

Mary: It's very nice to hear from you again. I'm pleased you liked "Moonlit Apples," and I'm happy to have helped lead you to it. Thank you very much for the line from Garcia Lorca, which is new to me: lovely, and a perfect complement to "Moonlit Apples."

It's somewhat hard to believe that Shelley was Hardy's favorite poet, harder to fathom than that Bryon's favorite was Pope.

The last stanza Shelley's poem below can be compared perhaps with Keats's "Ode to a Nightingale." A world "far from ours,/Where music and moonlight and feeling /Are one" is forever forbidden to us: the world "where men sit and hear each other groan / /Where youth grows pale, and specter-thin, and dies / Where but to think is to be full of sorrow / And leaden-eyed despair . . ." yes, this ideal world purged of suffering and mortality, a world of unimpeded beauty, is at loggerheads with the human condition, the human fate.

Shelley, at least in this poem, seems to understand the impossibility of humans transcending our fleshy confinement. When he, on his boat, the "Ariel," with Jane Williams playing the guitar and singing, off the coast of Italy, the night beautiful, Shelley comes as close as one can come to stepping into world beyond this one. Of course even as the experience that night overpowers him, is sublime, a part of him is shackled to the irrevocable constraints under which a self-conscious but mortal creature must exist in what seems sometimes to be an indifferent universe.


To Jane: The Keen Stars Were Twinkling

The keen stars were twinkling,
And the fair moon was rising among them,
Dear Jane!
The guitar was tinkling,
But the notes were not sweet till you sung them
Again.

As the moon's soft splendour
O'er the faint cold starlight of Heaven
Is thrown,
So your voice most tender
To the strings without soul had then given
Its own.

The stars will awaken,
Though the moon sleep a full hour later,
To-night;
No leaf will be shaken
Whilst the dews of your melody scatter
Delight.

Though the sound overpowers,
Sing again, with your dear voice
Revealing
A tone
Of some world far from ours,
Where music and moonlight and feeling
Are one.

Anonymous: Thank you very much for sharing the Keats and Shelley: what would a consideration of poetic moonlight be without those two? Shelley's distinction between the "keen stars" and "cold starlight" and the moon is nice.

Your mention of Hardy reminds me: I ought to devote a post (or two) to his poems on the moon and moonlight -- as you know, there are a large number of them.

You have encouraged me to investigate my ET books for mention of Drinkwater's Moonlit Apples (so atmospheric). I am certain it was written when they were together at Dymock, but must now satisfy my curiosity. I think Drinkwater is a greatly overlooked poet in this day and age.

Bovey Belle: I agree with you that Drinkwater's poetry is overlooked. He wrote a number of lovely poems. You may already be familiar with it, but, if you aren't, I recommend a small prose book by him entitled The World and the Artist (1922). In it, he discusses the impact of what he calls "mechanical civilization" on us all. It is available on the Internet Archive.

Regarding E. T. and Drinkwater (and "Moonlit Apples"): that's an interesting thought. Please let me know if you discover anything. Based upon your comment, I took a look at R. George Thomas's biography, and only found one reference to Drinkwater, which was not pertinent.