Back in August, I mentioned a row of maple trees that I pass beside in my walks through a marina.  At that time, the trees provided one of the first hints of autumn, as did a small flock of Canadian geese that circled the shores of the Sound.

The trees are now half-empty.  The leaves that remain are a brilliant deep-red.  A wistful sight, of course.  But this week, grieving over the departed and departing leaves, I received an unexpected gift.  As I walked beneath the maples, I noticed the shapes of dozens of leaves on the sidewalk:  the remnants, in rusty-brown pigment, of leaves that have vanished in the wind, but which once covered the sidewalk in the rain.

These revenants seemed to lay the whole of the season before me in an arc, from the sun-struck red and green boughs of late August to the dark, bare branches and the fluttering red stragglers of October.  And ghost leaves on the ground beneath my feet.

Song at the Beginning of Autumn

Now watch this autumn that arrives
In smells.  All looks like summer still;
Colours are quite unchanged, the air
On green and white serenely thrives.
Heavy the trees with growth and full
The fields.  Flowers flourish everywhere.

Proust who collected time within
A child's cake would understand
The ambiguity of this --
Summer still raging while a thin
Column of smoke stirs from the land
Proving that autumn gropes for us.

But every season is a kind
Of rich nostalgia.  We give names --
Autumn and summer, winter, spring --
As though to unfasten from the mind
Our moods and give them outward forms.
We want the certain, solid thing.

But I am carried back against
My will into a childhood where
Autumn is bonfires, marbles, smoke;
I lean against my window fenced
From evocations in the air.
When I said autumn, autumn broke. 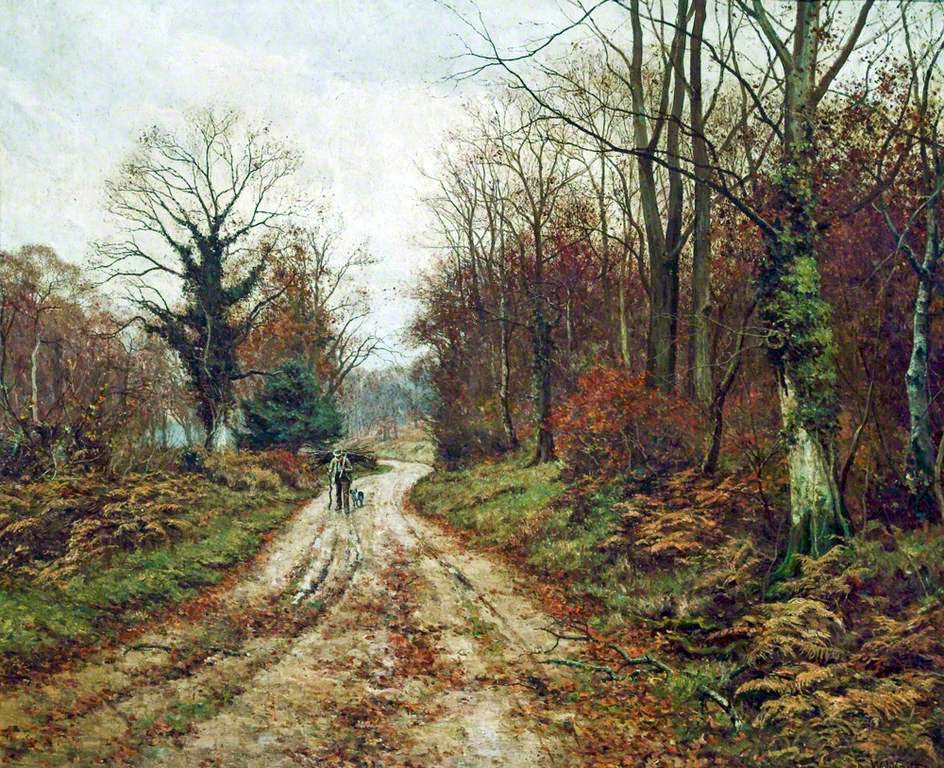 The following poem registers a high reading on the Autumn Wistfulness Quotient.  Although it has appeared here before, it is a poem that deserves repeated visits.

The combination of lovely, exact particulars and evocative, ever-expanding images is marvelous.  On the one hand:  "dead leaves/On their way to the river/Scratch like birds at the windows/Or tick on the road."  Exactly.  On the other hand:  "the prisoners of infinite choice," "an afterlife/Of dead leaves,/A stadium filled with an infinite/Rustling and sighing," and "the heaven/Of lost futures."  Wonderful. 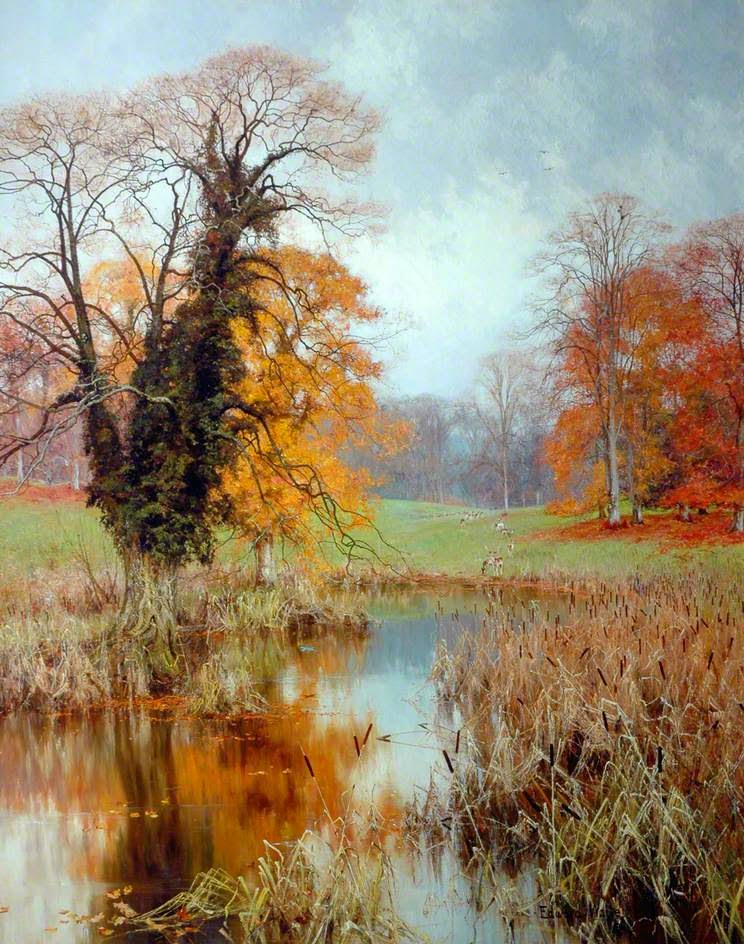 Finally, a poem for the end of the arc.

Lost in vacant wonder at how the months flow away in silence,
I sit alone in my idle hut, thinking endless thoughts.
An old man's cares, like these leaves, are hard to sweep away.
To the sound of their rustling I see autumn off once again.

The traditional Chinese and Japanese poets tend to be fairly stoic, but this stoicism is combined with an absolute commitment to stating things exactly as they are.  Thus, we should not read any note of complaint or self-pity into Tate Ryuwan's poem (which is in the form of a kanshi, a poem written in Chinese by a Japanese poet, adhering to the strict rules of traditional Chinese prosody).  He is simply reporting how things are with him and with the World at the end of autumn.  The poem exhibits that distinctive quality of the best Chinese and Japanese poetry:  the leaves are not "symbols," nor are they a "metaphor" or an "allegory," yet the human world and the natural world become one and the same.  Or so it seems to me. 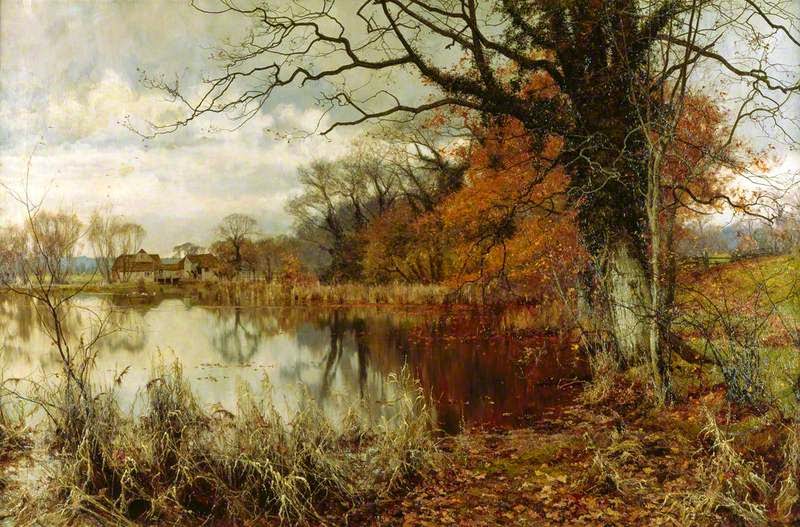 Another poem about golden October at its end flaring brilliantly at its ripest, holding its beauty as if cannot let it go, as if time holds its breath for an enchanted moment, and then with a heavy sigh, or so it seems to the poet, it drifts into the twilight.

MO October morning mild,
Thy leaves have ripened to the fall;
Tomorrow’s wind, if it be wild,
Should waste them all.
The crows above the forest call;
Tomorrow they may form and go.
O hushed October morning mild,
Begin the hours of this day slow.
Make the day seem to us less brief.
Hearts not averse to being beguiled,
Beguile us in the way you know.
Release one leaf at break of day;
At noon release another leaf;
One from our trees, one far away.
Retard the sun with gentle mist;
Enchant the land with amethyst.
Slow, slow!
For the grapes’ sake, if they were all,
Whose leaves already are burnt with frost,
Whose clustered fruit must else be lost—
For the grapes’ sake along the wall.
--Robert Frost

Mr Pentz, the Elizabeth Jennings poem is wonderful.So many memorable lines. These especially take me back to my own childhood;

"But I am carried back against
My will into a childhood where
Autumn is bonfires, marbles, smoke"

Elizabeth Jennings is another of those poets I find myself coming back to more and more often. There is another autumn poem of hers which I love for its simplicity. Perhaps you know it already.

Fragile, notice that
As autumn starts, a light
Frost crisps up at night
And next day, for a while,
White covers path and lawn.
'Autumn is here, it is,' Sings the stoical blackbird
But by noon pure gold is tossed
On everything. Leaves fall
As if they meant to rise.
Nothing of nature's lost,
The birth, the blight of things,
The bud, the stretching wings.

Thank you too for the beautiful Edward Waite paintings.Autumn Colouring is lovely.

Anonymous: Thank you very much for "October," which goes well here. At this time of year, I am always in accord with Frost's cry of "Slow, slow!" But there's no stopping things, is there?

Mr Ashton: Yes, I ought to visit her poetry more than I do. Thank you for "Autumn," which I had forgotten about. "Nothing of nature's lost" is very nice. It provides a fine complement to Hardy's "Earth never grieves," which has recently been on my mind a great deal.

I'm pleased you like Waite's paintings. On first seeing "Autumn Colouring," I thought the colors in it were perhaps too bright. But, the more I thought about, I realized that they are just right.

I don't know of any other poem that connects the arrival of fall, it's indelible signs--days shorter, nights cooler, leaves turning color, a late October stripping them from limbs and whirling them through sheets of golden light--with man's mortality, his inescapable death, than Auden's "Autumn Refrain." The angel will not come, but the mountains will endure--even if we cannot drink from the cool streams, except in our dreams.

Now the leaves are falling fast,
Nurse's flowers will not last,
Nurses to their graves are gone,
But the prams go rolling on.

Whispering neighbors left and right
Daunt us from our true delight,
Able hands are forced to freeze
Derelict on lonely knees.

Close behind us on our track,
Dead in hundreds cry Alack,
Arms raised stiffly to reprove
In false attitudes of love.

Scrawny through a plundered wood,
Trolls run scolding for their food,
Owl and nightingale are dumb,
And the angel will not come.

Clear, unscalable, ahead
Rise the Mountains of Instead,
From whose cold, cascading streams
None may drink except in dreams.

Anonymous: Thank you very much for your thoughts on autumn, and for the poem by Auden. I particularly like "the Mountains of Instead" (whatever it may mean). It goes well with Mahon's "the prisoners of infinite choice," "the heaven of lost futures," and "the lives we might have led," I think. But maybe I am over-reaching.

Bright and golden October has seeped away, and today November auguring the monochrome of winter stepped in dourly--a cold rain fell all day.

Perhaps November has a stark beauty of its own, one born in pensive and melancholy thoughts, the quiet and contemplative heart brooding sweetly on the sodden and darkening blossom lying on the ground before the trellis.

My Sorrow, when she’s here with me,
Thinks these dark days of autumn rain
Are beautiful as days can be;
She loves the bare, the withered tree;
She walks the sodden pasture lane. 5

Her pleasure will not let me stay.
She talks and I am fain to list:
She’s glad the birds are gone away,
She’s glad her simple worsted gray
Is silver now with clinging mist. 10

The desolate, deserted trees,
The faded earth, the heavy sky,
The beauties she so truly sees,
She thinks I have no eye for these,
And vexes me for reason why. 15

Not yesterday I learned to know
The love of bare November days
Before the coming of the snow,
But it were vain to tell her so,
And they are better for her praise. 20

The Waite paintings are lovely. The colors in all of them are just right for each part of the changing season.
They look splendid when enlarged.
Susan

Anonymous: Thank you very much for sharing "My November Guest." It is a perfect poem with which to begin the month.

Susan: I'm pleased you like Waite's paintings. The way they capture the light of autumn is wonderful. I agree with you that they look even better when enlarged, particularly "The Mellow Year Is Hastening to its Close."

As always, it's very nice to hear from you. Thank you very much for visiting again.