I tend to be surprised by things like a caterpillar deciding to cross a street. Or a hummingbird suddenly appearing to look in at me from the other side of a window.  As for life as we human beings lead it, I'm afraid that nothing we do takes me aback any longer.  I am saddened, yes.  Surprised, no.  Not that I claim to possess any wisdom about how to live, mind you. It's just that we have never changed and we never will.

"How unacquainted is that man with the world, and how ridiculous does he appear, that makes a wonder of anything he meets with here?"

Here is another translation:

"How ridiculous, and like a stranger is he, who is surprised at anything which happens in life!"

Possessed by fear and suspicion,
mind agitated, eyes alarmed,
we desperately invent ways out,
plan how to avoid the inevitable
danger that threatens us so terribly.
Yet we're mistaken, that's not the danger ahead:
the information was false
(or we didn't hear it, or didn't get it right).
Another disaster, one we never imagined,
suddenly, violently, descends upon us,
and finding us unprepared -- there's no time left --
sweeps us away. 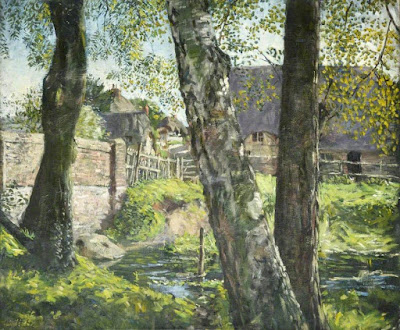 For Marcus Aurelius and the other Stoics, Do not be surprised is not a justification for pessimism or cynicism.  Instead, it goes hand-in-hand with another injunction:  carpe diem.  (Which we heard about from Horace earlier this year.)  And carpe diem is not a justification for licentiousness or hedonism:  the Stoics had no time for ignoble behavior.

Still, how many of us can live up to the ideals of Marcus Aurelius and Epictetus?  I know that I can't.

As they sit there, happily drinking,
their strokes, cancers and so forth are not in their minds.
Indeed, what earthly good would thinking
about the future (which is Death) do?  Each summer finds
beer in their hands in big pint glasses.
And so their leisure passes.

Perhaps the older ones allow some inkling
into their thoughts.  Being hauled, as a kid, upstairs to bed
screaming for a teddy or a tinkling
musical box, against their will.  Each Joe or Fred
wants longer with the life and lasses.
And so their time passes.

Second childhood; and 'Come in, number 80!'
shouts inexorably the man in charge of the boating pool.
When you're called you must go, matey,
so don't complain, keep it all calm and cool,
there's masses of time yet, masses, masses . . .
And so their life passes.

Gavin Ewart, Selected Poems: 1933-1988 (1988).  A side-note:  Philip Larkin included this poem in the Poetry Supplement anthology that he compiled on behalf of The Poetry Book Society for Christmas of 1974.  Now that's something I'm not surprised at:  it sounds like a poem that Larkin could have written himself.  A second side-note:  on men in charge of boating pools calling out one's number, please have a look at Derek Mahon's "September in Great Yarmouth" (which has appeared here previously): "The boatman lifts his megaphone:/'Come in, fifteen, your time is up.'"

It goes without saying (but I will say it anyway):  we are all Yorkshiremen in pub gardens. 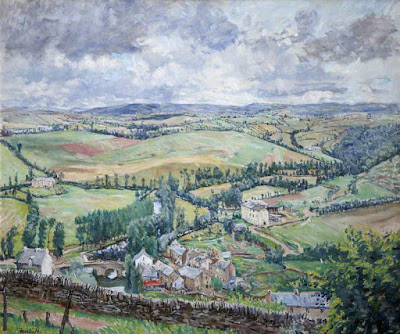 Yorkshiremen in pub gardens.  Or drifting on a peaceful pond, waiting for the boatman to call our number.  A perfectly reasonable way to live.  We all have something to bear in mind, but not to obsess over.  A gentle reminder from the Stoics:

A little late, but still in time
For the end of Z Cars,
After a drink in town with a friend,
On the last lap
The road downhill from the Tube,
Puffing at your pipe, puffing
Too at yourself.

Just at the bend, and almost home,
A -- what? -- a curious behaviour
In the chest, a rush-hour press
And stab of bodies, elbows, feet.

Well, at your age not unheard of
(Nor unread of, every morning),
Yet oddly, no embarrassment
(Must thank the drink for that)
At what portends a sorry solecism,
An exhibition you were brought up
Not to make,
But even some amusement
(Childish, suited to a childish mood)
As you remember:
Your season ticket, it expires today. 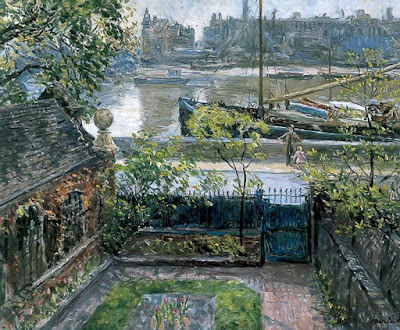 I have a slightly different translation by Rae Dalven who translates the title as "Finalities." The point is the same though--don't waste time preparing for future catastrophes for the one that happens inevitably will be the unexpected one.

How admirable!
to see lightning and not think
life is fleeting.
--Basho

Or, if there were a sympathy in choice,
War, death, or sickness did lay siege to it,
Making it momentary as a sound,
Swift as a shadow, short as any dream;
Brief as the lightning in the collied night,
That in a spleen, unfolds both heaven and earth,
And ere a man hath power to say "Behold!"
The jaws of darkness do devour it up:
So quick bright things come to confusion.

Lysander in "Midsummer Night's Dream" sums the vissitudes of life, how in an instant the most commonplace and habitual act can come to chaos. Humans, though we don't like to dwell on the cruel truth, live in an uncertain world, one random and indifferent and perilously dangerous. It is fortunate that the bright sun and the blue sky and the crested cardinal at the feeder beguile us--and we go forth most days thinking, even if not acutely self-conscious, the world a benign place. If we peered into the abyss would we be paralyzed with anxiety, each day a monstrous event, the unfolding of our dark fate, the dark creature behind every tree, lurking at every intersection, mocking us with every cough, every pain? Larkin reminds us of how futile it is to wait for our ship to come in. Only one vessel, he says, is coming for us all: "a black- / Sailed unfamiliar, . . . / A huge and birdless silence. In her wake / No waters breed or break."

Perhaps it's too much Hardy of late, too much Larkin, too much Sisson, but they, along with Stevens and Dickinson, are poets I read over and over. These poets don't try, so I think, to deceive me with moonshine and soothing illusion. We can learn, I'd like to think, from any great poet, but I find the poets who are cynosures to me, their interpretations of human existence, are congruent with my experiences and the conclusions, no matter how exiguous the truths, how meager tenents to live by, I have drawn from them.

I read your post this morning. You spoke of serious matters, eloquently as always, but your eloquence was only an attractive ancillary to your "message," if I may use the word. For me your post today got down to the "rag and bone shop of the heart."

After reading your post, I went to my study window, looked out at the warm summer rain beading on the river birches. I thought of lines I had read earlier in the morning, lines from C. H. Sisson (below). Do we, after years of observing the world, find ourself emptied of hope, purged of ambition, even as warm rain falls on a green world?

When I thought what I would do
Fifty years ago, I knew
There must be something I'd do well,
What it was I could not tell;
I had not done it, that was clear
Nor have I now. How can there be
Ignorance enough left to me
For Hope to feed on, when there isn't
Enough delusion for ambition.

Fred: Interesting how even the title varies among translators. John Mavrogordato (1951) also uses "Finalities." Daniel Mendelsohn (2009) and Evangelos Sachperoglou (2007) both used "Finished." But, as you say, the essential gist is the same in all translations: you never know what you're in for.

As always, thank you very much for stopping by, and for sharing your thoughts.

Anonymous: Thank you for sharing the haiku by Basho, which is apt. Here is R. H. Blyth's translation, which is similar:

How admirable,
He who thinks not, "Life is fleeting,"
When he sees the lightning flash.

R. H. Blyth, Haiku, Volume 3: Summer-Autumn (1952), page 72. Here is Blyth's commentary on the haiku (in full): "Whitman says, 'And I say to any man or woman,/Let your soul stand cool and composed before/a million universes.'" Ibid.

Haiku always reminds us that we ought not to think too much.

Mr Floyd: Thank you very much for your thoughtful and thought-provoking meditation, which gives us a great deal to reflect upon. All of the poets that you refer to, and quote, deserve our attention when it comes to these matters. As you suggest, each of them is unflinching in looking at these things.

As ever, I greatly appreciate your taking the time to share your thoughts. Thank you again.

We have made tremendous technological progress over the centuries, and this progress seems be growing exponentially. I don't think many of us will complain. If it weren't for medical progress I wouldn't be alive to write these evanescent words. Had my father waited a year to have his massive heart attack, he could have had a bypass operation and lived many more years. We spend, sometimes it seems, half our life whisper "what if" to ourselves.

But what progress has been made in the human condition, those things that haunt our minds at four in the morning. Does life have a purpose? Is the universe working toward some end? What happens when we die? What are we here for? Why this suffering? Is there a God?

Even with all out technological wonders, we cannot escape anxiety and confusion. On the eternal questions of the human heart we are still abysmally ignorant.

In truth, in the most important ways, we haven't made any real progress since the ancient Greeks. The below few words by Oedipus, in "Oedipus at Colonus," written when Sophocles was an old man, one sifting his experience to find some truth, say as much as we can say about humanity. What more can be said?

Time, Time, my friend,
Makes havoc everywhere; he is invincible.
Only the gods have ageless and deathless life;
All else must perish. The sap of earth dries up,
Flesh dies, and while faith withers falsehood blooms.
The spirit is not constant from friend to friend,
From city to city; it changes, soon or late;
Joy turns to sorrow, and turns again to joy.
Between you and Thebes the sky is fair; but Time
Has many and many a night and day to run
On his uncounted course; in one of these
Some little rift will come, and the sword's point
Will make short work of this day's harmony.
Then my cold body in its secret sleep
Shall drink hot blood. If this is not to be,
Zeus is not Zeus, and Phoebus is not true!

But, then, why should we expect any "progress" in humanity? When it comes to human nature, I have never thought that "progress" is in the cards. To think otherwise is political and philosophical utopianism, divorced from reality. Of course, I am grateful for medical advances and for reliable plumbing. But human nature has never changed. Never will. (End of rant.)