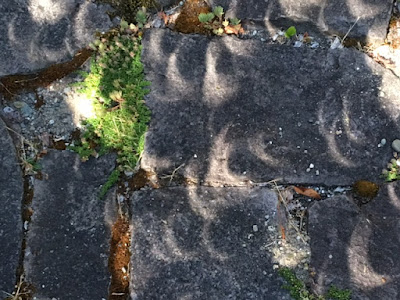 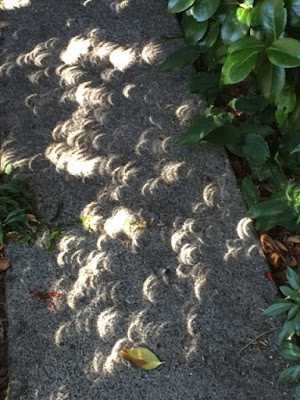 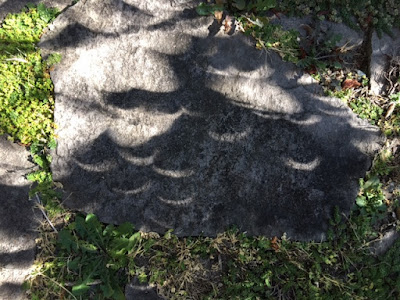 I remember seeing that effect in Bavaria in 1999. But Monday I was on an eighth-floor terrace, and couldn't see the effect in shadows at street level.

Stephen, your blog posts are usually so at odds with current events and so unfettered to a particular place or time that I found it almost startling to see one inspired by a big shared event!

My girlfriend and I watched the Great Gig in the Sky from the Cherokee reservation in North Carolina. As the totality approached, drummers and chanters on the nearby fairgrounds set a tone of genial, raucous excitement. Then the totality hit, everyone took off their glasses, and...well, I've never before been in the presence of thousands of people awed into a sort of reverent murmuring. The sight was eerily beautiful, and no photo I've seen can ever capture it. After 95 seconds it was over, and everyone smiled and trundled off--as millions of little crescents continued to wax in the shade of trees. What a strange and lovely day.

Eclipse! Here in our sad little enclave of Africa, there is a local tradition that eclipses occur because a giant crocodile eats the sun, one huge mouthful at a time. Witnessing an eclipse here (and we've had total, partials and moon eclipses in the last two decades) is simultaneously terrifying (if one indulges in myth for the eclipse duration) and fascinating (if one has recourse to science). Both are acceptable and even advisable. While science and rationale will hold sway, there is much to be gained from imagining a Brobdingnagian reptile, slithering with its dry rustling belly scales through clouds and wind and air; sidling up to our great star and snapping off pieces. Perhaps a fiery salamander would be more appropriate. But we do not have them here.

Thank you for the beautiful pictures. Always, the eclipse half-dusk takes the birds by surprise and they hustle their children into bed swiftly, only to re-emerge (deeply confused) when the sun once more asserts itself. Strangely enough, to see the crescent-shaped shadows on the ground makes me feel bits of the moon are lying on the earth. Thus, the sun becomes food, the moon becomes earth, the light becomes half-dark, a photographic negative of itself.

No wonder we need myths to explain eclipses. There is nothing more unnatural, and simultaneously natural, in our tiny patch of cosmos.

As always, your posts inspire and delight. Many, many thanks. Penn

George: It's something one is not likely to forget, isn't it? I wasn't aware of this phenomenon (shows how little I know!), which no doubt contributed to my surprise and delight: at first I thought I was imagining what I was seeing on the ground. I hope that my memory is as good as yours, and that these images remain with me far into the future.

Jeff: Thank you very much for sharing your experience: your phrase "eerily beautiful" describes what I felt as well; I can only imagine what it must have been like to witness the "Great Gig" itself. Your description of the crowd growing quiet in awe is wonderful. (After the partial eclipse ended here, I was watching television coverage of the eclipse as it moved eastward. Somewhere in the Midwest or the South, in a big stadium, they were blaring out one of the songs from The Dark Side of the Moon as totality occurred, which I thought was a terrible idea: can't we have silence for a few seconds now and then, especially at a moment such as that? But I am no doubt a curmudgeon when it comes to that sort of thing.)

As for the nearly present tense nature of my post: it felt odd to me as well. As you know, "news" is something I try my best to avoid. But the event overcame my reluctance.

As ever, it is a pleasure to hear from you. Thank you for stopping by again.

Penn: Thank you very much for those wonderful descriptions, and for your accompanying thoughts. From them, it is quite clear that you do NOT live in a "sad little enclave" at all! For instance, I love the thought of a giant crocodile eating the sun piece by piece. Wonderful! That is indeed poetry. Regarding your thoughts on the competing claims of science and myth: I far prefer the latter, and avoid the former. Your description of the activity of the birds is lovely. And your thought about the crescents being "bits of the moon . . . lying on the earth" is marvelous: exactly so! (Again demonstrating that science is best put aside on such occasions -- and, actually, on most occasions, as far as I am concerned.)

Thank you very much for your kind words about the blog, and for visiting again. I hope you'll return soon.

While waiting for the eclipse to begin I was reading The Death of Virgil, well, plowing through it and at times skimming, okay all three. Afraid I dozed off, to awake with a start thinking " oh darn its clouded up". No, no, you idiot, look at the time, two minutes past as total as the eclipse got here 72%. Watched the rest of the eclipse through a welding hood lense and a scrim of high clouds that thicken near the eclipse's end.

What started me on this though was that your post and photos reminded me of Robert Bly's Seeing the Eclipse in Maine. The last line in the second stanza and the third read:

. . .
And when the moon had passed partly
through

We saw on a rock underneath a fir tree,
Dozens of crescents --- made the same way ---
Thousands! Even our straw hats produced
A few as we moved them over the bare
granite.

Twenty six, years and a contingent away under different trees, crescents of light.

Mr. Dwyer: Thank you very much for those thoughts, and for the poem by Bly, which is new to me. Yes, those crescents are bound to stay in the memory, aren't they? Quite a gift.

(The Death of Virgil: a book that has been sitting on one of my shelves for years, waiting for me. I went through a Broch period long ago, but never read it.)

Thank you again. I greatly appreciate hearing from you.