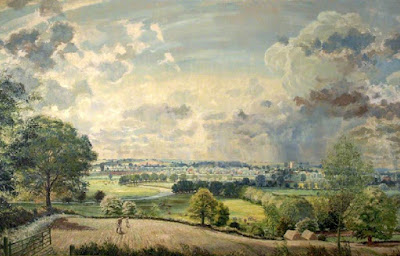 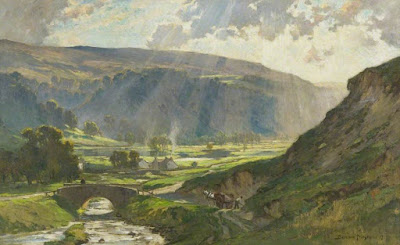 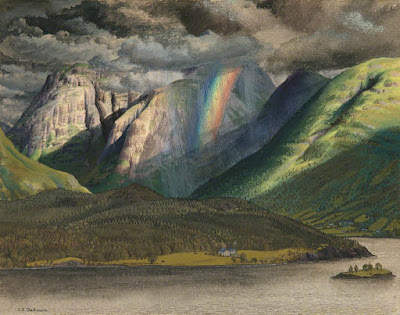 Good morning, sir. It's a rainy morning here in the Blue Ridge Mountains, and cool for August. I'm listening to Gram Parsons "A Song for You" as I write. We have some summer left, but I'm feeling November in my old bones. Your selections for today are perfect. Thank you.

Thank you for your wonder-filled offering. And, as a coda to your suggestion, I offer three cheers for beauty, truth, and Keats! He, by the way, is the subject of my own posting today. And, yes, beauty and truth trump the news and politics in my world too.

Mr. Ireland: It's good to hear from you again. Thank you for the kind words about the post.

Coincidentally, autumn came to mind yesterday when I was out walking: I noticed leaves on the ground in places (perhaps it is only our dry spell out here?), and it seemed to me that the angle of sunlight has begun to change -- slightly, but still a betokening.

As for "A Song for You": I always hesitate to say something is my "favorite," but it is probably my favorite song by him. Emmylou Harris's harmonies are indescribably beautiful (as always). After all these years, his too early death still saddens me. So much lost. But he gave us a great deal.

As ever, thank you very much for stopping by.

R. T.: You're welcome. I'm pleased you liked the post. I will head to Informal Inquiries to see what you have to say about Keats. Thank you very much for visiting again.

Lovely post - I enjoy your blog so much!
I agree wholeheartedly with your emphasis on beauty and truth as we get older - that is all I want now too.

Such a wonderful post Stephen! I realise I knew not a single poem about the Sun.....until reading your post, but can name several about the moon. The Larkin is just wonderful....and the painting of Glencoe. We live not too far from there. The season is changing in Scotland in subtle and wonderful ways, most noticeably the quality of the light. Thank you.

Maggie Emm: Thank you very much for your kind words. As I have said here in the past (this is no great revelation on my part: most of us experience it), one of the nice features of growing older is that you can rid yourself of many things that once seemed important, and appreciate what really matters. Thank you for visiting, and I hope you'll return soon.

Denise: I appreciate your kind words. Thank you.

There is no shortage of poems about the moon, is there? Sun poems are less common, but they can be found. These are three of my favorites. I need to search my memory further, and perhaps I'll add some others in a future post. For instance, I know that George Mackay Brown and Norman MacCaig have written poems about the sun of Scotland.

I have only been to Scotland once, but I can certainly attest to the quality of light there. I will never forget the light and sky on the Isle of Skye in particular: constantly changing, and always breathtaking. Yes, Badmin's painting of Glencoe is lovely, isn't it? I passed through Glencoe on a gloomy, misty afternoon, but it was still beautiful.

Growing older does have its compensations: an unfettering or perhaps a fettering of a different sort. Thank you for calling us to pay attention in ways that remind us who we are.

Mr. Guirl: It's a pleasure to hear from you again. Thank you for stopping by.

"Unfettering" is an excellent description, and your thought that there may be "a fettering [or fetterings] of a different sort" is a good point. In whatever manner the balance plays out in the long run (the end of which is not subject to negotiation), one does begin to focus one's attention, if nothing else, as the years accumulate.

As ever, thank you very much for sharing your thoughts.

This reminds me of a piece that Jacques Barzun quotes from Thoreau's journals, on a phoebe:

"Such an eye was not born when the bird was, but is coeval with the sky it reflects."

It is curious that as you say, one readily thinks of more moon poems than sun poems. There is an unwearying sun in the shield of Achilles, isn't there? Perhaps it is the association of the sun with work and responsibility. I think of Donne's "Busy old fool, unruly sun" or Ovid's Elegy XIII of Book I. Or maybe the Mediterranean peoples just have too much of the sun--Virgil's first eclogue begins with his shepherd under the (dense) shade of a beech tree--and the northerners too much.

George: Thank you very much for those thoughts, and for the quotes from Burckhardt and Thoreau, which are both new to me. Burckhardt's thought is particularly lovely, but both of them appeal to the pantheist in me.

Regarding the sun and poets: as I said in my reply to Ms. Hay's comment, I need to set my memory to work to recollect some additional sun poems. As you know, the sun appears often in the poetry in Wallace Stevens, or so it seems to me. I just checked the concordance to his poetry that appears on the Wallace Stevens Society website and discovered that the word "sun" appears in 233 lines in his poems. I didn't read through the list, but I do recall at least one short paean to the sun by him: "The Brave Man." I need to think about Hardy, Christina Rossetti, and Wordsworth as well.

It's always good to hear from you. Thank you very much for stopping by again.