Edmund Blunden's memoir of life in the trenches - Undertones of War - is, as one might expect, horrific and heart-breaking.  The style of Undertones is interesting: there is no invective or savage satire.  Rather, Blunden's tone is matter-of-fact, and even a bit wry.  And certainly elegiac. But the steady accumulation of exactly-rendered detail and incident is ultimately devastating.  First, a bit of background. 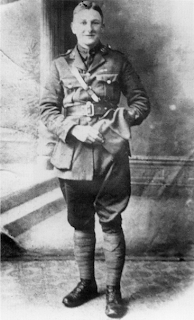 After attending Oxford, Blunden volunteered for the army in 1915.  He was on the front lines with the Royal Sussex Regiment by May of 1916 - at the age of nineteen.  He spent two years on the front.  His nickname in the trenches was "Rabbit."  He was awarded the Military Cross for bravery.

Blunden's method in Undertones is revealed in the following passage:

"Do I loiter too long among little things?  It may be so, but those whom I foresee as my readers will pardon the propensity.  Each circumstance of the British experience that is still with me has ceased for me to be big or little . . . Kenward the corporal and I saw a sentry crouching and peering one way and another like a birdboy in an October storm.  He spoke, grinned and shivered; we passed; and duly the sentry was hit by a shell.  So that in this vicinity a peculiar difficulty would exist for the artist to select the sights, faces, words, incidents, which characterized the time.  The art is rather to collect them, in their original form of incoherence."

Here are two of the "little things" that Blunden remembers:

"Darkness clammy and complete, save for the flames of shells, masked that movement, but one stunted willow tree at which the track changed direction must haunt the memories of some of us.  Trees in the battlefield are already described by Dante."

"Climbing the dirty little road over the steep bank, one immediately entered the land of despair.  Bodies, bodies and their useless gear heaped the gross waste ground; the slimy road was soon only a mud track which passed a whitish tumulus of ruin with lurking entrances, some spikes that had been pine-trees, a bricked cellar or two, and died out. . . . The shell-holes were mostly small lakes of what was no doubt merely rusty water, but had a red and foul semblance of blood.  Paths glistened weakly from tenable point to point.  Of the dead, one was conspicuous.  He was a Scottish soldier, and was kneeling, facing east, so that one could scarcely credit death in him; he was seen at some little distance from the usual tracks, and no one had much time in Thiepval just then for sight-seeing, or burying.  Death could not kneel so, I thought, and approaching I ascertained with a sudden shrivelling of spirit that Death could and did."

Having witnessed these landscapes, it is small wonder that Blunden the poet (and he was primarily a poet throughout his life) would later write these lines in his poem "The Sunlit Vale":

I saw the sunlit vale, and the pastoral fairy-tale;
The sweet and bitter scent of the may drifted by;
And never have I seen such a bright bewildering green,
But it looked like a lie,
Like a kindly meant lie.
Posted by Stephen Pentz at 1:56 PM

"Trees in the battlefield are already described by Dante." Which description do you think Blunden had in mind? The Wood of the Suicides at the start of Inferno 13?? (In the Hollanders' translation, ...we made our way into a forest/not marked by any path./No green leaves, but those of dusky hue -/not a straight branch, but knotted and contorted -/no fruit of any kind, but poisonous thorns.)

Jim: thank you very much for visiting, and for your comment. Your knowledge of Dante far exceeds mine! I wouldn't know where to look. But the passage you mention does sound like a good candidate.