"He Is The Concentration Of All That Is American"

I greatly admire Ulysses S. Grant.  Why?  A first-hand observer of Grant answers that question much more eloquently than I can.  Theodore Lyman served as an aide to Major-General George Meade, commander of the Army of the Potomac.  Grant was in the field with the Army from 1864 until the end of the war.  Lyman saw Grant nearly every day during that period.  In a June 12, 1864, letter to his wife, Lyman wrote of Grant:  "He is the concentration of all that is American."  (George Agassiz (editor), Meade's Headquarters, 1863-1865: Letters of Colonel Theodore Lyman from The Wilderness to Appomattox (1922), page 156.) 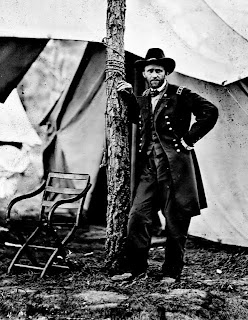 Grant's life is, in some ways, the most remarkable one in American history.  There is no other quite like it.
. . .
People were always looking for visible signs of greatness in Grant.  Most of them saw none and were disappointed. . . . Charles Francis Adams, Jr., grasped immediately the essence of Grant -- that here was an extraordinary man who looked ordinary.  Grant could pass for a "dumpy and slouchy little subaltern," Adams thought, but nobody could watch him without concluding that he was a "remarkable man. . . . in a crisis he is one against whom all around, whether few in number or a great army as here, would instinctively lean.  He is a man of the most exquisite judgment and tact."

As he was dying of cancer, Grant -- in a final act of fortitude and integrity -- wrote his memoirs in order to pay off his debts and to provide for the financial security of his family.  He completed the memoirs less than a week before his death.

Grant begins:  "My family is American, and has been for generations, in all its branches, direct and collateral." 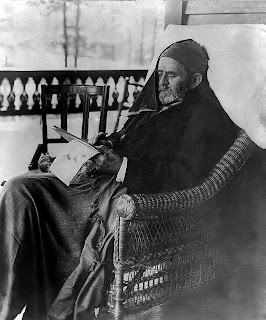 Grant writing his memoirs
Posted by Stephen Pentz at 9:27 AM

This is worth a visit:

Tony: Thank you very much for visiting, and for the link. I was not aware that the cottage is a historic site. The next time that I am back East for one of my Civil War excursions, I'll try to visit it. Thanks again.

My pleasure. I love your site. Thanks for sharing your learning with others.

Thank you very much for the kind words, Tony. As for my alleged "learning," I am afraid that all that I can legitimately lay claim to is aimless, desultory reading, much of which is fading from memory with advancing age!

But I am extremely flattered that you like the blog: my sole goal is to share my enthusiasms, in the hope that others may share them as well. Thank you again.

"Saturday, as 100 people watched, The Friends of Grant Cottage filled the green and yellow Adirondack cottage's porch to recreate the private funeral service held there on Aug. 4, 1885."

Tony: Thank you for visiting again, and for the link to the article on the event staged by The Friends of Grant Cottage. It sounds wonderful. I was delighted to discover that everything has been left the way it was on the day that Grant passed away. And it is indeed heartening to know that there still seems to be a great deal of interest in Grant, and in preserving his memory. As I said previously, I will definitely have to visit Mount McGregor on my next "Civil War trip" back east.