I enjoy the ambition and literary flair of the great British historians of the 19th and early-20th centuries.  I am speaking of the authors of those comprehensive multi-volume works that no one undertakes these days.  To name but a few:  Symonds on the Italian Renaissance, Grote on Greece, Hallam on the Middle Ages, Macaulay on England, Trevelyan on England, Green on England, Froude on England, Carlyle on the French Revolution, Fortescue on the British army.  Their knowledge of their subject matter was complete and their scope was all-encompassing.  Today, we have specialists.

But what makes these historians wonderful is their writing itself.  They thought of themselves as being engaged in a literary undertaking.  Of course, they covered (oh, how they covered) the facts.  However, they were not merely annalists.  They had a story to tell and they told it with style and verve.  Here, for instance, is Charles Oman (1860-1946) writing of the Spanish royal family in A History of the Peninsular War (seven volumes):

It is perhaps necessary to gain some detailed idea of the unpleasant family party at Madrid.  King Charles IV was now a man of sixty years of age: he was so entirely simple and helpless that it is hardly an exaggeration to say that his weakness bordered on imbecility.  His elder brother, Don Philip, was so clearly wanting in intellect that he had to be placed in confinement and excluded from the throne.  It might occur to us that it would have been well for Spain if Charles had followed him to the asylum, if we had not to remember that the crown would then have fallen to Ferdinand of Naples, who if more intelligent was also more morally worthless than his brother.
. . .
[Charles] may be described as a good-natured and benevolent imbecile: he was not cruel or malicious or licentious, or given to extravagant fancies. . . . He was very ugly, not with the fierce clever ugliness of his father Charles III, but in an imbecile fashion, with a frightfully receding forehead, a big nose, and a retreating jaw generally set in a harmless grin. . . . He had just enough brains to be proud of his position as king, and to resent anything that he regarded as an attack on his dignity -- such as the mention of old constitutional rights and privileges, or any allusion to the Cortes.

Some may think that this type of historical writing is too "subjective" or too "romantic."  I respectfully disagree.  To my mind, the writing of history in this fashion follows directly in the tradition of Herodotus, who is well-known for his colorful (and often digressive -- though wonderfully so) style. 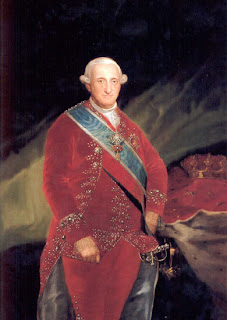