"I'll Chance It, As Old Horne Did His Neck"

The contributors to Notes and Queries -- that repository of out-of-the-way knowledge -- were fond of recording (for the sake of preserving) "English proverbs and proverbial phrases."  We earlier met with "like Morley's ducks, born without a notion."  I am no doubt in a tiny minority in hoping that these chestnuts do not disappear.  You never know when one of them might come in handy.  Thus, I give you "old Horne":

"I'll chance it, as old Horne did his neck," or "as parson Horne did his neck."  Fifty and sixty years ago this was a common saying in the midland counties, and may be now.  I have heard of its being used in Scotland.  Horne was a clergyman in Nottinghamshire.  Horne committed a murder.  He escaped to the Continent.  After many years' residence abroad he determined to return.  In answer to an attempt to dissuade him, and being told he would be hanged if he did, he said, "I'll chance it."  He did return, was tried, condemned, and executed. 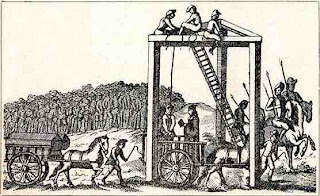 Posted by Stephen Pentz at 5:32 PM