"What Is It That Goes Round And Round The House?"

"Wolves" is one of Louis MacNeice's best-known and most-anthologized poems (it often appears in tandem with "Snow").  MacNeice wrote it in 1934 and it was published in 1935.  Hence, it is often viewed as a reflection of that dark decade and as a prescient view of what was to come.

This may be so.  But treating the poem merely as an artifact of the Thirties (although a particularly fine one) does not do it justice.  After all, the thought of wolves lurking in the dark woods goes far deeper than a specific historical period.  "Grandmother, what big teeth you have!"  And so on. Although MacNeice was certainly preoccupied with the events of his time (his early poetry often has a journalistic feel to it), I think that "Wolves" goes beyond current events.

I do not want to be reflective any more
Envying and despising unreflective things
Finding pathos in dogs and undeveloped handwriting
And young girls doing their hair and all the castles of sand
Flushed by the children's bedtime, level with the shore.

The tide comes in and goes out again, I do not want
To be always stressing either its flux or its permanence,
I do not want to be a tragic or philosophic chorus
But to keep my eye only on the nearer future
And after that let the sea flow over us.

Come then all of you, come closer, form a circle,
Join hands and make believe that joined
Hands will keep away the wolves of water
Who howl along our coast.  And be it assumed
That no one hears them among the talk and laughter. 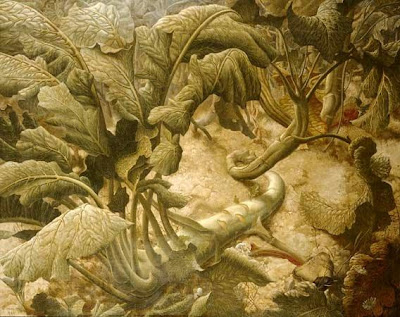 A poem that MacNeice wrote later in his life (in 1958) perhaps echoes what he may have been getting at in "Wolves," but without the historical context.

'What is it that goes round and round the house'
The riddle began.  A wolf, we thought, or a ghost?
Our cold backs turned to the chink in the kitchen shutter,
The range made our small scared faces warm as toast.

But now the cook is dead and the cooking, no doubt, electric,
No room for draught or dream, for child or mouse,
Though we, in another place, still put ourselves the question:
What is it that goes round and round the house? 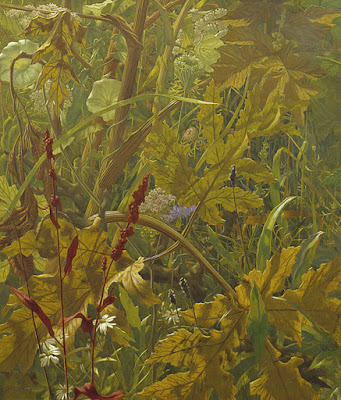 I love MacNeice and 'Wolves' is a great poem. Burying one's head in the sand is a human pastime as old as time.

Another poet unknown to me (not that THAT is difficult!) but those two poems have made me very thoughtful, and I thank you for that. I loved the suggestion of the wolves of water howling along the coast. I think he has never forgotten that childish notion that something is behind the curtain, or under the bed, and if you turn round quickly enough, you may just see the bogey man . . .

I loved the Eliot Hodgkin painting too - it brought to mind memories of the camps we used to make in the bracken and bushes when I was a child, when the leaves above your head are translucent with sunshine and dazzle you.

Ms Aykroyd: thank you for visiting again. I too like "Wolves," although I don't think that I have ever sorted it out -- the tone still puzzles me. I now prefer "The Riddle." This may merely be because I tend to favor MacNeice's later poetry.

Bovey Belle: I'm pleased that I have been able to introduce you to Louis MacNeice's poetry. I have posted a number of his poems, should you wish to explore further. Yes, "the wolves of water/Who howl along our coast" is very nice, isn't it?

I'm glad that you like the paintings by Hodgkin. I came across his work within the past year or so, and I have enjoyed getting to know it.

stephen, inspired by your blog, i started one of my own on blogspot the other day. it's http://www.anj-ruminations-anj.blogspot.com, and i hope i got that right. haven't got much on it yet, but hope to keep noting down my discoveries about life, poetry, teaching, parenting, marriage... wanted to invite you in. i may also seek your advice on the design, as i'm not tech-savvy.

i continue to enjoy your beautiful, reflective blog; it's simply the best one i've ever found.

Ms. Krishna: thank you once again for your kind words. And thank you as well for the link to your blog, which looks very good. As for not being "tech-savvy," I'm afraid that you and I are in the same boat! Fortunately, Blogger makes it pretty easy, otherwise I would never have started.

Thank you again for your thoughtful comments, which I greatly appreciate.

I love "Wolves". For me it is a poem about the trouble that comes with having a sensitive (poetic) disposition. The sensitive person doesn't simply enjoy seeing children making sandcastles on the beach: he feels pathos at the idea that they will be swept away when the tide comes in.

He wishes he could be different, and he could be more instinctive living just for the moment or the immediate future. He toys with the idea of pretending that there are no bad things (or death) out there, but of course this is futile as they are there. Ulimately, no matter how much he pretends, he won't be able to change the way he feels about the world.

Neophyte: thank you very much for your thoughts on "Wolves": they make sense to me, and I think that they apply to aspects of Louis MacNeice's personality very well (as far as I can judge from having read about him). (Although I shouldn't perhaps read too much autobiography into the poem.)

It is one of those poems that changes for me each time that I read it.