One of the delights of reading poetry is unexpectedly coming across a beautiful image and knowing -- as soon as you read it -- that you will never forget it. The image may occur in a poem that is otherwise nondescript. And the poem may have been written by someone who is not a "major" or a "well-known" poet.  These incidentals are of no moment.  The image is what matters.

Such is the case (for me, at least) with the image that appears at the end of the following poem by Mary Webb (1881-1927).  Webb is best known for her novels set in the countryside of Shropshire, but she wrote poetry as well.  The places named in the poem are all in Wales. 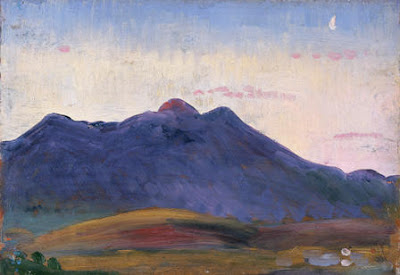 Montgomery's hills are deeply brown,
In Merioneth the sun goes down,
And all along the Land of Lleyn
The spate of night flows darkly in.

Come away to the mountain tree!
Cinnabar-red with fruit is she.
We'll watch the stars, like silver bees,
Fly to their hive beyond the seas.

Sentimental?  Perhaps.  A bit like a fairy tale?  Perhaps.  But the final two lines are beautiful and unforgettable.  (Again, for me, at least.) 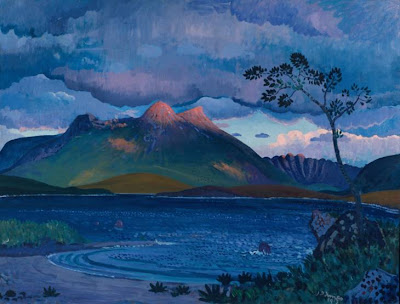 Ah, one I know at last! I have several of her novels and her book of poetry. Her illness focused her mind on the history and folklore she knew, and the beautiful landscape she spent her entire life exploring - although towards the end, only from memory.

Those last lines are beautiful and memorable.

I agree - thank you for making us aware of it. I had never read her poetry but will now seek it out.
Might I also thank you for your wonderful blog? I came across it while preparing to teach a student the poems of Edward Thomas and now regularly return to it for pleasure.

Stephen, something in the paintings and the poems resonates with the moments here, now...i woke up to see just such a moon rising in my bedroom window, as appears in the first painting. and in the other window, facing south, i saw Scorpio shine, like silver bees, and i thought of it travelling across the skies even as we slept. i agree with what you say about finding unforgettable images in poems. i'm on vacation now, and have been spending considerable time going through poetry. reading poetry changes you, and sensitizes you to the subtler aspects of things. i find it also frees up one's use of language, making it possible to juggle together disparate seeming words, to convey one's meaning.

Bovey Belle: thank you for the information about Mary Webb. I have only encountered her poetry in anthologies, and I have not read her novels. I need to explore her work further.

Ms Vass: I greatly appreciate your kind words, and I am pleased that you found your way here.

"The Mountain Tree" was the first poem of Mary Webb's that I encountered, and I plan to explore her work further as well -- as I noted above, I am only familiar with a few of her poems from anthologies.

anj: thank you for visiting again, and for your thoughts. It is nice that the poem and the paintings coincidentally fit in so well with your nighttime sky! Your thoughts about poetry and the use of words are well put: turning stars into bees is a good example, isn't it?

After reading Stephen's comment on Mary Webb's poem I will look again at Fifty-One Poems 1947 edition which I unsuccessfully tried to sell on eBay.uk two months ago. It is illustrated by the wood engravings of Joan Hassall (1906 - 1988) who came to live in Malham, North Yorkshire from London and who became smitten with the landscape. Malham is not far from Bolton Abbey and Barden Moor, already mentioned by Stephen in First Known.

JD Innes painted the most gorgeous little paintings. The National Museum of Wales in Cardiff has a good number but they're rather dimly lit. Otherwise he's practically invisible as an artist, no doubt because he died so young. But in 1912/13 he and Augustus John brought some gypsy glamour to the London gallery scene, with broad-brimmed hats and cloaks and wild tales of life in the Welsh mountains...

"Cinnabar-red with fruit" isn't bad, either!

Yorkshirecatuk: thank you very much for pointing out the wood-engravings by Joan Hassall in Webb's Fifty-one Poems. I am a great admirer of Hassall's work. As you probably know, she also provided wonderful engravings for the 1960 edition of Andrew Young's Collected Poems. (As well as many other books.)

Mr Russell: thanks for visiting again, and for the information on Innes and Augustus John. I see from the Internet that there was a BBC documentary about them last year: "The Mountain That Had To Be Painted." It sounds like it was a lively group!

Shelley: I agree. "Cinnabar" is not a word one encounters often in a poem, is it? And the image Webb comes up with is lovely.