"Continual Conversation With A Silent Man"

In my previous post I made an inadequate and ill-advised attempt to explain what Wallace Stevens's "The Region November" might "mean." Paraphrase and explication are the death of poetry.

Perhaps a better way to approach the poem is through another poem by Stevens.  Once again, we find ourselves bumping up against obdurate, wordless, and emotionless Reality, exemplified this time not by the north wind and the swaying trees, but by "the old brown hen" and "the old blue sky." 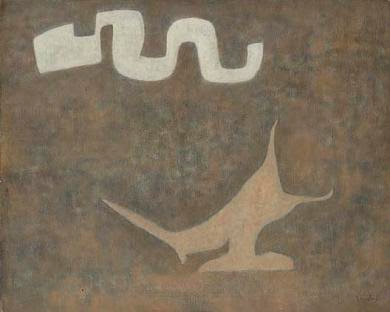 Continual Conversation with a Silent Man

The old brown hen and the old blue sky,
Between the two we live and die --
The broken cartwheel on the hill.

As if, in the presence of the sea,
We dried our nets and mended sail
And talked of never-ending things,

Of the never-ending storm of will,
One will and many wills, and the wind,
Of many meanings in the leaves,

Brought down to one below the eaves,
Link, of that tempest, to the farm,
The chain of the turquoise hen and sky

And the wheel that broke as the cart went by.
It is not a voice that is under the eaves.
It is not speech, the sound we hear

In this conversation, but the sound
Of things and their motion:  the other man,
A turquoise monster moving round. 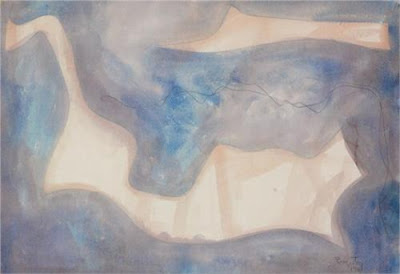 You will not get me to opine on what that means.  I will say that a possible conjunction between this poem and "The Region November" may become apparent in the fifth stanza, when Stevens begins to talk about "voice," "speech," and "sound."  Again, as in "The Region November" (in which the wind and the trees are capable of "saying and saying"), Reality (the World, Nature, whatever you wish to call it) is capable of "conversation."  But this "conversation" is sound without "voice" or "speech."

Yes, I know:  curious, this Stevens fellow, this lawyer and insurance company executive walking around a park in Hartford (Connecticut) during his lunch breaks, looking around, composing odd poems.

A side-note:  Stevens's use of color is often entertaining and light-hearted. Here we have the "brown hen," the "blue sky," the "turquoise hen and sky," and, most mysteriously, "the other man,/A turquoise monster moving round."  I am reminded of the wonderful colors in "A Rabbit as King of the Ghosts":

There was the cat slopping its milk all day,
Fat cat, red tongue, green mind, white milk,
And August the most peaceful month. 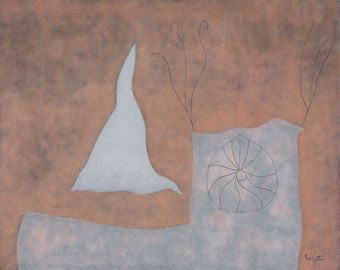 Thank you again for your efforts. Whatever benefit you derive from writing it, mine is greater from reading it. Your site is a momentary refuge in a difficult time (personally that is, not a comment on the current climate), especially when it drives me back to Stevens, Frost, and the Thomases (Edward and R.S.). I'm almost certain you have, but I wonder if you've read Charles Murphy's Wallace Stevens: A Spiritual Poet in a Secular Age? Best wishes for the holiday season. Edward Bauer

Mr Bauer: thank you very much for your kind words. I am always gratified (and flattered) to hear that what I do is appreciated.

Actually, I haven't read Murphy's book, nor had I heard of it. It sounds very interesting, and I will try to track a copy down. I have sometimes thought (this thought is not an original one, but has been raised by others as well) that poetry/the imagination were a substitute for God/gods for Stevens.

There is also a controversy (as you probably know) as to whether Stevens converted to Catholicism in his final days. His daughter Holly hotly denied it, but apparently a priest (who was there) said otherwise. In any event, I certainly agree that Stevens was a spiritual person.

Again, thank you very much. I always appreciate hearing from you.

I am Catholic, and have read about the contested conversion from both sides. (Charles Murphy is a Catholic priest, by the way, who once held an important educational post in Rome.) Whether it happened or not (I don't think it matters in the end), I agree with you that poetry was the path Steven took toward God. My faith tells me that the journey, the pilgrimage back toward God is the thing that truly matters. I once read an Australian Trappist monk who said we must use the journey to build up our momentum, so that at the last moment we can hurl ourselves into God's arms. Stevens seems to have been moving steadily, perhaps speedily, in that direction. Thank you again. Edward Bauer

Mr Bauer: thank you very much for you follow-up comment. You are much more qualified to comment upon the subject than I am! But I agree with you completely: it is the journey that matters.

For some reason, I am put in mind of Wittgenstein. I am no fan whatsoever of Bertrand Russell, but I think that he made one of the truest comments ever made about Wittgenstein (I am paraphrasing from memory): commenting upon the Tractatus, he said that W. was a mystic. I am no expert on W.'s work, but from what I do know, Russell was right. For instance, two of W.'s favorite works were Tolstoy's The Gospel in Brief (which he read while at the front in World War I) and Samuel Johnson's Prayers and Meditations.

I only bring W. up because his life reminds me of your comment about the journey. An added detail (I am on the road, so I cannot summon up my source): I seem to recall that W. once requested that the Catholic rites be read at his funeral. Whether this happened, I don't know. I seem to recall that W.'s "followers" were not enchanted with the idea!