One of my favorite poems about the onset of winter is, well, "The Onset" by Robert Frost.  The poem begins as a sort of echo of "Stopping by Woods on a Snowy Evening" (which appears a few poems prior to it in Frost's 1923 collection New Hampshire):  the speaker is alone "in dark woods" as the snow commences "on a fated night."  But Frost soon heads off in a different direction, as is his wont. 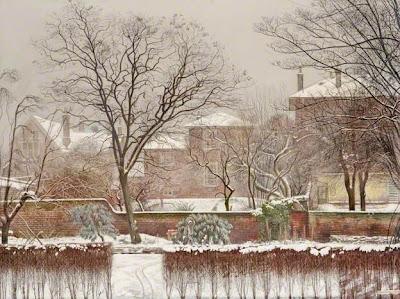 Always the same, when on a fated night
At last the gathered snow lets down as white
As may be in dark woods, and with a song
It shall not make again all winter long
Of hissing on the yet uncovered ground,
I almost stumble looking up and round,
As one who overtaken by the end
Gives up his errand, and lets death descend
Upon him where he is, with nothing done
To evil, no important triumph won,
More than if life had never been begun.

Yet all the precedent is on my side:
I know that winter death has never tried
The earth but it has failed:  the snow may heap
In long storms an undrifted four feet deep
As measured against maple, birch, and oak,
It cannot check the peeper's silver croak;
And I shall see the snow all go down hill
In water of a slender April rill
That flashes tail through last year's withered brake
And dead weeds, like a disappearing snake.
Nothing will be left white but here a birch,
And there a clump of houses with a church.

Frost is always nothing if not exact, and I am certain that many of us can testify from experience that Frost's description of the sound of the falling snow "hissing on the yet uncovered ground" is precise and perfect.  The same goes for "I almost stumble looking up and round."  I imagine that a number of us have done exactly that, whether as a child or as an adult. This is why we have poets and artists, isn't it?  To express that which we all "know," but have not yet been able to articulate.

A side-note:  a "peeper" (line 17) is, according to the OED, "a small tree frog of the genus Hyla; esp. (more fully "spring peeper") a very small, brownish-grey tree frog with a dark cross on the back, Hyla crucifer, of eastern North America, the male of which sings in early spring."  Frost's poem "Hyla Brook" (which may be found in Mountain Interval) contains a further consideration of the peeper. 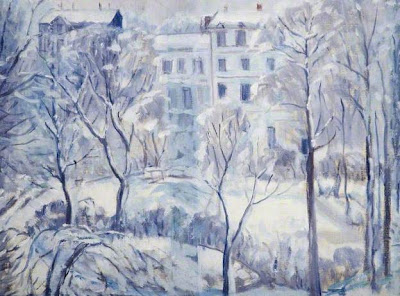 Stephen: Have you ever experienced a nostalgic longing to 'return' to a place you've never seen before? Perhaps the place or scene has never existed - except in the imagination of some writer or painter. That's the sort of uncanny effect Douglas Bliss's painting of an urban garden under snow has on me. I seem to 'recognize' that particular group of houses and those particular trees in the snow and silence of that particular day. I can't explain further; it's too weird.

Studying old photographs (such as those published, for example, in the Shorpy archive) can have a similar effect. One yearns for absolutely private information about the long departed people in them etc.

Frost's beautiful poem is perfectly complemented by your choice of pictures.

Alex: thank you very much for those thoughts. I think that I know what you mean. The aspect of the Bliss painting that creates such feelings for me is not so much the trees and the buildings, but the light that he has captured: it seems that I know it quite well.

As ever, it is always good to hear from you, and I appreciate your kind words.

> Frost is always nothing if not exact

Yes indeed. And so for those who may not know:

"Brake" is short for bracken or bracken fern, a soft fern that grows in dense patches on the woodland floor, and turns into curled up brown paper with the winter frosts, lasting that way until the next year's growth appears in the spring.

Bob: thank you for visiting, and for the information (and the link) about "brake." It is something that we see a fair amount of out here in the Pacific Northwest.

From Sennen Cove a few days ago to Manchester, 1978, and Buzzcocks' Nostalgia ("My future and my past are presently disarranged / And I’m surfing on a wave of nostalgia for an age yet to come..."): http://www.youtube.com/watch?v=ZkF50iY2nDs

Anonymous: well, it has been quite some time since I have thought of the Buzzcocks! And the song does indeed provoke -- what else can I say? -- nostalgia for that year. Although I confess that I was more preoccupied with Elvis Costello at the time -- who arrived in 1977, as I recall.