A year or so ago, I posted Seamus Heaney's "Postscript," which is about an autumn drive "out west/Into County Clare, along the Flaggy Shore."  The poem concludes as follows:

. . . You are neither here nor there,
A hurry through which known and strange things pass
As big soft buffetings come at the car sideways
And catch the heart off guard and blow it open.

The following poem by Charles Tomlinson is also about a drive in autumn, a drive in which the wind again plays a part. 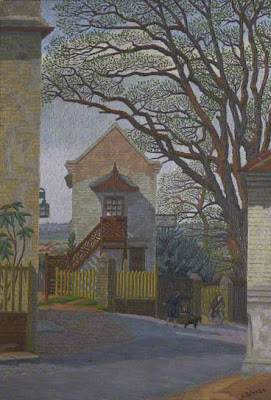 Baffled
by the choreography of the season
the eye could not
with certainty see
whether it was wind
stripping the leaves or
the leaves were struggling to be free:

They came at you
in decaying spirals
plucked flung and regathered by the same
force that was twisting
the scarves of the vapour trails
dragging all certainties out of course:

As the car resisted it
you felt it in either hand
commanding car, tree, sky,
master of chances,
and at a curve was a red
board said 'Danger':
I thought it said dancer. 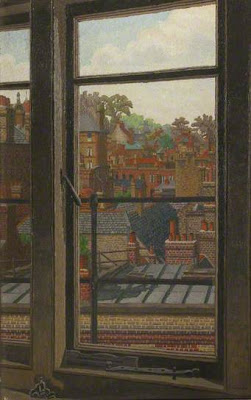 Tomlinson's conflation of "danger" and "dance" puts me in mind of Dorothy Wordsworth's description of a last leaf dancing upon a tree, which I have previously posted here:

"William and I drank tea at Coleridge's. . . . Observed nothing particularly interesting. . . . One only leaf upon the top of a tree -- the sole remaining leaf -- danced round and round like a rag blown by the wind."

Both William Wordsworth and Coleridge were wont to appropriate observations made by Dorothy Wordsworth into their own poetry.  Thus, Coleridge later wrote in "Christabel":

The one red leaf, the last of its clan,
That dances as often as dance it can,
Hanging so light, and hanging so high,
On the topmost twig that looks up at the sky. 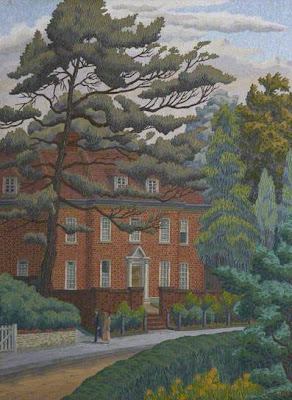 Stephen when visiting Dove Cottage and Grasmere some years ago, I picked up a copy of Dorothy Wordsworth's diary. Its fascinating reading and gives a unique insight into William's process. But what most interested me was her acute eye and influence on her brother's verse,as you wrote. Very interesting about the Coleridge poem and the 'last leaf'
I like her metaphor best about it looking like a rag blown by the wind!

Until I read Juliet Barker's biography of William Wordsworth quite recently, I was only dimly aware of how often he 'borrowed' from and indeed relied upon the observations from nature that Dorothy recorded in her journals.

I suppose the best known example of Wordsworth being inspired by his sister's impressions is the 'source' for the poem, I wandered lonely as a Cloud.

On 15 April 1802, William and Dorothy saw the daffodils along the western shore of Ullswater. Dorothy wrote in her journal: "I never saw daffodils so beautiful they grew among the mossy stones and about them some rested their heads upon these stones for weariness and the rest tossed and reeled and danced and seemed as if they verily laughed with the wind that blew upon them over the lake they looked so gay ever glancing ever changing…" (Dorothy didn't pay much attention to punctuation, apparently.)

According to Juliet Barker, William said the two best lines in the poem were suggested by his wife Mary - to whom he attributed:
They flash upon that inward eye
Which is the bliss of solitude


Some years ago my wife and I went to Ullswater on purpose in early spring hoping to see a host of dancing daffodils. Unfortunately the season was particularly cold that year and the daffodils were late: none had flowered.

Julie: it is good to hear from you again.

I agree: her journals are a delight to read. Coming across the essay by Maurice Hewlett which I referenced in my previous post on her prompted me to explore her writing, which I had not done before. The two of them were a remarkable pair in the years when he was producing his best poetry. It is a shame that she was overcome by mental difficulties later in life.

Alex: thank you for that information about Dorothy Wordsworth and Mary Wordsworth. Barker's biography can be daunting in its comprehensiveness (for me, at least), but I agree that she certainly illuminates what the life of the Wordsworth family was like during those years around the turn of the century -- a very exciting and creative time for them all.

Ah, too bad about your trip to Ullswater for the daffodils. North of Seattle lies the largest tulip and daffodil growing region in the U. S. The growers hold a tulip/daffodil festival each year, but it is always a roll of the dice as to when the flowers will come out in full bloom.

Mr. Pentz: thank you for introducing me to Charles Tomlinson. That poem has become an instant favourite. Poetry about the wind is special for me and when I read it, it transports me to a time in childhood that I can't easily place. Sometimes it's a memory of being in a car, as in the poem, or at home. Either way it's a feeling of delicate and fleeting comfort amid danger. I don't know if you hear a child's voice in the poem. I do, possibly owing to the bafflement and the mix-up of the sign at the end.

Wind, elegant decay and the mysterious forces of the universe: this poem ticks all the boxes for me. I think he does something marvellous in the second stanza. I don't really understand the line "twisting / the scarves of the vapour trails" but it seems to make perfect sense. The word "scarf", especially in the plural, I think, adds to the 'danciness' and helps along the progression.

Anyway, thanks again. It's one to go on the Christmas list.

Daniel: thank you very much for visiting again, and for your comments on "Autumn Piece." I'm pleased to have helped introduce you to Charles Tomlinson.

I see what you mean about how it could evoke childhood memories that might have a feeling of danger to them. As to "twisting/the scarves of the vapour trails": I picture, high in the blue sky, the trails left by jets (on their defined courses to somewhere) turning from straight lines to twists and curves by the winds high in the atmosphere; thus: "dragging all certainties out of course." At least that's one interpretation.

Thank you for posting the Tomlinson poem and the Ginner paintings. Wonderful!

Ms Robson: thank you for visiting, and for your thoughts. I'm glad that you liked the paintings and poems. Please stop by again soon.