It is time, dear readers, to pay our annual visit to "The Region November." This is the fourth time ("Time's winged chariot hurrying near!") the poem has appeared here, for which I beg your indulgence.  But it is my way of greeting the arrival of winter.  I have long felt that, as a matter of emotion, winter begins sometime in the latter half of November, regardless of what the calendar may say.

"The Region November" is coupled in my mind with a poem which I visit in May of each year:  Philip Larkin's "The Trees."  "Swaying, swaying, swaying" (see below) and "afresh, afresh, afresh" provide guideposts for the turnings of the year (two of them, at least).  So please bear with me. 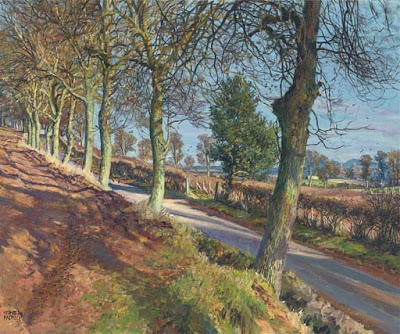 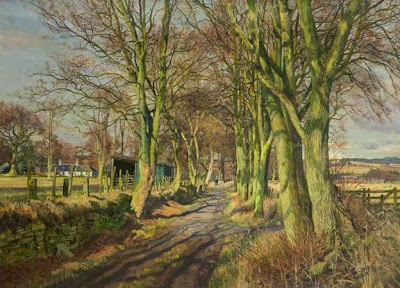 This idea of autumn-into-winter trees "saying and saying" and "swaying, swaying, swaying" brings to mind a poem by Thomas Hardy.  I seldom think of Hardy and Stevens in connection with one another:  they seem to inhabit different worlds, Hardy's being more human and less abstract than Stevens's.  But in these two poems they circle around a similar thought. (And not simply because the word "sway" occurs in both poems.)

Warm yellowy-green
In the blue serene,
How they skip and sway
On this autumn day!
They cannot know
What has happened below, --
That their boughs down there
Are already quite bare,
That their own will be
When a week has passed, --
For they jig as in glee
To this very last.

But no; there lies
At times in their tune
A note that cries
What at first I fear
I did not hear:
"O we remember
At each wind's hollo --
Though life holds yet --
We go hence soon,
For 'tis November;
-- But that you follow
You may forget!"

Hardy has a Dorset countryman's view of things, of course.  Which, to my mind, is a good thing.  However, some might argue that he is not as "sophisticated" as Stevens.  I disagree.  As much as I love "The Region November" (and many other poems by Stevens), no poet has looked as closely at -- and as deeply into -- the World and its denizens as Hardy has.

But enough of these quibbles.  All that matters is this:  Hardy and Stevens both know what November means.  And trees do talk. 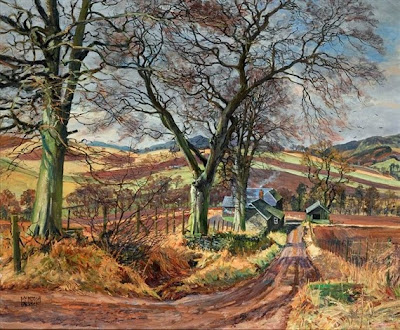 How refreshing to hear you say that Stevens and Hardy are both great poets, to dismiss the hogwash that Hardy is not sophisticated enough to rank with Stevens. "Sophistication," at least when referring to poetry, is perhaps a pejorative term, a suggestion of legerdemain and cleverness taking the place of true insight and poetic skill.

Stevens, as I suspect Hardy did, knew there were many truths, and we can say that more ways than one exist to write a great poem. I admire your frankness is confessing that you can read Hardy and then Stevens and experience no sense of contradiction at all. You know greatness when you see it (I am being a bit vain, if not disingenuous, of course since the truth is your tastes and mine are congruent). Can we not relish Larkin in the morning and then in the afternoon sit down and read Keats--and find both poets to our satisfaction?

My guess, and it's only a guess based on years of reading both poets, is that the sensibilities of both Hardy and Stevens--I mean the way the two poets interpret experience, evaluate the human predicament--are much closer than a superficial examination of their poetry would reveal.

Anonymous: thank you very much for the stimulating thoughts.

I suspect that you and I agree that "unsophisticated" poets such as Hardy (and, in addition, I think, Edward Thomas and Philip Larkin) are given relatively short shrift by critics and academics because critical-academic careers (and their attendant cottage industries) cannot be built around poets who express themselves fairly directly. Why? Because their poetry says what it says without the need for explication and exegesis. (As you may know, William Pritchard wrote an essay about Stevens titled "Poet of the Academy," which ventures into some of this territory.)

But, as you rightly say, Hardy and Stevens are both great poets. Your final point is an intriguing one, and deserves greater thought on my part: their sensibilities may be closer than we suspect.

Those paintings! Oh, he is one of my favourite artists now and I always feel that I can walk along the lanes he has painted . . .

I cannot make erudite comments on the first poem, and Stevens is a new poet to me, but it would seem that like Edward Thomas, he almost sees humanity in the trees and makes a similar connection.

The Hardy poem has made a similar connectivity. I must say, that Birch trees always look very anxious, nervy trees to me (if they were a person, that is!) They shiver and tremble and have such delicate traceries of twigs in the bareness of winter. The idea of them skipping like children made me smile. Living for the day, and about to meet the reality of tomorrow . . .

Bovey Belle: yes, I have become very fond of James McIntosh Patrick's paintings in recent years as well. You do feel that you can walk right into them.

I know what you mean about birches -- aspens as well, of course. And I'm sure that E.T.'s "Aspens" also comes to mind for you: "Over all sorts of weather, men, and times,/Aspens must shake their leaves . . . while they and I have leaves/We cannot other than an aspen be/That ceaselessly, unreasonably grieves."

It's always good to hear from you. Thank you for stopping by again.

Very interesting about Stevens & Hardy. Our son gave me Stevens' "Collected Poems" some years ago, & your blog has been a great help to me in my unequal, but rewarding struggle with them.
I too enjoy walking into the paintings. Maybe someday you could look into poems about roads. At the moment I can only think of the famous Frost one, but ET also has a couple at least & there must be more.
Susan

Susan: thank you for visiting again.

I'm pleased that I may have been of some help with Stevens. He and Hardy are on opposite ends of the accessibility scale, aren't they?

I've been reading Stevens's poetry for over 30 years, but I confess that there are vast expanses of it that still leave me scratching my head in puzzlement. But, as you know, there are certain poems (numbering in the dozens) that make all of the befuddlement more than worthwhile. As you say, it is a "rewarding struggle."

Yes, "roads" would be an excellent subject for an anthology -- and I agree: Frost and ET would provide a good start. I have made a note in my list of possible future posts!