"That Ringed-in Hour Of Pines, Stars, And Dark Eminence"

This week has been clear and cold.  The night sky seems deeper, and the stars seem sharper.  That winter look.  No doubt things seem that way by dint of emotion, not by virtue of scientific fact.

Of course, a streetlight washed city sky is no true test.  I have two benchmarks for star-viewing:  a night camping along the Pacific Crest Trail in the Sierra Nevada of California in the early 1970s, and a night on a beach on Aitutaki in the Cook Islands in the 1980s (where I saw the Southern Cross for the first time).  Skies like that have a way of putting you in your place. 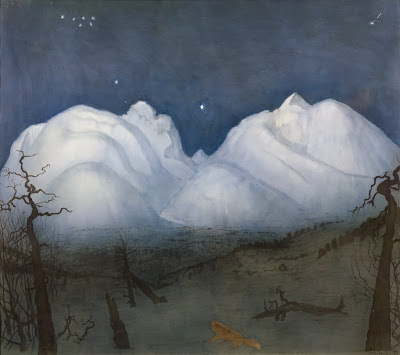 Ivor Gurney was an inveterate night walker.  Hence, the stars make frequent appearances in his poetry (as does dawn, when he was often still walking).

One lucky hour in middle of my tiredness
I came under the pines of the sheer steep
And saw the stars like steady candles gleam
Above and through;  Brimscombe wrapped (past life) in sleep!
Such body weariness and ugliness
Had gone before, such tiredness to come on me --
This perfect moment had such pure clemency
That it my memory has all coloured since,
Forgetting the blackness and pain so driven hence.
And the naked uplands even from bramble free.
That ringed-in hour of pines, stars, and dark eminence.
(The thing we looked for in our fear of France.)

The lines "This perfect moment had such pure clemency/That it my memory has all coloured since" bring to mind similar thoughts from Derek Mahon in "Thinking of Inis Oirr in Cambridge, Mass." ("I clutch the memory still, and I/Have measured everything with it since") and Seamus Heaney in "The Peninsula" (". . . now you will uncode all landscapes/By this: things founded clean on their own shapes,/Water and ground in their extremity"). In the following poem, Thomas Hardy also finds himself alone beneath the stars out in the countryside.  Hardy wrote his fair share of night-poems, many of which are spookily set in graveyards or on windy headlands or in empty Dorset lanes.  But this poem is rather restful and peaceful (albeit with a whisper of Mortality at the end).

There is nobody on the road
But I,
And no beseeming abode
I can try
For shelter, so abroad
I must lie.

The stars feel not far up,
And to be
The lights by which I sup
Glimmeringly,
Set out in a hollow cup
Over me.

They wag as though they were
Panting for joy
Where they shine, above all care,
And annoy,
And demons of despair --
Life's alloy.

Sometimes outside the fence
Feet swing past,
Clock-like, and then go hence,
Till at last
There is a silence, dense,
Deep, and vast.

A wanderer, witch-drawn
To and fro,
To-morrow, at the dawn,
On I go,
And where I rest anon
Do not know!

Yet it's meet -- this bed of hay
And roofless plight;
For there's a house of clay,
My own, quite,
To roof me soon, all day
And all night. 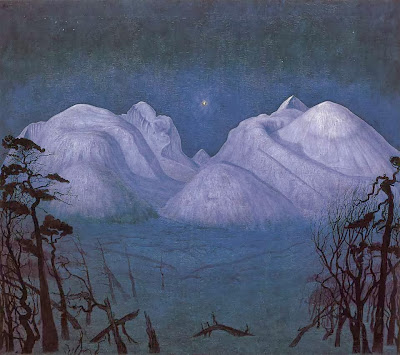 Harald Sohlberg, "Winter Night in the Mountains" (1911)
Posted by Stephen Pentz at 1:10 AM

Clear and very cold here too - especially this morning when the frost drove blood from extremities.

Of course, I had to find Brimscombe in my Road Atlas, and have found it now swallowed up by Stroud. "This perfect moment had such pure clemency" - I wonder, was he forgiving himself? Or perhaps, like the Heaney poem suggests to me, he saw things reduced to the simplest structure and understood them and enjoyed a brief hour of freedom of spirit? I have read it through and through and reach a different conclusion each time!

I have been dipping into Hardy's poetry recently, but this one eluded me. I am sure that in Hardys' time, many such wanderers would be abroad at night, sheltering in a hay barn and hoping for a day's work to help them forwards. I liked: "Sometimes outside the fence, feet swing past" - until no more folk - good or otherwise - are abroad and the wanderer has the night to himself.

Such unusual paintings too - very atmospheric.

Bovey Belle: thank you very much for the thoughts.

Gurney's poems often puzzle me, and I too go back and forth on what they may "mean." Given the reference to France in the final line, I lean toward your second thought. To wit: any hour alive after having survived the War was "pure clemency."

"The Wanderer" is a recent discovery -- there is still so much to find that I haven't gotten to yet. I trust that Hardy may have spent a few nights under the stars himself, in addition, of course, to having often seen wanderers on the road.

I'm pleased that you like Sohlberg's paintings. I'm intrigued by the fact that he returned to the same composition three separate times over the years.

I enjoyed these poems, but this time I particularly wanted to thank you for drawing my attention to Harald Sohlberg's paintings. (I can't remember if I've seen them before, or not - possibly in passing, or while travelling in Scandinavia?)

I absolutely love them - these ones and the others that I looked up!

Ms. Aykroyd: yes, his work is very nice, isn't it? Unfortunately, I haven't seen any of his paintings in person. I discovered him in a book about Scandinavian landscape painting in the 19th and early 20th centuries, and since then have found other works by him on the Internet. One senses the light and atmosphere of those regions in his paintings, I think.