The following poem by Kathleen Raine has its source in a painting by Samuel Palmer.  I'm guessing that the painting she has in mind is the one that appears immediately below.  However, any number of paintings and engravings by Palmer (a few of which have appeared here previously) evoke a similar atmosphere.  My sense of Palmer is that he knew he was witnessing the passing of a world, and that he wished to preserve what he could of it before it vanished. 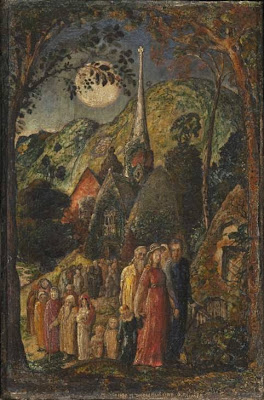 That country spire -- Samuel Palmer knew
What world they entered, who,
Kneeling in English village pew,
Were near those angels whose golden effigies looked down
From Gothic vault or hammer-beam.
Grave sweet ancestral faces
Beheld, Sunday by Sunday, a holy place
Few find, who, pausing now
In empty churches, cannot guess
At those deep simple states of grace.

The poem brings to mind Philip Larkin's "Church Going" and J. L. Carr's A Month in the Country, both of which have a similar elegiac feeling. 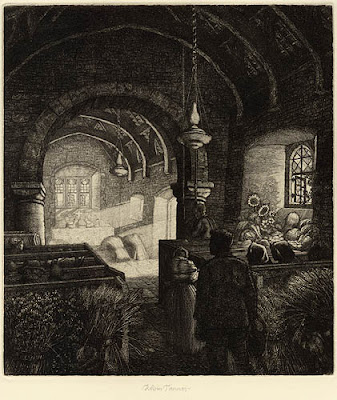 The following poem by Derek Mahon goes well, I think, with Raine's poem.

The chair squeaks in a high wind,
Rain falls from its branches;
The kettle yearns for the mountain,
The soap for the sea.
In a tiny stone church
On a desolate headland
A lost tribe is singing 'Abide With Me'.

Nowadays, the word "nostalgia" has acquired a vaguely pejorative sense. As has the word "sentimental," with which it is often paired.  At least that's my perception.  But perhaps I'm being defensive, since I do not find anything inherently wrong with nostalgia or sentimentality, as long as we realize that the past was not "better" in all respects than the world in which we presently live.  I'm pleased that we now have electricity and plumbing. Beyond that . . .

Of course, there are those who choose to believe that we have "advanced" beyond those lost times and that human history is an unbroken narrative of "progress," as measured in scientific and political terms.  How quaint and beguiling a notion.

"Men have judged that a king can make rain; we say this contradicts all experience.  Today they judge that aeroplanes and the radio etc. are means for the closer contact of peoples and the spread of culture." 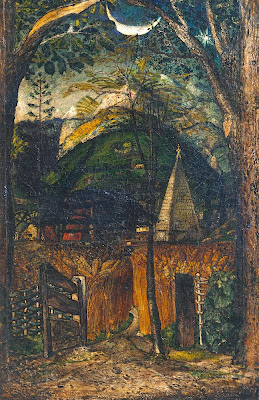 New world, I see you dazzle,
Like the sun on a door-knocker
In a straight street inhabited
By people I do not know. 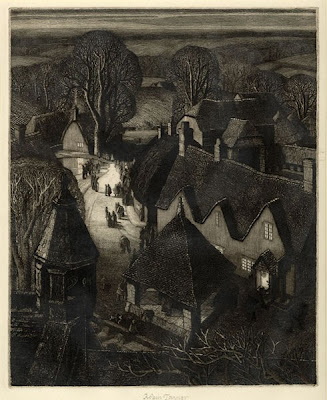 Mr Pentz, the Katherine Raine poem I did'nt know. It is wonderfully done, especially the last three lines, and as I was reading I had J L Carr's, A month in the country in my mind, so obviously did you.I am coincidentally reading a very interesting book about Samuel Palmer at the moment, The paintings of Samuel Palmer by Raymond Lister.
It also reminded me a little of R S Thomas's In a country church.
I agree with you also about the blind faith in progress. The trouble is that so often we " throw the baby out with the bath water" Of course no one would wish a return to the unsanitary and unhygenic conditions of the past, modern plumbing is a wonderful thing, but each time we take a step forward , we too often leave good things behind as well as the bad.
The C H Sisson piece captures well a lot of what's wrong with the modern world very well.

I'm glad you referred to Carr's "A Month in the Country" which is my favourite novel (as Larkin remains my favourite poet).
Nostalgia used to be considered a medical condition and, of course, the etymology is in part from the Greek for pain. I find, particularly as I get older, that it seems to be the natural condition of most of the writers I admire!

I love the quote from Wittgenstein. Despite my German studies background, I know little about him, but from this quote he seems rather droll. I may steal it for my blog sometime, if you don't mind.

Mr Ashton: Raine's poems can be a bit too broadly mystical for me at times (she was a devotee of Blake, and wrote extensively about him), but she is also a fine observer.

It seems that three of us (see Mr Morgan's comment) all had A Month in the Country pop into mind in connection with Raine's poem. A wonderful book -- and a good companion to Ryecroft, which you and I recently talked about.

I agree that Sisson's poem is very nice. He can be so oblique that he loses me sometimes, but I get the general drift most of the time. I do know that he was no huge fan of the modern world.

As always, thanks for stopping by, and for your thoughts.

Mr Morgan: thank you very much for visiting, and for your thoughts.

Yes, A Month of the Country is wonderful, isn't it? Given your knowledge of it, you are probably already aware of Byron Rogers's biography of Carr: The Last Englishman. From it, I learned that Carr was a unique and remarkable person.

"Nostalgia" as a medical condition! I like it. I agree with you completely: I feel that, as I age, nostalgia is coming over me, and is, as you say, causing me to gravitate towards poets and writers who share the same condition. Although I confess that I have been feeling variations on this nostalgia for as long as I can remember.

Goethe Girl: I'm very happy to hear from you again.

Yes, that's a wonderful observation, isn't it? As you know, Wittgenstein was not greatly enamored of the modern world. For more of his thoughts on progress, you may wish to take a look at a past post of mine titled "Wittgenstein and Progress": there is a very fine extended passage there along the same lines.

You are fortunate to be able to read Wittgenstein in German if you wish to. The translations of his thoughts, as I'm sure you know, can vary greatly from one another.

I'm still periodically working my way further into his works. I cannot make head or tail out of much of it. However, he does come up with these aphorism-like comments that get to the heart of things. As you probably know, he was an admirer of Lichtenberg. J. P. Stern wrote a book that you may be aware of: Lichtenberg: A Doctrine of Scattered Occasions. Wittgenstein is discussed in the book, as I recall. I think that much of his writing has an aphoristic quality to it. Not unlike Schopenhauer's work.

Yes, Wittgenstein was quite droll, despite his fearsome reputation. In fact, he can be hilarious. He was an admirable and fascinating man, from what I have been able to learn of him.

I didn't know he was not enamored of the modern world. Maybe that is the Viennese strain. I recall when I was about 18 picking up a copy of the "Tractatus" and coming up against a wall with the first proposition: "Die Welt is alles, was der Fall ist." "The world is everything that is the case": now, what on earth did that mean? "Fall" means "case," as in English, but it struck me that he was speaking of grammatical categories, which are more signiificant in German than in English, "Fall" being the word for noun cases in German (Nominative, Genitive, Dative, and Accusative). After all these years, however, I remain puzzled. Someday perhaps ... Thanks for the other recommendations.

Goethe Girl: thanks for the follow-up thoughts. My favorite Wittgenstein quote on the modern world is: "Our civilization is characterized by the word 'progress.' Progress is its form rather than making progress being one of its features. Typically it constructs. It is occupied with building an ever more complicated structure. And even clarity is sought only as a means to this end, not as an end in itself."

As you may know, W's Philosophical Investigations begins with an epigraph which comes from Johan Nestroy's play Der Schutzling: "The thing about progress is that it appears much greater than it actually is." (This is one translation among many I have seen.) David Stern wrote an interesting paper titled "Nestroy, Augustine, and the Opening of the Philosophical Investigations," which explores the epigraph and W's use of it. It is available on the Internet.