Please bear with me:  I have decided to get these swede poems out of my system.  The two poems that follow have to do with the "docking" of swedes, which consists of cutting away soil and fibers from the harvested root.  The first poem is by Thomas Hardy, and is based upon incidents from Tess of the d'Urbervilles. 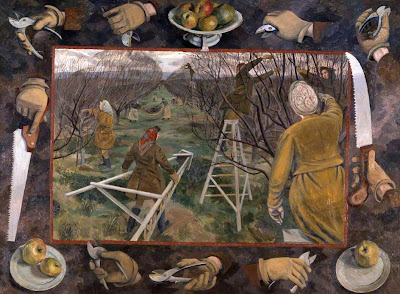 How it rained
When we worked at Flintcomb-Ash,
And could not stand upon the hill
Trimming swedes for the slicing-mill.
The wet washed through us -- plash, plash, plash:
How it rained!

How it snowed
When we crossed from Flintcomb-Ash
To the Great Barn for drawing reed,
Since we could nowise chop a swede. --
Flakes in each doorway and casement-sash:
How it snowed!

How it shone
When we went from Flintcomb-Ash
To start at dairywork once more
In the laughing meads, with cows three-score,
And pails, and songs, and love -- too rash:
How it shone!

Hardy is one of the few poets who, as a man, can successfully write a poem from the point-of-view of a woman, without doing so in a false or patronizing fashion.  (Perhaps, as a man, I am not qualified to opine on the matter.  Hence, I apologize for any presumption.)  In addition to "We Field-Women," I am thinking of, for instance, "Autumn in King's Hintock Park" (an elderly woman raking up leaves) and "The Farm-Woman's Winter" (a woman whose husband has died, leaving her alone on the farm).  And there are many others.  As I have noted before, Hardy had a great deal of empathy with, and compassion for, his fellow human beings (as individuals, not as "humanity" in the abstract).  This may account for his ability to place himself into another person's shoes.

The scenes depicted in "We Field-Women" seem positively bucolic in comparison with the less-than-idyllic Welsh drama of the following poem by R. S. Thomas.  Hardy is often (rightly and wrongly) accused of being a pessimist.  But Thomas can make Hardy look like an innocent Pollyanna daydreaming of rural arcadias.

There was Dai Puw.  He was no good.
They put him in the fields to dock swedes,
And took the knife from him, when he came home
At late evening with a grin
Like the slash of a knife on his face.

There was Llew Puw, and he was no good.
Every evening after the ploughing
With the big tractor he would sit in his chair,
And stare into the tangled fire garden,
Opening his slow lips like a snail.

There was Huw Puw, too.  What shall I say?
I have heard him whistling in the hedges
On and on, as though winter
Would never again leave those fields,
And all the trees were deformed.

And lastly there was the girl:
Beauty under some spell of the beast.
Her pale face was the lantern
By which they read in life's dark book
The shrill sentence:  God is love.

Whew!  Now, I believe that the caricature of R. S. Thomas as a curmudgeon is overdone.  That being said, I suspect that some of his Welsh parishioners may have found him to be a less-than-outgoing and less-than-warm vicar.  On the other hand, I also suspect that Thomas was truthful to what he saw.  And we must not forget that his Wales is also marked by moments of transcendent beauty.

Mr Pentz, both today's and your previous post resonated with me, as I myself have recently been pulling swedes from my own vegetable plot and on one occasion in particularly heavy rain.
"How it rained" is superb. I think you are right when you say that he is one of the few writers who can write believably from the point of view of a woman.( Being also a man ,I apologise for any presumption I may make.)

I agree with you that the curmudgeonly R S Thomas is often overdone .I remember reading a piece by a journalist some while ago who described him as "the loneliest man I ever met". I think when you have a vision of the world like Thomas that as you say' was truthful to what he saw', it is unlikely to enamour you to many people. For me he is sill an astonishing writer, and there are both moments of great beauty in his poetry, as well as an acute understanding of the pain and difficulty of individual lives.

Mr Ashton: I agree with you about Thomas. Although he was harsh and unsparing, which can make his poetry seem uninviting at times (one doesn't necessarily come to him for solace), I admire his honesty. He was always true to his vision, which I greatly respect. As you say, his sort of truthfulness is not likely to "enamour [him] to many people." But, as I recall you remarking about him previously, his honesty, though harsh, is what makes his poetry valuable.

Yes, it is time to be pulling up the swedes -- I don't know how it is over there, but we have had freezes the past few nights.

As always, it is good to hear from you. Thank you for stopping by.

Aha! Two poems I know well. Flintcombe Ash I know too - I used to drive close by on my way to the Doctor's when I lived in the Piddle Valley. (It was based on a farm at Alton Pancras). Poor Tess, hands blue with cold, eyebrows shaved off making her "look like a mummet" but at least unattractive to - and safe from - men. I saw her every time, in my mind's eye.

My children used to recite the R S Thomas poem at school, and would come home and chant, ever louder, "There was Huw Puw TOO!!!" His use of words conjures up the faces and idiosyncracies wonderfully - "Opening his slow lips like a snail." I hear an echo of Dylan Thomas there. I must away and read more of his work.

Thank you for sharing.

Bovey Belle: schoolchildren reciting "Huw Puw, too": wonderful! I would never have thought that that poem would work its way into the curriculum! That's a great anecdote.

You are fortunate to have lived in Hardy Country. It would be nice to see the landscapes of the poems and the novels on a daily basis, and to live in both a real and an imagined world.