Given that I am residing in a Mediterranean, classical Greek daydream world at the moment (courtesy of The Greek Anthology), a visit to C. P. Cavafy is appropriate.  Cavafy's entire body of work is a dreamy amalgam of the ancient Alexandrian-Grecian-Roman-Mediterranean world and the less-than-enchanted (well, somewhat tawdry) modern world, so it is hard to choose where to begin.

The following poem captures, for me at least, Cavafy's old-in-new world. I've posted it here previously (in three different translations), but I'm not averse to circling back when the mood strikes.  As I have noted before, Cavafy has a marvelous knack for intermingling the ancient and the modern.  If you surrender to him, you may find yourself wondering where you are.  Here?  Alexandria in the age of the Ptolemies?  Or perhaps on a hillside on the golden coast of vanished Ionia, looking out over the Aegean Sea.

That we've broken their statues,
that we've driven them out of their temples,
doesn't mean at all that the gods are dead.
O land of Ionia, they're still in love with you,
their souls still keep your memory.
When an August dawn wakes over you,
your atmosphere is potent with their life,
and sometimes a young ethereal figure,
indistinct, in rapid flight,
wings across your hills. 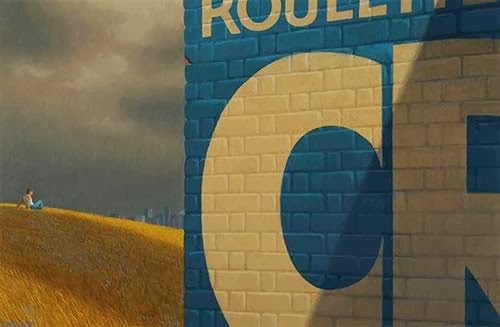 Bernard Spencer is also very good at this intertwining of the ancient and the modern.  Wherever Spencer lived or visited, he unerringly divined the essence of the place, including the echoing revenants of its history.

Delicate grasses blowing in the wind,
grass out of cracks among tiered seats of stone
where a Greek theatre swarmed with audience,
till Time's door shut upon
the stir, the eloquence.

A hawk waiting above the enormous plain,
lying upon the nothing of the air,
a hawk who turns at some sky-wave or lull
this way, and after there
as dial needles prowl.

Cool water jetting from a drinking fountain
in crag-lands, miles from any peopled spot,
year upon year with its indifferent flow;
sound that is and is not;
the wet stone trodden low.

There is no name for such strong liberation;
I drift their way; I need what their world lends;
then, chilled by one thought further still than those,
I swerve towards life and friends
before the trap-fangs close.

Bernard Spencer, With Luck Lasting (1963).  When first published in Spencer's The Twist in the Plotting in 1960, the poem was titled "Feathery Grasses," and it began:  "Feathery grasses blowing in the wind."

Spencer said this of the poem:

"After crossing the plain [of Anatolia] we drove over the mountains to look at the remains of some ancient Greek towns on the south coast of Turkey. These towns, although overgrown with grass and weeds, often have recognizable remains of temples and theatres standing, with their semi-circular tiers of stone seats.  So much emptiness and all those ruins put me in a state of melancholy excitement.  I was half-attracted by it and half afraid . . .What is the trap?  What was I afraid of?  Later, at his request, I read the poem out to John Betjeman, and he cried out 'Oh!  Eternity!'  That is as good an answer as any."

Thus, "Delicate Grasses" is likely set in one of the regions known to the ancient Greeks as Caria (birthplace of Herodotus), Lycia, or Pamphylia. Ionia, the setting of Cavafy's poem, is immediately to the north of Caria. Ionia and Caria lie along the Aegean Sea. 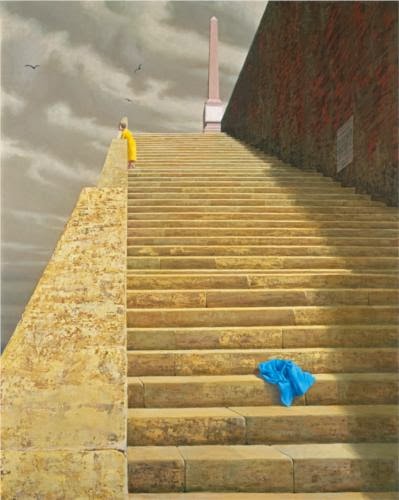 Jeffrey Smart, "The Steps"
Posted by Stephen Pentz at 1:30 AM

I don't know if you ever read literary-travel writing, Stephen, but if so, I warmly recommend Freya Stark's book "Ionia: A Quest." She has a rare quality that sometimes reminds me of Sir Thomas Browne (and that is a compliment).

The greatest of the Ionian cities in the 6th century, when Athens was still a backwater, was Miletus, the commercial and intellectual capital of the early Greek world. Had Miletus survived, Athens might have remained a backwater, but it was destroyed by the Persians in 484 B.C. Or at least it was materially destroyed; Freya Stark, on visiting the ruins, thought the best part of it still lived:

"Miletus herself had survived her defeats and brought victoriously to port an argosy richer than any that her ships had carried, a history safely landed from the histories that went before it, neolithic and bronze—landed in spite of the Persians, into the Future,—into the waiting arms of Athens and Augustine and Dante, Stratford and Rome.

"The real Miletus, invisible and bright and separate from its ruin, appeared to me as a bridge where the heirs of the most ancient Mediterranean were passing safely to our side.… The Persians could now dig away as they liked at our bridge of Miletus, setting their engines to separate them from a world already ancient in their day. When the bridge fell, the discovery of the infinity of man and his universe was safely on our side: Pythagoras and Empedocles, Athens and Rome, the Fathers of the Church and the philosophers, even to the dividers of the atom, were waiting in their turn to receive and transmute it: and we have ever felt that the only thing that matters had become safely ours."

Bob: thank you very much for calling Freya Stark's Ionia: A Quest to my attention. The passage that you quote from it is wonderful. I haven't read anything by her, but now I will start with Ionia.

As a result of your suggestion, I found a copy of it in the Internet Archive. As soon as I saw the first sentence of her acknowledgements at the start of the book, I knew it would be my cup of tea: "The author's thanks are first due to Herodotus . . ."

I thereafter discovered -- as you already know -- that Ionia is part of a trilogy about the Greek provinces in that part of the world. Thus, I will be tracking down The Lycian Shore and Alexander's Path: From Caria to Cilicia as well.