Bernard Spencer (who I have previously identified as a "neglected poet") spent a great deal of time in the Mediterranean as an employee of the British Council, and became stranded in Egypt during the Second World War.  His poems about the region -- first Greece, then to Egypt and other parts of the Middle East, and later to Spain -- are lovely and evocative. 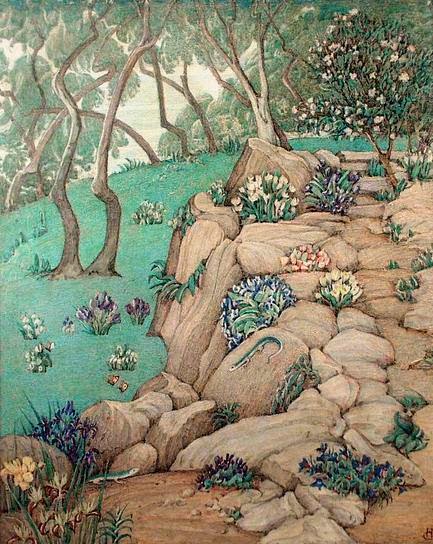 Where white stares, smokes or breaks,
Thread white, white of plaster and of foam,
Where sea like a wall falls;
Ribbed, lionish coast,
The stony islands which blow into my mind
More often than I imagine my grassy home;

To sun one's bones beside the
Explosive, crushed-blue, nostril-opening sea
(The weaving sea, splintered with sails and foam,
Familiar of famous and deserted harbours,
Of coins with dolphins on and fallen pillars.)

To know the gear and skill of sailing,
The drenching race for home and the sail-white houses,
Stories of Turks and smoky ikons,
Cry of the bagpipe, treading
Of the peasant dancers;

The dark bread
The island wine and the sweet dishes;
All these were elements in a happiness
More distant now than any date like '40,
A. D. or B. C., ever can express.

The "grassy home" (line 6) to which Spencer refers is England. 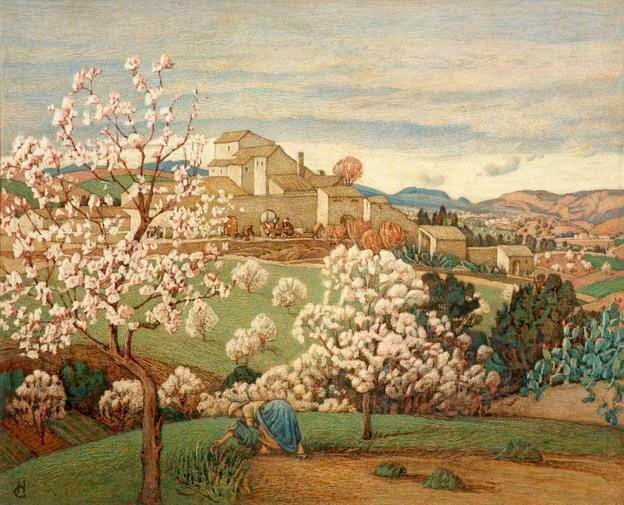 The dour thing in olive trees
is that their trunks are stooped like never dying crones,
and they camp where roads climb, and drink with dust and stones.

The pleasant thing is how in the heat
their plumage brushes the sight with a bird's-wing feeling:
and perhaps the gold of their oil is mild with dreams of healing.

The cold thing is how they were
there at the start of us; and one grey look surveyed
the builder imagining the city, the historian with his spade.

The warm thing is that they are
first promise of the South to waking travellers:
of the peacock sea, and the islands and their boulder-lumbered spurs.

"The dour thing . . . The pleasant thing . . . The cold thing . . . The warm thing . . ." is a nice back-and-forth progression.  And Spencer captures the telescoping of Time -- with the olive tree as a constant and as a mute witness -- very well:  ". . . and one grey look surveyed/the builder imagining the city, the historian with his spade."

I spent my teenage years in a part of California where wild peacocks roamed the dry hills.  I remember the brilliant, ever-turning blues of their heads and bodies and tails.  (And the sound of their screams!)  Thus, I think Spencer's "the peacock sea" is exactly right. 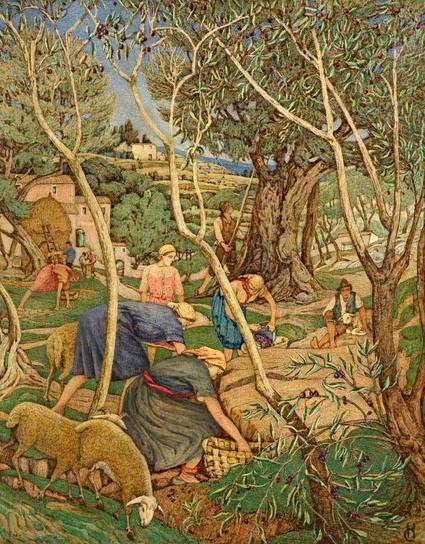 Mr Pentz, Thank you for posting some of Bernard Spencer's poems here. Like yourself I've always cosidered him rather unfairly neglected too.
Having visited a few of the Aegean islands myself I particularly like the first poem, the opening four lines are lovely as are the first three lines of the second piece. It brought to mind walking in the hills and among olive groves on the island of Paxos some years ago. Thank you.

That other Eastward-looking Englishman, James Elroy Flecker, also has some underappreciated Mediterranean poems:

I have seen old ships sail like swans asleep
Beyond the village which men still call Tyre,
With leaden age o’ercargoed, dipping deep
For Famagusta and the hidden sun
That rings black Cyprus with a lake of fire;
And all those ships were certainly so old
Who knows how oft with squat and noisy gun,
Questing brown slaves or Syrian oranges,
The pirate Genoese
Hell-raked them till they rolled
Blood, water, fruit and corpses up the hold.
But now through friendly seas they softly run,
Painted the mid-sea blue or shore-sea green,
Still patterned with the vine and grapes in gold.

But I have seen,
Pointing her shapely shadows from the dawn
An image tumbled on a rose-swept bay,
A drowsy ship of some yet older day;
And, wonder’s breath indrawn,
Thought I—who knows—who knows—but in that same
(Fished up beyond Aeaea, patched up new
—Stern painted brighter blue—)
That talkative, bald-headed seaman came
(Twelve patient comrades sweating at the oar)
From Troy’s doom-crimson shore,
And with great lies about his wooden horse
Set the crew laughing, and forgot his course.

It was so old a ship—who knows, who knows?
—And yet so beautiful, I watched in vain
To see the mast burst open with a rose,
And the whole deck put on its leaves again.

Mr Ashton: yes, I've been feeling that I've been neglecting him as well the past few years! Hence, I returned to him this week, and have been castigating myself for having been away for so long. He really does have a wonderful ability to capture the feeling of all of the places that he lived in -- even, for example, Vienna, where he was at the time of his death.

As always, thank you for your thoughts. I hope the rains have stopped and the waters are receding . . .

Bob: thank you very much for Flecker's poem, which is one of my favorites by him. I'm sure you are also put in mind of "A Ship, An Isle, A Sickle Moon" -- another poem that, for me at least, evokes the Mediterranean and the east.

I hadn't thought of Spencer and Flecker in connection with one another, but they did share a penchant for wandering in that part of the world, didn't they? Thank you for linking them.

Thank you very much for visiting again, and for "The Old Ships," which I hadn't read in quite a while.

Mr Pentz, thank you for your kind and considerate thoughts regarding the rainfall we've been experiencing over here. We have now had four consecutive days of dry weather,at least here in the south of the country, very Spring like and mild, many daffodils already in full bloom. The floodwaters are slowly receding. I am going away to Norfolk in two weeks time to explore some of the remaining ancient woodlands, so I shall be hoping for this early Spring to continue.

Mr Ashton: thank you for the follow-up comment. Well, an early Spring is a nice side-benefit, even if it does not entirely erase the memory of the floods! I hope you enjoy your time in Norfolk.