A Thrush In Spring: "It Strikes Like Lightnings To Hear Him Sing"

If one goes in search of a poem about a thrush in Spring, it is not likely that one will turn first to the poetry of Philip Larkin.  Edward Thomas, John Clare, or Andrew Young, yes, but not Larkin.  But beware:  as I have noted before, we mustn't be taken in by the popular caricature of Larkin (a caricature he helped to create as a trap for lazy journalists and critics).

Here, then, is Philip Larkin's thrush in near-Spring.  Of course, that other Larkin (the one we know and love) makes an appearance as well.

On longer evenings,
Light, chill and yellow,
Bathes the serene
Foreheads of houses.
A thrush sings,
Laurel-surrounded
In the deep bare garden,
Its fresh-peeled voice
Astonishing the brickwork.
It will be spring soon,
It will be spring soon --
And I, whose childhood
Is a forgotten boredom,
Feel like a child
Who comes on a scene
Of adult reconciling,
And can understand nothing
But the unusual laughter,
And starts to be happy.

This poem encapsulates the genius of Larkin:  beauty and human truth side-by-side.  First, a lovely lyrical passage (which sounds vaguely like something a poet of the Nineties (e.g., Arthur Symons or Ernest Dowson) might have written).  Next, a beautiful turning point:  "It will be spring soon,/It will be bring soon."  A "nature poet" would stop there.  But not Larkin, because what makes him unique is his interest in human beings, and how they make their way through the world.  This statement goes against the commonly-accepted caricature of Larkin, I know.  But it is true.

I suspect that most of us have come upon the type of scene described by Larkin in the second half of the poem.  We know exactly how that experience feels, even if we cannot put it into words.  Larkin's poetry is full of shared human experiences that we often find difficult to put into words.

But here is where Larkin's genius lies:  he takes this shared human feeling and links it to the feeling of hearing the first thrush of Spring.  In the yellow light of evening.  In a still-bare garden.  From that link, the poem folds inward and unfolds outward, and the two scenes -- and the emotions associated with each -- play off each other endlessly.  This movement occurs time and time again in Larkin's poetry. 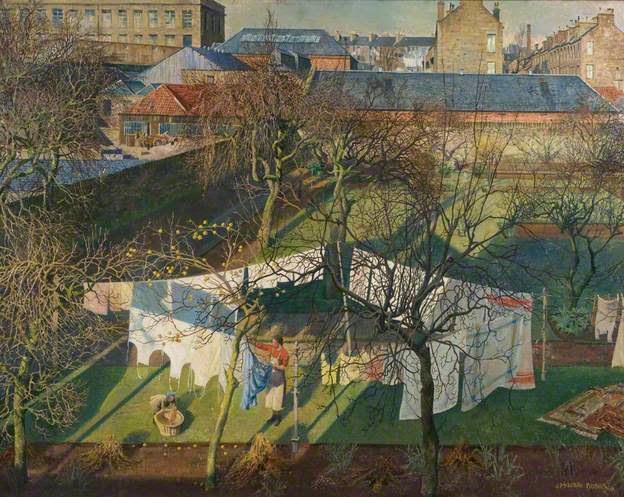 Now, seemingly a world away from Larkin (but not really), here is Gerard Manley Hopkins.

Nothing is so beautiful as Spring --
When weeds, in wheels, shoot long and lovely and lush;
Thrush's eggs look little low heavens, and thrush
Through the echoing timber does so rinse and wring
The ear, it strikes like lightnings to hear him sing;
The glassy peartree leaves and blooms, they brush
The descending blue; that blue is all in a rush
With richness; the racing lambs too have fair their fling.

What is all this juice and all this joy?
A strain of the earth's sweet being in the beginning
In Eden garden. -- Have, get, before it cloy,

Before it cloud, Christ, lord, and sour with sinning,
Innocent mind and Mayday in girl and boy,
Most, O maid's child, thy choice and worthy the winning.

It has been suggested that Ivor Gurney was influenced by Hopkins's poetry. On the evidence of this sonnet, I would agree:  the onrush of words and images and the slightly odd syntax are very similar in both poets.  For just one example, compare "Spring" with Gurney's "The Cloud." 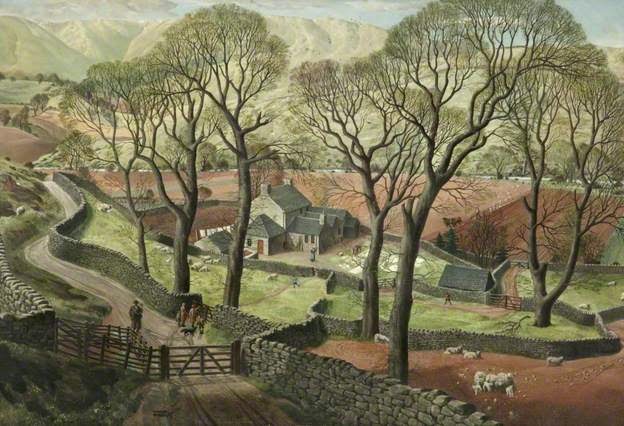 Four blue stones in this thrush's nest
I leave, content to make the best
Of turquoise, lapis lazuli
Or for that matter of the whole blue sky. 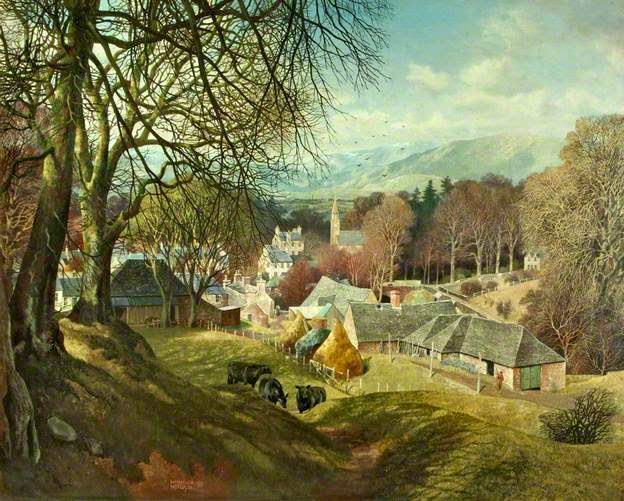 Mr Pentz, this is for your information. On BBC 4 this evening a documentary is being shown about Ivor Gurney, the first ever to my knowledge. I have no idea if you are able to access BBC television programmes from where you live, but if you can I thought you might be interested.
In a second hand bookshop I recently came upon a beautiful edition of Andrew Young's collected poems with beautiful engravings by Joan Hassall which I bought for myself. The Larkin poem I did'nt know and like very much. I must spend more time with him.
Thank you for another wonderul post.

I wonder if that's Hardy's thrush from his poem "The Darkling Thrush."

At once a voice arose among
…..The bleak twigs overhead
In a full-hearted evensong
…..Of joy illimited;
An aged thrush, frail, gaunt, and small
…..In blast-beruffled plume,
Had chosen thus to fling his soul
…..Upon the growing gloom.

I must tell you that our English spring this year is the spring of James McIntosh Patrick's paintings: washing-out sunny, wrap-up windy, new-lamb green. There are daffodils in the churchyards and crocuses in the London parks. It is a spring to gladden your heart after the winter storms.

Mr Ashton: thank you for pointing out the Gurney documentary. Unfortunately, it cannot be accessed outside of the UK. However, it may eventually be available on the BBC radio "iPlayer" (whatever that is), so I will check there.

You found the same edition of Young's Collected Poems that I have. I agree that Hassall's engravings are lovely, and go together well with the poems. I'm glad you came across it.

As for "Coming," it is not one of Larkin's better known (notorious?) poems, so it doesn't receive much attention. He has quite a few of these small poems that have gone unnoticed, but that perhaps show another aspect of his work.

Fred: Perfect! It had escaped my mind completely. It is one of Hardy's most moving poems, I think.

Thank you very much for pointing Hardy's thrush out. As always, it is good to hear from you.

alice c: thank you very much for that poetic description of your fine English spring! This is the way things go, isn't it? Sunlight and storm, storm and sunlight . . .

McIntosh Patrick does capture the atmosphere and the light and the feel of it wonderfully, doesn't he? These three paintings are probably my favorites by him.

"The Darkling Thrush" is also one of my favorite Hardy poems. It suggests all is not doom and gloom with him.

Fred: I agree. Hardy often falls victim to the same caricatures that Larkin does: "gloomy, pessimistic, et cetera . . ." Reading them disproves the caricatures.

I guess it's easy to put writers in box and then leave them there for future reference.

Another poet-essayist-anthropoologist who's also put in the bleak, gloomy box is Loren Eiseley, one of my favorite writers. I've posted some of his poems and excerpts from his writings on the blog. He has his moments as does Hardy, but there are joyful moments also which many commentators don't see, or ignore.

Fred: thank you for recommending Eiseley. I'm sorry to say that I haven't read anything by him except for a poem titled "Gravely Then," which is headed: "For Edward Thomas, 1878-1917." It is a lovely poem, and it made me want to read more of Eiseley's poetry and other work, but I have never gotten around to it. I will try to do so.

As always, thanks for your thoughts.

For starters, I would recommend Loren Eiseley's _The Immense Journey_. It's the first one I read, and I joined a book club simply because its advertisement included a paragraph from that work. I had never heard of him, but that paragraph was so striking that I had to read the book.

Eiseley has several books of poetry out, but the only one I've read so far is _Another Kind of Autumn_. I have posted several excerpts from Eiseley's works and several poems on my blog.

Fred: thanks for the recommendations. I will try to start with those.