"An Atlantic High Prince Of Vapour . . . A True Monarch Of Air"

One might expect Ivor Gurney to have it in him to write a visionary poem about a single cloud.  And, sure enough, he did.  Yet Gurney's states of exaltation are nearly always firmly rooted in the here-and-now.  One has the sense that, whatever his verbal flights, Gurney's feet are in the dirt -- and he never forgets this fact.

It is a bright day in May.  A man is out walking alone in the English countryside.  He is hot and parched.  He thinks of water.  Then, after a sudden shadow passes, he looks up into the sky. 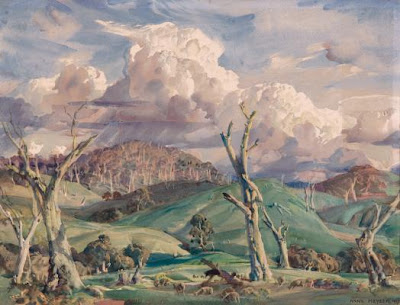 One could not see or think, the heat overcame one,
With a dazzle of square road to challenge and blind one,
No water was there, cow parsley the only flower
Of all May's garland this torrid before-summer hour,
And but one ploughman to break ten miles of solitariness.
No water, water to drink, stare at, the lovely clean grained one.

Where like a falcon on prey, shadow flung downward
Solid as gun-metal, the eyes sprang sunward
To salute the silver radiance of an Atlantic high
Prince of vapour required of the retinue
Continual changing of the outer-sea's flooding sun
Cloud royal, born called and ordered to domination,
Spring called him out of his tent in the azure of pleasure,
He girt his nobleness -- and in slow pace went onward
A true monarch of air chosen to service and station;
And directed on duties of patrolling the considered blue.
But what his course required being fulfilled, what fancy
Of beyond-imagination did his power escape to
With raiment of blown silver. . . .

The ellipses at the end of the poem appear in the original.  "The considered blue" (line 16) has always puzzled me, but perhaps Gurney has in mind the sense "held in consideration or regard, respected."  OED.  "The azure of pleasure" (line 13) is very nice. 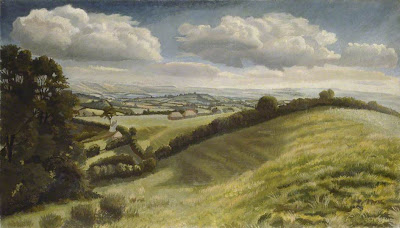