Ah, well!  We are now under the spell of autumn.  The season of joyous melancholy and melancholic joyousness is upon us.  Where does one begin?

"The scent is that of wood-smoke, of fruit and of some fallen leaves.  This is the beginning of the pageant of autumn, of that gradual pompous dying which has no parallel in human life, yet draws us to it with sure bonds.  It is a dying of the flesh, and we see it pass through a kind of beauty which we can only call spiritual, of so high and inaccessible a strangeness is it.  The sight of such perfection as is many times achieved before the end awakens the never more than lightly sleeping human desire of permanence.  Now, now is the hour; let things be thus; thus for ever; there is nothing further to be thought of; let these remain.  And yet we have a premonition that remain they must not for more than a little while."

The final three sentences bring to mind some lines from Wallace Stevens's "This Solitude of Cataracts," a poem that is (at least partially) about the "lightly sleeping human desire of permanence."

He wanted to feel the same way over and over.

Under the buttonwoods, beneath a moon nailed fast. 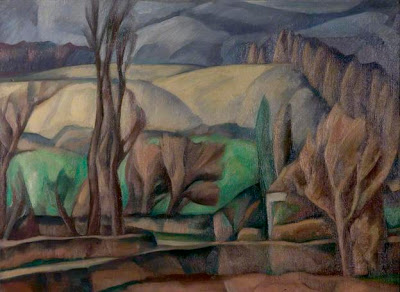 Yellow tunnels under the trees, long avenues
Long as the whole of time:
A single aimless man
Carries a black garden broom.
He is too far to hear him
Wading through the leaves, down autumn
Tunnels, under yellow leaves, long avenues. 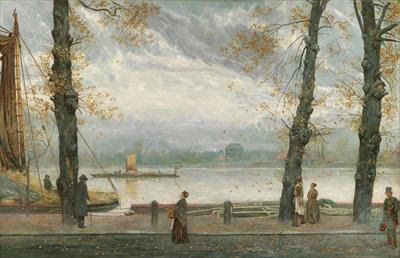 Those autumn scents that Thomas mentions always feel so much like a hand on the shoulder to me --like the Earth is trying to remind us that it lives and breathes. Great stuff. I love Stevens.

Mr. Matarazzo: thank you for stopping by again, and for your thoughts about autumn. One of my lasting memories of growing up in Minnesota is the sight and sound and smell of piles of burning leaves -- an activity which has now, in our "modern" age, gone the way of the dodo. I long for the benighted, unregulated days of yesteryear, I'm afraid.