Life As A Work Of Art, Part Five: "Grand Opera"

I have a confession to make.  A confession that does not reflect well on me at all.  Here it is:  I have never been able to develop an appreciation for opera.

For this bit of cultural ignorance, I beg the indulgence of any readers who are fond of the art form.  The fault is all mine.  I realize that there are opera devotees who will travel the globe to experience the latest version of The Ring Cycle in Bayreuth.  I can only envy them their good taste and their passion.  I, however, fell asleep during the last opera that I attended (Die Meistersinger von Nurnberg, a couple of decades ago). 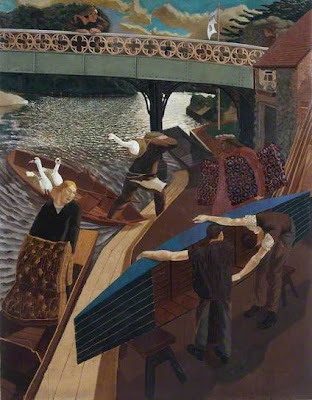 To demonstrate the depths of cultural depravity to which I have sunk, I shamefacedly admit that the opening lines of a song that I have been listening to off and on for over 40 years still give me a thrill each time I hear them:  "They're selling postcards of the hanging/They're painting the passports brown/The beauty parlor is filled with sailors/The circus is in town."  In contrast, the sublimest moments of opera leave me cold.  (An aside which further demonstrates my Philistinism:  when I discover that a poet whose work I admire has written a libretto, my heart sinks like a stone.)

Again, I am solely to blame for this blind spot.  But I fear that it is too late to be remedied.  I have sometimes toyed with the idea of learning ancient Greek in my autumn years.  But, attend another performance of Die Meistersinger?  I'm afraid not. 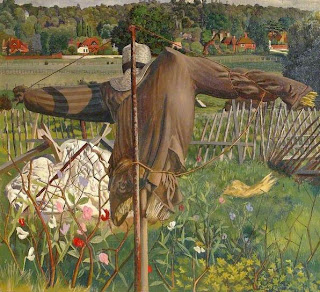 All of this leads in a roundabout way to the following poem by James Reeves.  Opera may not be to my taste, but it may nonetheless be a mirror of Life.

The lovers have poisoned themselves and died singing,
And the crushed peasant father howls in vain.
For his duplicity, lubricity and greed
The unspeakable base count is horribly slain.

After the music, after the applause,
The lights go up, the final curtain drops.
The clerks troop from the house, and some are thinking:
Why is life different when the singing stops?

All that hysteria and those histrionics,
All those coincidences were absurd.
But if there were no relevance to life,
Why were they moved to shudder and applaud?

Though they outlived that passion, it was theirs,
As was the jealousy, the sense of wrong
When some proud jack-in-office trampled them;
Only it did not goad them into song.

The accidents, the gross misunderstandings,
Paternal sorrow, amorous frustration
Have they not suffered?  Was the melodrama
An altogether baseless imitation? 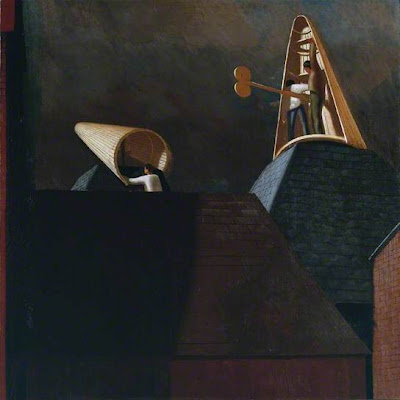 There it is, one of the most wonderful paintings in the world.
I refer to 'Swan Upping at Cookham'
which is enormous in person, as if you were in on the counting the swans for the Queen yourself.
I know you will cringe Stephen, but my heart swelled with something very close to an aria from La Boheme when I saw it and its neighbor, "Scarecrow" which I have never seen and has enriched my whole day~
Julie

Just because you don't like opera that doesn't mean you're a bad person.

And do have a go at ancient Greek, I did a year (it got really hard after that) and it taught me a lot about the English language at the same time.

Your blog is lovely, great combo of poetry and images. Will visit often. Thank you.

Julie: as always, thanks for visiting.

Yes, I've always had a soft spot for "Swan Upping" as well. I still remember encountering Spencer's work for the first time at the Tate -- ah, that was long ago! Unfortunately, I have never seen "Scarecrow" in person, but I would love to. I agree: it is a wonder, isn't it?

Don't worry, I wouldn't think to "cringe" at the thought or sight of someone enjoying opera! As I said in the post, the fault lies with me.

It's nice to hear from you again.

Mr. Henning: thank you for stopping by again, and for your thoughts. I greatly appreciate your kind words about the blog, and I'm happy that you found your way here.

Yes, I don't excoriate myself for my feelings about opera -- it's just one of those things I have never quite "gotten," I suppose. And thank you for the encouragement with regard to the Greek: I would love to be able to some day be able to recognize parts of, say, Herodotus and Homer in the original.

Thank you again. I hope you'll continue to visit.

James Reeves captures the essential absurdity of 'grand opera' in some of his lines, and I share your sentiments with regard to Wagner. I cannot stand the bombastic music and the preposterous shrieking of the singers in his operas.

However, there are some operas e.g. The Marriage of Figaro by Mozart and The Barber of Seville by Rossini, that I enjoy very much and never tire of.

A few year ago I was walking along the Thames and saw a Swan Upping boat coming towards me with the royal pennant flying. I am sure that it has a special name - it was a low clinker built boat, beautifully maintained as you might imagine. The officials were dressed in their royal regalia and to my astonishment the Chief Swan Upper (wearing blazer and peaked cap) saluted me. A very surreal experience.

I don't consider myself an opera lover either, although there are some choruses and arias that I enjoy listening to.

Given a choice between liturgical chant and opera, I would have to go with the liturgical works.

I have tried--I went so far as to get a season's ticket to the opera one year, but found myself nodding off most of the time.

I also tried a season's ticket to the ballet and found that even less interesting than opera. I did enjoy the music though.

I guess there's no hope for me.

Here is one that shares with you the same sentiment, so to speak. We don't have opera in Baghdad, and I think most of the Arabs do not really have a taste for it. however, when i come across the art in my reading, a movie am watching or documentary, i wonder what people love about it! it always sounds the property of people with refined taste, but if i would attend one show, i may feel asleep, or rush out of the theater. I like singing, and listen often to songs of different languages, music for me is a universal art, and i like melodramatic stories, though, where lovers pine for each other and end up dead for their love

Alex: yes, perhaps I am overreacting to the Wagnerian bombast (a fine word). Something that is toned down a notch or two might win me over. I appreciate your suggestions of Mozart and Rossini.

As ever, thanks for dropping by, and for your thoughts.

alice c: lucky you! I envy you the experience. And the salute is lovely! The world needs more of such things. (So says this reactionary traditionalist.)

Fred: thank you very much for making the point about liturgical music -- I love the work of, for instance, Thomas Tallis and William Byrd. Very moving and sublime.

I am in the same camp as you when it comes to ballet. Another mark against me.

N. F. Mohammad: thank you very much for visiting again, and for your comments.

I am similar to you: I love most types of music, but somehow opera doesn't move me. And as for tragic love stories, I confess that something by Hardy (Tess or Jude the Obscure, for instance) or the Brontes can hold my attention, while opera cannot. On the other hand, I can understand if those who love the opera find Hardy or the Brontes overwrought or boring.

Thanks again. I appreciate hearing from you.

"Wagner has lovely moments but awful quarters of an hour."

John B: thank you very much for the Rossini quote! I hadn't heard it before. So, perhaps I am on to something when it comes to Wagner, but I have no excuse when it comes to Rossini, Mozart, et al.

I appreciate your taking the time to visit. Please return soon.