"The Voice Of The Wind In The Night"

At this time of year, the wind often keens in the night.  A cold wind out of the north Pacific, Alaska, and Siberia.  And, occasionally, a warm wind out of the central Pacific, bringing heavy rain.  When they come, these winter winds buffet the windows and rattle the doors.

Last night, as I listened, the first two lines of a poem that I haven't read in decades returned to me:

Towards nightfall when the wind
Tries the eaves and casements . . .

I remembered nothing else of the poem.  Some things remain tucked away in our memory, waiting for the right moment to revisit us, while others seem to vanish for ever. 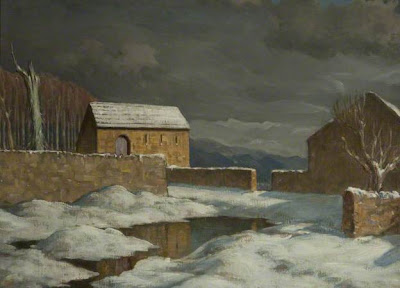 As I have noted before, Arthur Symons was fond of "grey" and "twilight" (and of "grey twilight," of course).  He was also fond of wind (often accompanied by rain) in the night.

I looked into the naked air,
Only the crying wind was there,
In wet invisible torment, tossed
About the darkness like a ghost.

My thought in me cried out and sought
Only, like wind, to fly from thought;
But like my thought the wind could find
Nowhere to hide out of the wind.

Arthur Symons, The Fool of the World and Other Poems (1906). 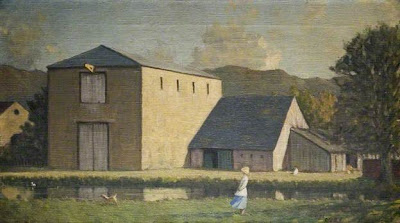 The night is light and chill,
Stars are awake in the sky,
There's a cloud over the moon;
Round the house on the hill
The wind creeps with its cry
Between a wail and a croon.

Sleep!  No sleep is about.
What remembering sin
Wakes and watches apart?
The wind wails without,
And my heart is wailing within,
And the wind is the voice of my heart. 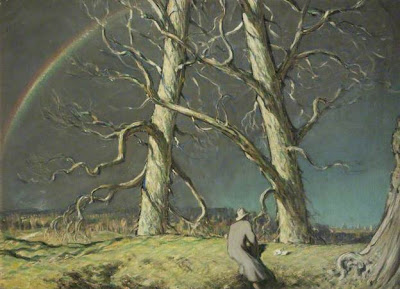 I imagine that in cold windy nights, the best thing i can do is to crawl by the fireplace, with a book in my hand (usually poems) and cup of coffee or hot chocolate. That will be a perfect poem for me to read. The sound of the wind always reminds me of Shelly's "West Wind", or that scene in Wuthering Heights, when Heathclif opens the window and asks for Cathrine's ghost to haunt him and visit him as it visited Mr Lockwood's imagination.

Marvellous. Wind poems are so delociously physical; you can almost feel them buffeting you as you read. Two more of my favorites are Ted Hughes's "Wind" and Robert Herrick's "The Hag".

N. F. Mohammad: thank you very much for stopping by again, and for those thoughts.

Shelley's Ode is appropriate, isn't it? For example: "O Wind/If Winter comes, can Spring be far behind?" And Emily Bronte is very appropriate as well: her poetry is full of (usually cold) winds: "The night is darkening round me/The wild winds coldly blow . . ."

Thank you for bringing those two to mind.

Jan: thank you very much for visiting, and for your thoughts. And thank you as well for the references to the poems by Hughes and Herrick, neither of which I have read. I will track them down. Thanks again.

Ah, so many poems about the winds, Mr. Pentz. One of the more unusual and an old favourite of mine - "what if a much of a which of a wind" by e.e.cummings. Blew me away, so to speak.

Mr McEwan: thank you for the reference to the poem by cummings -- I hadn't heard of it before (but, then, my knowledge of his poetry is limited, I'm afraid). I've tracked it down on the Internet. I confess that most of his poetry leaves me scratching my head. But I do like this one (although I'm still not certain that I get it).

As ever, thanks for stopping by.