Any exploration of how we look at (or see) the World should include a visit to the poetry of Wallace Stevens.  For Stevens, a life well-lived is one in which there is a continual back-and-forth between the Imagination and the World (Reality).  Thus:  "Let the place of the solitaires/Be a place of perpetual undulation// . . . There must be no cessation/Of motion . . . And, most, of the motion of thought/And its restless iteration,//In the place of the solitaires,/Which is to be a place of perpetual undulation."  (Wallace Stevens, "The Place of the Solitaires," from Harmonium.)

In his earlier poems, one gets the sense that Stevens believed that we are capable of creating imaginative structures that can transcend the everyday world.  However, as he aged, I think that he began to take a humbler view of our role in this back-and-forth.

He still recognized the importance of Imagination -- after all, he kept on creating poems into his seventies -- but one senses a less imperious attitude toward the World.  This softening is often very moving, particularly in the poems that he wrote in his last years.  The following poem is the final poem in Stevens's final book, which was published when he was 75. 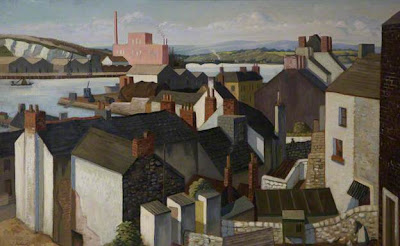 "It was like/A new knowledge of reality" is a lovely and wonderful (and humbling) acknowledgement to make at the end of one's life, isn't it? Especially when, like Stevens, you have devoted your life to extolling the primacy of the human Imagination.  Notice the repeated use of "outside" when referring to things in the World:  "a scrawny cry from outside . . . It would have been outside . . . The sun was coming from outside."  The thing itself -- unlike ideas about the thing -- comes from outside and stands on its own.

A side-note: for further paeans to the sun, I recommend Philip Larkin's "Solar" ("suspended lion face") and Charles Madge's "Solar Creation" ("the sun, of whose terrain we creatures are"),  as well as Stevens's own "The Brave Man" ("The sun, that brave man"), which have appeared here previously. 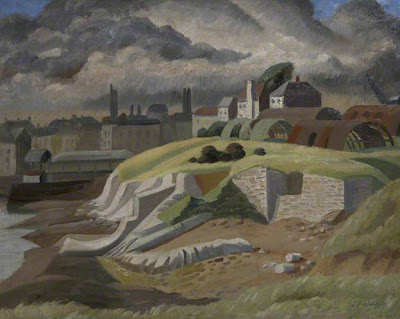 A statement by John Ruskin is perhaps pertinent:  "The greatest thing a human soul ever does in this world is to see something, and tell what it saw in a plain way.  Hundreds of people can talk for one who can think, but thousands can think for one who can see.  To see clearly is poetry, prophecy, and religion -- all in one."  Modern Painters, Volume III, Part IV, Chapter XVI (1856). 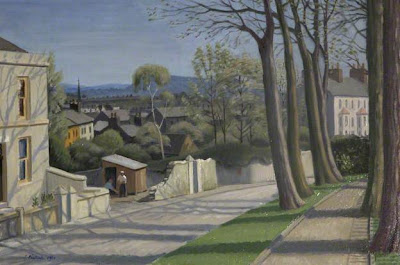 stephen: came in once more, and was gladdened by both your warm response and your new post.

the title of this post is a subject that i contemplate daily...the distance between fact and idea, the fallibility of perception, false assumptions and their consequences, and the necessity of simple seeing, untinged with thought (which is born of association, experience, memory).

you must be familiar with this,but would still like to share Blake's lines with you, that help me very much:
“If the doors of perception were cleansed every thing would appear to man as it is, Infinite. For man has closed himself up, till he sees all things thro' narrow chinks of his cavern.”

anjali: thank you very much for your thoughts, and for the lines from Blake, which are very appropriate in this context. It is a constant struggle to see things afresh every day, isn't it? A difficult task, especially with all of the distractions that are thrown at us.

Wallace Stevens wrote another poem, “The Snow Man”, which follows along the theme that you noted, to wit: “The thing itself -- unlike ideas about the thing -- comes from outside and stands on its own.”

In “The Snow Man” Wallace is speaking of the difficulty, albeit the necessity, of trying to empty our minds of our “ideas about the thing” in order to fully “know” the thing itself.

This one sentence poem, in paraphrase, is saying that “One must have a mind of winter” ... “and have been cold a long time”, (i.e. like a snow man), to be able to not impute our “ideas” about some “misery” that the sounds and sights of winter engender.

Stevens closes out the poem with reflections that the “thing” that is the sound of the wind of winter is nothing other than just that.

I have read the poem many times and am always beguiled by the ambiguity and the mystery and the beauty of the last stanza.

Mr. Oberman: thank you very much for visiting, and for your thoughts on "The Snow Man" and "ideas about the thing."

I sometimes think of "The Snow Man" as a kind of precursor to the sort of poem that Stevens began to write in his sixties and seventies. I've always thought that both its content and its language seem out of place in all of the floridness and bric-a-brac of Harmonium. (Not that I don't like the floridness and bric-a-brac now and then, but I prefer the later Stevens.)

I think that your comments are right on target. And I agree with you about the last stanza: I never tire of its mystery and beauty either.