Today, on my afternoon walk, I came to the conclusion that I have failed to give clouds the attention they deserve.  I am not speaking of scientific attention.  I do not need to know their types.  Nor do I need to know the details of how they are formed.

I once lived in a place where the sun set into the Indian Ocean.  To the west, there was nothing but water, sky, and clouds.  In terms of grandeur, nearly every evening was the Grand Canyon of Cloudland. 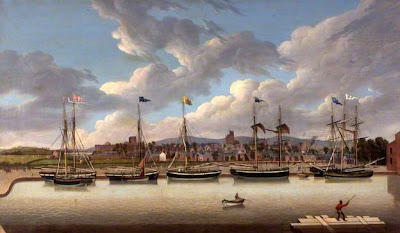 Now dewy nights again and rain in gentle shower
At root of tree and flower have quenched the winter's drouth.
On high the hot sun smiles, and banks of cloud uptower
In bulging heads that crowd for miles the dazzling south. 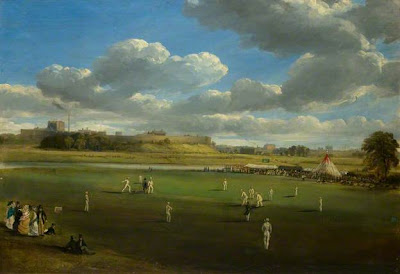 Spring goeth all in white,
Crowned with milk-white may:
In fleecy flocks of light
O'er heaven the white clouds stray:

White butterflies in the air;
White daisies prank the ground:
The cherry and hoary pear
Scatter their snow around.

The poem is untitled.  The OED defines "prank" (line 6) as "to adorn; to make colorful; to brighten up with." 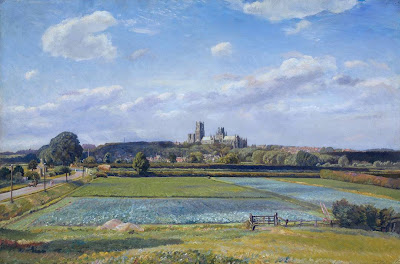 Mr Pentz, I suspect that most of us do not truly give the world the attention it deserves; we fail to look and fail to notice. Recently while working at my allotment I realised how little I had really looked at the earth; the soil I was digging and hoeing; the textures and colours, and like you,when pausing to rest from my digging I too have begun to notice clouds. Thank you for the reminder, there can never be too many.
The second Bridges poem is beautiful. Walking at lunchtime today in the Spring sunshine, daisies were "pranking" the grassy banks beside my path. Thank you.

Below is Shelley's poem "The Cloud." Shelley is not to everyone's taste, but some find this particular poem a delight to read aloud, the rhyme and meter, the alliteration and assonance, the "sound" of the poem, equal to the best of Tennyson.

I bring fresh showers for the thirsting flowers,
From the seas and the streams;
I bear light shade for the leaves when laid
In their noonday dreams.
From my wings are shaken the dews that waken
The sweet buds every one,
When rocked to rest on their mother's breast,
As she dances about the sun.
I wield the flail of the lashing hail,
And whiten the green plains under,
And then again I dissolve it in rain,
And laugh as I pass in thunder.

I sift the snow on the mountains below,
And their great pines groan aghast;
And all the night 'tis my pillow white,
While I sleep in the arms of the blast.
Sublime on the towers of my skyey bowers,
Lightning, my pilot, sits;
In a cavern under is fettered the thunder,
It struggles and howls at fits;
Over earth and ocean, with gentle motion,
This pilot is guiding me,
Lured by the love of the genii that move
In the depths of the purple sea;
Over the rills, and the crags, and the hills,
Over the lakes and the plains,
Wherever he dream, under mountain or stream,
The Spirit he loves remains;
And I all the while bask in Heaven's blue smile,
Whilst he is dissolving in rains.

The sanguine Sunrise, with his meteor eyes,
And his burning plumes outspread,
Leaps on the back of my sailing rack,
When the morning star shines dead;
As on the jag of a mountain crag,
Which an earthquake rocks and swings,
An eagle alit one moment may sit
In the light of its golden wings.
And when Sunset may breathe, from the lit sea beneath,
Its ardors of rest and of love,
And the crimson pall of eve may fall
From the depth of Heaven above,
With wings folded I rest, on mine aery nest,
As still as a brooding dove.

That orbed maiden with white fire laden,
Whom mortals call the Moon,
Glides glimmering o'er my fleece-like floor,
By the midnight breezes strewn;
And wherever the beat of her unseen feet,
Which only the angels hear,
May have broken the woof of my tent's thin roof,
The stars peep behind her and peer;
And I laugh to see them whirl and flee,
Like a swarm of golden bees,
When I widen the rent in my wind-built tent,
Till the calm rivers, lakes, and seas,
Like strips of the sky fallen through me on high,
Are each paved with the moon and these.

I bind the Sun's throne with a burning zone,
And the Moon's with a girdle of pearl;
The volcanoes are dim, and the stars reel and swim
When the whirlwinds my banner unfurl.
From cape to cape, with a bridge-like shape,
Over a torrent sea,
Sunbeam-proof, I hang like a roof,--
The mountains its columns be.
The triumphal arch through which I march
With hurricane, fire, and snow,
When the Powers of the air are chained to my chair,
Is the million-colored bow;
The sphere-fire above its soft colors wove,
While the moist Earth was laughing below.

I am the daughter of Earth and Water,
And the nursling of the Sky;
I pass through the pores of the ocean and shores;
I change, but I cannot die.
For after the rain when with never a stain
The pavilion of Heaven is bare,
And the winds and sunbeams with their convex gleams
Build up the blue dome of air,
I silently laugh at my own cenotaph,
And out of the caverns of rain,
Like a child from the womb, like a ghost from the tomb,
I arise and unbuild it again.

It's odd how some places are good cloud country. Where my mother lives in NSW, near Yass, is astonishing. Whenever I drive her into town, (rather often), our conversation usually at some point turns to the clouds we can see. Looking at clouds is the best way I've ever found to get a sense of perspective about our place in the universe.

And we can't forget the clouds of Marvin Cone!!

Mr Aston: yes, we need to constantly remind ourselves to pay attention -- at least I do. I'm about to dive into reading Ruskin on clouds: now, there's someone who never failed to pay the closest attention to everything!

I know what you mean about soil: whenever I weed the garden, I'm always amazed at how much is going on in the earth.

"Prank" is a rare one, isn't it? I came across "prink" a long time ago in a poem by Wallace Stevens, so I had an inkling of what "prank" was about when I encountered it.

As ever, I greatly appreciate hearing from you.

Mr Floyd: thank you for reminding us of "The Cloud." "I change, but I cannot die" kind of embodies the Romantic soul, doesn't it? On another note, it is interesting that "April, 1885" also contains internal rhyming.

Mr Jarvik: thank you very much for visiting, and for the link. I visited The Cloud Appreciation Society many years ago, but I had completely forgotten about it. I greatly appreciate your reminding me of it.

Your reference to the Society makes me want to revisit Richard Hamblyn's The Invention of Clouds, which I suspect you have read.

zmkc: it's very nice to hear from you again.

Unfortunately, I have never been to Australia, so I am not familiar with Yass (apart from some posts by you on your blog, of course). However, looking at some images of it and its environs on the Internet, it does seem to be proverbial "big sky" country.

I know what you mean about certain places being "good cloud country." In addition to my Indian Ocean experience, another such place that springs to mind is the Isle of Skye: astonishing!

Your point about the perspective that clouds give us is excellent. I recall very clearly having a particularly strong sense of this when flying above and through some massive sun-penetrated clouds when coming in for a landing in Seattle through the Cascade Mountains. It seemed like a whole other world unto itself, separate and apart from -- and dwarfing -- ours.

Thank you very much for those thoughts.

Anonymous: thank you very much for visiting, and for the reference to Marvin Cone, who I was not aware of. I agree: his cloud paintings are wonderful! I did some searching and came across the Cedar Rapids Museum of Art, where I found (just one example) his "Storm Clouds over Church": beautiful.