William Wordsworth's best expression of "mutability" is, I think, found in the eight short lines of "A slumber did my spirit seal," which has appeared here previously.  Like the best Japanese and Chinese poems, it is long on nouns and verbs and short on adjectives and adverbs:  "Rolled round in earth's diurnal course,/With rocks, and stones, and trees."  An instance of less being more -- without any loss of emotional impact.

Of course, Wordsworth was wont to go on at greater length, and with less economy, as Romantics tend to do.  Thus, he -- like Shelley -- wrote a poem titled "Mutability."  The poem was written later in his life, long after he had been excoriated by Shelley and others for being too conservative.  (Some things never change.) 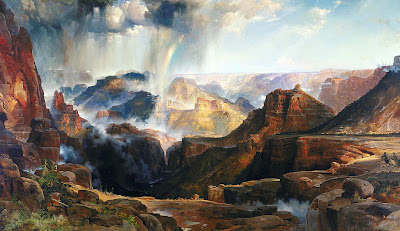 From low to high doth dissolution climb,
And sink from high to low, along a scale
Of awful notes, whose concord shall not fail;
A musical but melancholy chime,
Which they can hear who meddle not with crime,
Nor avarice, nor over-anxious care.
Truth fails not; but her outward forms that bear
The longest date do melt like frosty rime,
That in the morning whitened hill and plain
And is no more; drop like the tower sublime
Of yesterday, which royally did wear
His crown of weeds, but could not even sustain
Some casual shout that broke the silent air,
Or the unimaginable touch of Time.

"Truth fails not."  Is that "Truth" or "truth"?  Either way, I'm not so sure.  Unless the truth he speaks of is "the unimaginable touch of Time." 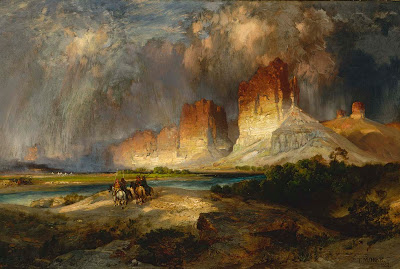 As in my previous post, a Japanese poem may provide a nice balance to that trademark Romantic combination of effusiveness and melancholy.

As I noted above, long on nouns and verbs.  But as lovely and as straight-to-the-heart-of-things as poetry can get.  "The unimaginable touch of Time," put differently. 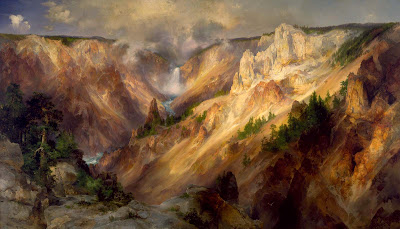 I always have the sense when reading Wordsworth of the reverse Midas: all those glittering jewels he gathers from the natural world turn to dust as he examines them in his hands. One can see in this poem why he is so esteemed among the current (mutable?) crop of critics. The mind struggles in vain to keep up with the flux of his observation - a nice resolution to the concept of mutability, since even the process of change can't be held onto.

Your use of Asian contrasts here has been masterful, Mr Pentz, shining up these great Romantic apples even more. This Saigyo verse is almost as elusive as Wordsworth's. Is it the filament or the dew that cloys our expectations? Quite a lot, at any rate, to contemplate this fine spring morning.

I have to say that the Haiku doesn't give such indigestion! I love the way language alters over time.

Mr. Sigler: I know what you mean about Wordsworth. Which is perhaps why I value a poem such as "A slumber did my spirit seal": it shows that he was capable of getting past the rhetoric and the prettifying if he had a mind to. I find such moments of direct emotion rare in Wordsworth.

Saigyo, of course, is another matter. The emotion is there, but in the usual understated Japanese fashion. I understand what you are getting at with the filaments versus the dew drops. Actually, there are at least three levels of "mutability" present in the poem, aren't there? -- the drops of dew, the filaments of the spider web, and our life itself. The ability of the Japanese (and Chinese) poets to be this straightforward, yet evocative, never ceases to amaze me.

Bovey Belle: yes, there is quite a contrast between Wordsworth and Saigyo, isn't there? But it goes to show that these feelings are universal -- just expressed differently. The Japanese poets tend to be able to pare these things down quite a bit. We require more words, it seems. But we need them both, I think.

It's nice to hear from you again. Thank you for stopping by.