"For Once, Then, Something"

In "Bond and Free," which appeared in my previous post, Robert Frost considers the relative claims of Love and Thought (or, earth and stars).  I suggested that Frost may not view Love and Thought as an either/or proposition, despite the suggestion in the poem's final stanza that Love trumps Thought.

Frost often confounds our expectations.  He is not the cracker-barrel Yankee philosopher that he is often made out to be.  The best example of this is, I think, "The Road Not Taken."  The closing lines ("I took the one less traveled by,/And that has made all the difference") have been turned into a self-help exhortation.  In fact, the poem can be read as a rueful (and ironic) expression of regret at having chosen that road.

In the following poem, Frost goes beyond the earth and the stars to look below ground.  In doing so, he may give us a closer approximation of how he sees himself (and us).  The Frostian slyness is still present, but there is a bit of self-revelation as well. 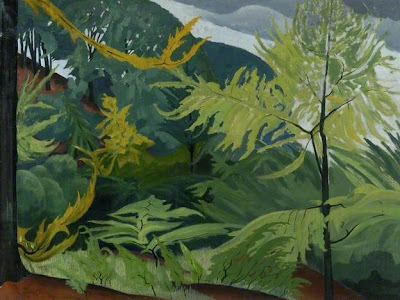 For Once, Then, Something

Others taunt me with having knelt at well-curbs
Always wrong to the light, so never seeing
Deeper down in the well than where the water
Gives me back in a shining surface picture
Me myself in the summer heaven godlike
Looking out of a wreath of fern and cloud puffs.
Once, when trying with chin against a well-curb,
I discerned, as I thought, beyond the picture,
Through the picture, a something white, uncertain,
Something more of the depths -- and then I lost it.
Water came to rebuke the too clear water.
One drop fell from a fern, and lo, a ripple
Shook whatever it was lay there at bottom,
Blurred it, blotted it out.  What was that whiteness?
Truth?  A pebble of quartz?  For once, then, something.

I have noted on another occasion that Philip Larkin, who greatly admired Edward Thomas, has made one of the acutest observations about Thomas and his poetry.  I believe that this observation applies to Frost and his poetry as well:

"What a strange talent his was:  the poetry of almost infinitely-qualified states of mind, so well paralleled by his verse." 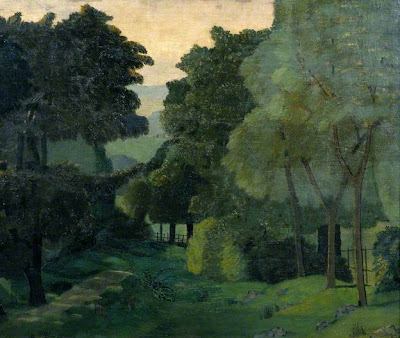 You are meant to be able to see the stars in the sky in the bottom of a well in daytime, but it's a myth. Frost almost sounds like he was scrying . . .

I love the Philip Larkin comment about Thomas's work (spot on) and you have again sent me on another journey of exploration which has brought me to a serendipitous shore. Thank you. Oh, and Happy Easter (almost belatedly).

Just a note about Frost's "The Road Not Taken": years ago when I read Ernest Becker's "The Denial of Death," Becker, quoting from A. N. Whitehead, I think, says that one of the two great truths of life is "things fade." He didn't mention what the other great truth of life is. I don't know that human life can be compressed into two great truths, but I was curious to know what the second truth is. For years I could not find out what it was.

One day I picked up a battered paperback copy of John Gardner's "The Wreck of Agathon," and in it I found mentioned the two great truths of life. One is, as Becker mentions, "things fade"; the other is "alternatives exclude."

In "The Road Not Taken" Frost says that he took one road rather than another--and it seems to have made "all the difference." Is it fair to say his life would have different had he chosen the other road? Does Frost think so, do you think? Do you think it matters to him? Does Frost think he chose wisely or not?

A note to the poem in "The Norton Anthology of Modern Poetry" says that according to Lawrance Thompson the poem is referring to the walks Frost took with Edward Thomas. Thomas would choose a way to go and then "berate himself for not choosing a more interesting way." Thompson says "Frost did not approve of romantic 'sighing over what might have been.'"

Bovey Belle: it's good to hear from you again.

Stars at the bottom of the well: that's a lovely thought.

I have found that Larkin's comments on other poets are nearly always right on target. But then I'm in Larkin's camp on most things. I highly recommend his prose collections Required Writing and Further Requirements. Like his poems, his critical comments are insightful and witty.

Happy Easter to you as well. As ever, I appreciate your stopping by.

Mr Floyd: thank you very much for "the two great truths" -- I hadn't heard of that before.

As for "The Road Not Taken," and Frost's feelings about the path he chose, "I shall be telling this with a sigh" may be thought to provide a clue. Edward Thomas, after reading a draft of the poem that was sent to him by Frost, thought so.

But Frost claimed that it was a "mock sigh." Frost also said: "I don't suppose I was ever sorry for anything I ever did except by assumption to see how it would feel." However, one has to take these sorts of statements by Frost with a grain of salt. He was not prone to self-revelalation, as you know.

I agree that Frost was not one to approve of "romantic 'sighing over what might have been'." But regret is another matter, I think, and does not invariably involving sighing.

If you could bear another comment (I'd hate to become Polonius) about whether Frost had regrets about his choices in life (to touch, tangentially at best, once again, on "The Road Not Taken,") here are two observations by men who may, or may not, give us some indication of how Frost felt about how he had lived his life, whether he ever asked himself, "what if I had done differently?"

The first is from Donald Hall's book "Their Ancient Glittering Eyes," in which he says about Frost: "He was a guilty man, guilty over wrongs he felt he had done to people he loved--the same guilt that Ezra Pound lived with, the same guilt, I suppose, that tormented T. S. Eliot in middle life. Therefore, perhaps, he courted love, any love, even the kind he took from his Stanford audience, to assuage his conviction that he was bad. The need for love and applause was a need for forgiveness. And when he received the love he asked for, he rejected it, and then he asked for more." How perspicacious is Hall? I don't know. It's strong stuff.

Another look at Robert Frost comes from another poet, this one Robert Lowell. Lowell writes of Frost in a sonnet:

Robert Frost at midnight, the audience gone
to vapor, the great act laid on the shelf in mothballs,
his voice musical, raw and raw—he writes in the flyleaf:
"Robert Lowell from Robert Frost, his friend in the art."
"Sometimes I feel too full of myself," I say.
And he, misunderstanding, "When I am low,
I stray away. My son wasn't your kind. The night
we told him Merrill Moore would come to treat him,
he said, 'I'll kill him first.' One of my daughters thought things,
knew every male she met was out to make her;
the way she dresses, she couldn't make a whorehouse."
And I, "Sometimes I'm so happy I can't stand myself."
And he, "When I am too full of joy, I think
how little good my health did anyone near me."

If Lowell acute in his judgment of Frost, on to something. Again, how can we know? The end of Lowell's poem, however, gets our attention. Did Frost really say this to Lowell?

In the end, perhaps.we should just judge Frost on the worth of his poems, finding that assessing whether his poems are good is more important than trying to sum whether he was a bad man or not. People can decide for themselves.

The consensus would be, I'd wager, that he's certainly a major American poet, one who is not, as you aptly said, a mere rustic New England eccentric sitting around a pot-bellied stove and uttering bromides, rehashing the most tiresome banalities.

He's a poet with deep philosophical ramifications, a poet with a position, with something to say; and of course his technical skills as a poet are unequalled.

When all is said and done, do you think, we can try to put what Hall and Lowell say about Frost the man into some kind of abeyance, off to the side somewhere, and deal with only the poetry?

All I know is that Frost is a poet whom I read frequently and he is a poet whom I enjoy reading, one who, if I am forced to say what one thing he tells me, reminds me that we have to learn somehow how to live in the world the way it is, not as we wished it to be.
The most we can hope for, as he says in "Birches" is to climb toward heavens a bit, but in the end we must return to earth, the place where we will find our purpose and understanding, if they are to be found at all. Frost says that a poem is "a momentary stay against confusion." Are these moments the best we can hope for in what some would call an inscrutable world? I don't know. The struggle to answer such vexing questions are carried out in poetry, this "quarrel we have with the world."

Interesting to bring up "The Road Not Taken" and Frost's great friend Thomas. As I understand it, the poem is rather less profound when read as Frost's gentle chiding of Thomas's perpetual second-guessing of himself. That is, Thomas couldn't even go for a walk with Frost without reprimanding himself for taking the wrong path. Deflates the somewhat overblown readings of the poem.

Mr Floyd: thank you very much for your follow-up comments, and for the material from Hall and Lowell. I think that Hall's comments are close to the mark. As for the veracity of Lowell's version, who knows when it comes to Lowell? He did have a habit of selectively mining his past.

But you are right: the ultimate question is: how do we reconcile the life and the poetry? Or, do we even have to consider the life? Ezra Pound is the best-known example. And, of course, Larkin was excoriated after his death for political incorrectness. The list goes on. But, when all is said and done, I'll go out on a limb and predict that Frost's and Larkin's poetry will be remembered a hundred years from now.

Anonymous: although "The Road Not Taken" may have been prompted by Frost's thinking about Thomas's walking habits, I wouldn't say that this "deflates" the poem. After all, wouldn't you agree that most poems are prompted by prosaic observations or events that take on another life in the poem?

Thus, the fact that "I wandered lonely as a cloud" had its inception in a casual walk taken by Wordsworth and his sister Dorothy along the shores of Ullswater doesn't make it simply a recounting of a pleasant walk in which they encountered a field of daffodils, don't you think?

Or consider Eliot's comments about "The Waste Land": "To me it was only the relief of a personal and wholly insignificant grouse against life; it is just a piece of rhythmical grumbling." Well, yes and no.